Although scholars have debated the exact meaning of Thomas Jefferson’s reference to the pursuit of happiness in the Declaration of Independence, the phrase can be traced to seventeenth-century philosopher John Locke’s “life, liberty, and property” philosophical trinity and his declaration that the pursuit of happiness was our “greatest good.” Regardless of Jefferson’s specific intentions when he penned the phrase, the neuroscience literature supports the importance of the pursuit of happiness, as opposed to the mere acquisition of financial or material resources. Interestingly, when rodents are trained to press a bar for a hit of neurochemical happiness in the form of cocaine delivered to their brains, the activity of the neurotransmitter most often associated with pleasure, dopamine, isn’t maximally activated during the actual chemical delivery. Alternatively, the most intense dopamine activity is evident during the animal’s approach to the bar in anticipation of receiving the cocaine administration. Thus, simplistically speaking, the rodents in these studies appear to be their happiest during the pursuit of their pharmacological reward.

Although the term prosperous is generally associated with doing well and thriving, it is often measured by financial success. This financial success is thought to enhance prosperity by providing resources to outsource life’s menial tasks such as cooking, cleaning, and yard work. Sounds good to me! However, rodent research in my laboratory suggests that the pursuit of life’s sweet rewards, instead of having these rewards handed to us, may indeed be essential for thriving and flourishing. When rats are required to exert a little physical effort to receive their coveted Froot Loop cereal rewards, they exhibit emotional resilience through enhanced exploration, reduced anxiety, and healthier stress hormone levels when compared to animals merely given their rewards (known in our lab as the trust fund rats). Although I’m hesitant to attribute terms such as self-agency to rodents, when presented with a challenging task, the working contingency-building rats exhibit more persistence and have healthier markers of neuroplasticity than the trust fund, noncontingent rats.

Regardless of one’s financial prosperity, research with humans suggests that physical hobbies provide a buffer against the onset of psychiatric illness. Knitting, for example, was prescribed by physicians over a century ago for women deemed overwrought with anxiety. Unpacking the potential effects of this vintage prescription for psychiatric illness, the repetitive use of the hands may activate serotonergic activity (a neurochemical modulator of mood), planning and counting the stitches serve as a cognitive distraction from existing worries, and seeing the beautifully knitted object likely leads to activation of the dopamine (reward) neurochemical. If knitting is done in the company of friends, then the neurochemical oxytocin, which facilitates social bonds and calms stress, is activated. Considering the multiple ways knitting changes one’s neurochemistry, knitting was indeed an effective prescription for anxiety—the first behaviorceutical prescription!

If stress makes a brain vulnerable to psychiatric illness, then any means of avoiding chronic and unnecessary stress is a valuable boost for maintaining a prosperous brain. One contributor to stress is the feeling of uncertainty. The stakes vary in specific situations—uncertainty about what to order for dinner isn’t as impactful as the uncertainty about selecting the best job offer—
but any form of uncertainty can wear down our neural circuits, leading to mental illness. When Russian physiologist Ivan Pavlov taught his dogs that one shape was associated with a reward and another shape was associated with punishment, he increased their uncertainty when he merged the two shapes—a circle and ellipse—so that the dogs couldn’t discern the specific shape. He reported that the dogs were deeply disturbed during this trial, showing evidence of neurosis—biting and ripping their leashes.

So, how do healthy brains navigate all the uncertainty in life? Relevant experiences provide information that boost our confidence when making decisions. We build our contingency capital, or previous experiences with outcomes that are contingent on certain responses, by gaining new and relevant experiences. When we enhance the behavioral and cognitive capital of rats through training and exposure to enriched environments, we see more adaptive behavioral and neurochemical profiles.

In addition to stockpiling knowledge and relevant experiences, a quick examination of our brain’s real estate confirms that a majority of space is devoted to movement. With our neuron- dense cerebellum at the back of our brain involved in motor coordination, the large component of the center of our brain known as the striatum involved in fine-tuning our movement and the large strip of cortex devoted to the movement of individual body areas our brains most certainly evolved to move! Although our contemporary society values an environment characterized by sitting passively in front of devices, this may not be healthy for our brains. In 1939, when the New York Times published an article describing the new television that was recently introduced at the World Fair, the article declared that the television wouldn’t be popular since people didn’t have time to sit in front of a screen. By contrast, radios allowed the audience to move around and work while being entertained by various broadcasts. Our acceptance of sitting in front of screens has certainly changed over the past century. The outcome of this interesting lifestyle experiment has yet to be determined.

Thus, although we are more likely to associate financial assets with one’s prosperity, evolution suggests that experiences with authentic responses with our social and physical environments provide the most valuable and relevant security for our future—in the form of rich neural networks and a diversified portfolio of adaptive responses.

Kelly Lambert is an award-winning professor of behavioral neuroscience at the University of Richmond and author of four previous books, including Lifting Depression and The Lab Rat Chronicles. 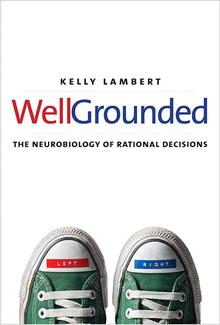