Marcel Duchamp had a large role in his own enshrinement at the Philadelphia Museum of Art. He helped the Los Angeles collectors Walter and Louise Arensberg to form their outstanding holdings of modern art, including the largest, most complete assembly of his own works. In 1950, he advised the Arensbergs to donate the entire collection to Philadelphia, and he supervised its installation four years later in a new modern wing within that museum’s grand neo-classical building. It was an auspicious moment for the Philadelphia Museum of Art, but no less so for Duchamp, since it set up the core of his oeuvre in a public institution and as a kind of living memorial to him. 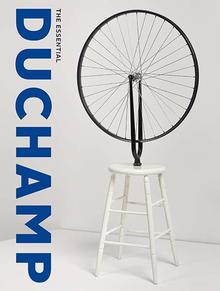 The Essential Duchamp, an introduction to the artist’s art and life based on the collections of the Philadelphia Museum of Art, offers an opportunity to reflect on the paradox of the situation. Duchamp was happy to have in one place such a large proportion of his life’s output, including numerous paintings, works on paper, examples of the objects known as the readymades, and The Bride Stripped Bare by Her Bachelors, Even (also known as The Large Glass, 1915-23), a nine-foot-tall painting on glass that was the linchpin of his early career. In a television interview conducted at the museum in 1955, Duchamp underlined his great satisfaction by stating that the building felt like a second home to him. We can take Duchamp at his word. But we should also consider that he was hardly sanguine about art museums as institutions. In fact, he had long expressed major qualms about their aesthetic and social functions.

To trace Duchamp’s attitude toward museums, we have to go back to a watershed moment in his early career. Not long after completing Nude Descending a Staircase (No. 2) (1912), the picture that triggered his first burst of fame when it was exhibited at the Armory Show in New York in 1913, Duchamp went through a life-changing bout of self-questioning. He felt it was time to choose between two different ways of operating. Either he could be integrated as an artist into society—and create with the expectations of the public in mind—or he could go underground for the sake of his own artistic freedom.

Duchamp decided to stop treating art as a profession in an ordinary sense. For many years he avoided exposing his newer works in exhibitions. He also managed their circulation on his own, mainly within a close circle of friends and associates. And he found other ways of connecting with the economic and social system in which artistic careers were set up and reputations sustained. Starting in 1920, he helped manage an experimental, non-commercial museum called the Société Anonyme, Inc., one of the first organizations that promoted modern art in New York. Also, after coming into his inheritance in 1925, he developed a side activity as an investor and dealer in works by artists whom he admired. But through it all, Duchamp refused to reconcile himself intellectually with the “art game,” his term for the system of professional advancement and rewards available to the artists of his time. He was extremely critical of artists and dealers for chasing money and fame. He also believed that the art museum’s implication in the market neutralized its claims of aesthetic idealism and social utility.

Duchamp’s grave doubts about museums as institutions flowed in part from an idea that pops up in his writings and interviews of the 1950s and 1960s. Sometimes he compared artworks to flowers that bloom briefly only to lose their freshness or mysterious allure; other times, he stated that works of art are mortal, just like their makers. In this, he joined a long history of modernist reflection on museums as mausoleums. Like F. T. Marinetti, the iconoclastic leader of the Italian Futurist group, who declared in the “The Founding and Manifesto of Futurism” (1909) that museums should be visited once yearly at most, as one might visit a family burial vault, Duchamp believed that the dead had too strong a hold over the living. Like the French poet Paul Valéry, who likewise compared museums to cemeteries in an essay entitled “The Problem of Museums” (1923), Duchamp thought that the museum’s institutional brief to classify, conserve, and present its collections for the edification of a broad public merely bred vulgarization.

Duchamp parted with Valéry, however, in understanding the “problem of museums” in terms of a developed critique of the social and economic system within which art is produced and consumed. This analysis flowed, in part, from to Duchamp’s key innovation and most radical gesture, readymades: functional, store-bought objects that gained unexpected meanings when placed in artistic contexts. The readymade crossed the line between fine art and mass production, challenged the priority of the artist’s hand, and worked against the value of the unique object. But this same critique was no less relevant to other key creations by Duchamp. Think of Box in a Valise (1935-41), the portable assortment of his most important works in miniature reproduction, or Étant donnés (1946-66), a room-sized, three-dimensional diorama that came to be permanently installed at the Philadelphia Museum of Art in the summer of 1969, less than a year after the artist’s death. Unique in Duchamp’s oeuvre for having been conceived as a lasting museum installation, Étant donnés mounted an idiosyncratic and aggressive challenge to the basic premises of spectator experience in the museum while simultaneously completing its maker’s immortalization within a particular one.

And yet, despite his negative feelings about art museums, the question of posterity meant a lot to Duchamp. For him, posterity entailed the judgment of the viewer who would eventually complete the act of creation by interpreting the work. He sometimes claimed with a touch of avant-gardist idealism to be working in defiance of the contemporary public and only for an ideal public of the future. In the end, Duchamp was realistic about the “problem of museums.” He approached it as a challenge to be addressed but never to be solved because museums were structurally essential to the art game as it existed in modern times. These days, museums still thrive as institutions for presenting the history of art to a broad public. But the tradition of Duchampian art that offers a critique of the museum’s decorums and ideals is also alive and well.

Matthew Affron is the Muriel and Philip Berman Curator of Modern Art at the Philadelphia Museum of Art.