The midterm elections are over, and the Democrats have taken back the House. They now need an agenda that signals to the electorate what they are for, not just what they are against. It’s unlikely that much will get done between now and 2020, but if the next two years are consumed by attacks and investigations of the Trump White House, it will not help the Democratic cause. As the president has said, he is better at that game than they are.

So, what are the issues that might bolster their cause? There are many and that is part of the problem. Without a clear focus on one or two and a simple message, policy talk will get drowned out by the daily tweets emanating from the president, the latest news in the Mueller probe, and new natural disasters or significant foreign developments that are impossible to predict.

The focus should be on work. In focus groups I have done with middle and working-class Americans, what they want above all else is well-paid jobs. Most of them get their health care through their employers, so talk of Medicare for all, in addition to being hugely expensive and disruptive, will not have the broad appeal of a focus on good jobs with decent benefits. Work provides more than just income. It provides self-respect, as well as a sense of contributing and of being connected to the larger society.  The dignity of work is not just a slogan; it is a reality that has been neglected in talk of a universal basic income, single payer health care, or a more generous social welfare system. The safety net should be protected but should not be the primary source of most people’s incomes.

What that means in practice is investing in vocational training, including work-based learning through apprenticeships or similar mechanisms; boosting take-home pay by cutting or offsetting the payroll taxes that can take as much as 15 percent out of a modest paycheck; and providing tax incentives to businesses that train and share profits with their workers.

I propose a “worker tax credit” that would offset most payroll taxes for those with modest earnings.  It is a first cousin of the very successful Earned Income Tax Credit but would be simpler (because it is based only on earnings and not on family size and family income) and would help virtually everyone with earnings of less than $40,000 a year. The focus groups I convened this year do not want handouts; they want jobs and they want to be self-sufficient. They take pride in what they do, but feel both underpaid and underappreciated. They believe they deserve to keep more of what they have earned. A worker tax credit would achieve this goal.

We can easily pay for these work-based initiatives by revising the 2017 tax law, including taxing the estates of the top 1 percent at a reasonable level. Right now, the only people who pay even a penny of estate tax are those with estates worth more than $11 million per individual or $22 million per couple. Their children are already doing very well, will get an unearned windfall when their parents die, and do not need many millions more free of tax. If we fail to curb these tax-free bequests, not only will we be forfeiting a lot of revenue (more than $70 billion a year), but we will be creating a society in which inherited wealth plays an ever-increasing role in worsening what is already an unprecedented degree of income inequality. Assets beget income which, when saved, begets more wealth in an unending spiral in which incomes at the top run away from everyone else’s.

We can put a stop to rising inequality in a way that is consistent with American values and the preferences of most voters by taxing wealth instead of work, investing in human capital, and giving a boost to the paychecks of lower-wage workers.

Isabel Sawhill is a Senior Fellow at the Brookings Institution. 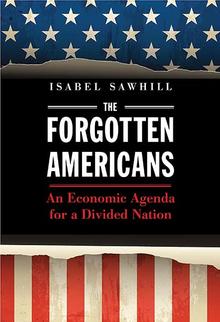