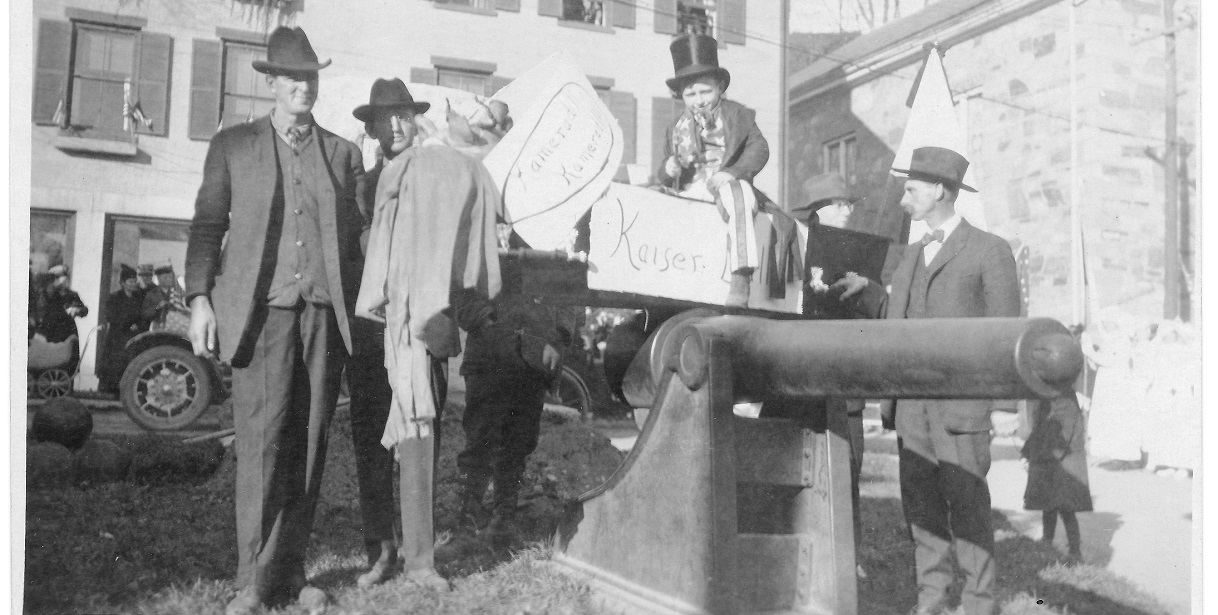 Author's Own Collection - ‘Victory Nov–11–1918’ at Springfield, Vermont, USA. A boy dressed as Uncle Sam sits in mockery on a coffin for Kaiser Bill.

When the fighting on the Western Front ended on November 11, 1918, and people celebrated wildly back at home, unusual outfits featured prominently in those celebrations. Flags became clothing, and there was plenty of improvised fancy dress. Adults and children dressed as the Kaiser, for instance, or students dressed as the clergy; some people even wore black minstrel faces. Children wore soldiers’ uniforms. Cheltenham Ladies College held a huge fancy dress ball that evening—one girl went as Carmen, one went as a Demon, and another as a Dutch boy (“the costumes were all gorgeous”). It was noted that around the world there were women dressed as men—in Britain, in Birmingham for instance, there were “a number of women masquerading in male attire.” In New York, soldiers and sailors put on women’s clothing— “It was not uncommon to see a stalwart hero in navy blue blushing beneath a flapping picture hat.” The lack of hats among English crowds was also noted, as were women with their hair down, because usual standards of proper dress were cast aside. The so-called “Armistice blouse” was not a term in use that November—that name coming along in America later in the century as a way of evoking the 1918 style, but clothes were a memorable characteristic of November 11, 1918. And, in the years since, they have always been an important part of Armistice Day and Remembrance Sunday, although not quite in the way they were in 1918.

Soon after November 11, 1918, a grand, fancy-dress Victory Ball was held at the Albert Hall on November 27. There, the Armistice was celebrated with some remarkable and imaginative costumes. Among “the infinite variety of fancy and poudre costumes” which “afforded a gorgeous and ever-changing feast of color,” there were women dressed up as the victorious nations, including Lady Diana Manners as Britannia, Mrs. Lionel Harris in her “America” costume based on the Statue of Liberty, and Mrs. Ferdinand Stanley as Canada with a wreath of wheat on her head. It was followed by other Armistice balls, most of them similarly inclined towards glamorous dressing-up. Not everyone, though, thought that was an appropriate way to mark the end of that horrific war. With the arrival of the two-minute silence, and formal Armistice Day services and ceremonies, November 11 became a less colourful affair. The black of mourning, or other sombre, dark colours, became the standard way to dress, and often the red poppy was the only speck of vibrant colour. The mood shifted from celebration to remembrance.  There had been many people wearing black in the crowds in 1918, but that colour was combined with the red, white, and blue of victorious nations.

On November 11 this year, I was in the heart of London at the Cenotaph on Whitehall as a part of the BBC’s television coverage of the Remembrance ceremony and march pasts. I had the privilege of not only talking about the 1918 Armistice, but also experiencing the centennial commemoration from up close. While the cream stone buildings dazzled in the sunshine, the dominant color among the crowd was black. The colors of the day were striking: the event was blessed with fine weather (even though it was not warm by any means), so all the dark-clad people stood beneath blue skies, and in the sunlight the rows of medals were glinting. The red wreaths of poppies at the foot of the Cenotaph were a small field of color.

The Queen didn’t lay a wreath this year but watched from a balcony. The press would take their usual interest in what Meghan Markle and Kate Middleton wore (“Kate wore a fitted black coat in a military style”), and there was discussion of why Meghan wore one poppy but Kate wore three; but from down below, the dark figures on the balconies on Whitehall just looked like sooty little London pigeons hunched up and motionless in the cold. In the trees on Whitehall, green parakeets were chattering away, and although these exotic parakeets are such a familiar and much-loved feature of London these days, their colorfulness and cheeriness did seem a little out of place.

One little detail of the day, which received a lot of attention in the press, was the coat worn by the Leader of the Opposition, the leader of the Labour Party, Jeremy Corbyn. His coat, which had a hood and looked like a cheap raincoat, was considered by some to be too informal for the occasion, and a smart black overcoat would have been a more conventional choice. This was interpreted as a rerun of the Michael Foot incident: on Sunday November 8, 1981, Michael Foot, the Labour leader, appeared at the ceremony wearing a green coat that was described as a “donkey jacket”, along with a busy tie, ill-fitting trousers, and brown loafers. The press had a field day. The Daily Mail let readers “Dress Your Own Michael Foot” with a cutout wardrobe for him.

On November 11, 1918 there was, of course, no requirement to be smartly dressed—far from it. The first Armistice Day had been a day of wonderful and absurd outfits. At the fancy-dress victory balls there were probably people dressed not in donkey jackets but as donkeys: according to one novelist, Wilfrid Ewart, there was every costume at the “Grand Victory Ball,” including “court jesters dancing with Bacchantes, Chinamen waltzing with shepherdesses, the Comic Ass with the Elephant and the Kangaroo.” And there was a real donkey on Whitehall on November 11, 1918, near where the Cenotaph now stands. That poor donkey was dressed up too: “a donkey-cart driven by a woman was seized in Whitehall and the donkey decorated with flags.” Many animals were dressed up, sometimes rather against their will, on that unique, strange, colorful day.

Guy Cuthbertson is Associate Professor of English Literature at Liverpool Hope University, and he was the British Academy’s Chatterton Lecturer on Poetry in 2018.  He has edited two volumes of Edward Thomas’s prose and is the author of Wilfred Owen (Yale, 2014). 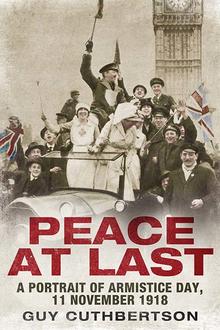