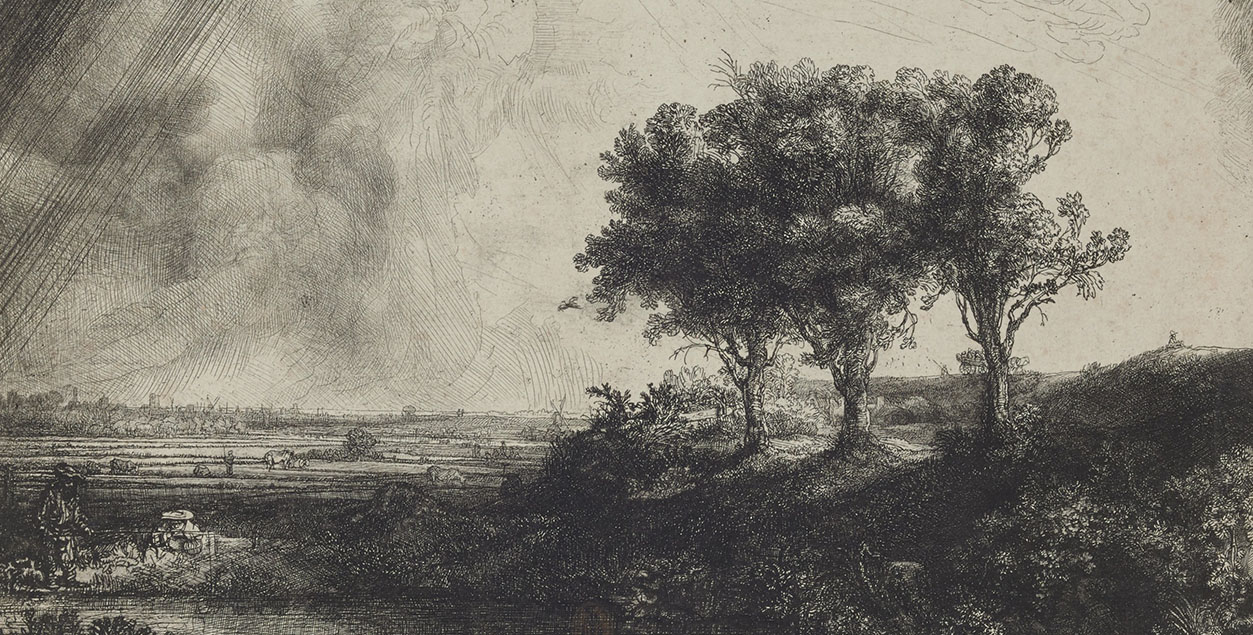 Rembrandt van Rijn was the Alfred Hitchcock of the Golden Age of Dutch painters.  Like the British director—who made cameo appearances in many of his films—Rembrandt placed himself in his compositions: as a mendicant, as a helper who holds the arm of Christ in the Descent from the Cross, and as a Renaissance courtier, to cite but three examples. He portrayed himself in early prints during his formative years in the city of Leiden, not far from Amsterdam, when he initialed his works “RvL” (Rembrandt van Leiden). As an autodidact, he first produced prints of his family members, then the citizens of Leiden and later of Amsterdam. He turned to genre works, presenting residents of the Dutch countryside, such as an itinerant merchant selling rat poison to a client leaning out of a Dutch door. Not only is the purveyor ready to demonstrate the effectiveness of his goods, he also sells furs, and may have been an occasional dentist, suggested by the young fellow with padding on both of his cheeks, a sign that his wisdom teeth had recently been pulled. Imagine combining dentistry and extermination. Startling is an understatement for such an image.

By casting himself in his works, Rembrandt discovered a way to envision the choreography of many of his compositions. Are Rembrandt and his wife Saskia models for his version of Adam and Eve, drawn along the lines of two prior examples by Albrecht Dürer? Rembrandt gooses up the drama by displaying the moment of Adam’s hesitation to receive the forbidden fruit that will cause their fall from innocence, an observation discussed brilliantly by Simon Schama in Rembrandt’s Eyes.  Rembrandt the dramaturge shows Adam at war with himself, as he seems ready to run at the same time he is drawn into accepting the fruit. Endowing his figures with such expressive interiority is what distinguishes Rembrandt from his contemporaries. 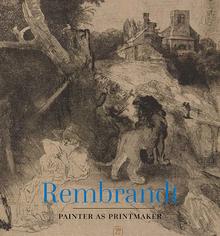 Is Rembrandt the artist sketching atop the hill in the Three Trees, or does he really imagine himself hidden below in the thicket being serviced by a seated woman in profile? No other print has been more effective in getting viewers to look slowly and closely at Rembrandt’s prints, as I learned in the course of giving about 30 group tours through the exhibition Rembrandt: Painter as Printmaker at the Denver Art Museum for which this book was written.  Since the exhibition closes on January 6, 2019, it might be the first to participate in the year-long celebration of the sesquarcentennial anniversary of his death—just five years, for example, after New Jersey was founded 350 years ago!

While many people know Rembrandt as a painter of stunning corporate portraits such as The Night Watch (1642), spellbinding dramas such as The Blinding of Samson (1636), and his many searching self-portraits, the majority may be unaware that he was also a brilliant printmaker of original impressions. He considered his prints as works of art in their own right, not simply reproductive images after his paintings, as was common practice among artists at the time.

Rembrandt worked on at least 314 copper plates with etching, drypoint, and sometimes additional touches of engraving.  He labored mightily to harmonize these various techniques, and during the throes of his tumultuous life during the late 1640s and early 1650s, he produced his most complex and well-known prints, including The 100 Guilder Print (c. 1648), The Three Crosses (1652), and Christ Presented to the People (1655), the latter two, astonishingly, entirely in drypoint.  He printed his works on at least nine different types of paper, including oriental papers made from vegetable fibers, as well as sheets called oatmeal or cartridge paper, because it was used to package the pellets fired out of muskets. He also printed impressions with a variety of colored inks. On occasion, he would add black chalk to impressions from his early states, and on other occasions—much in advance of Degas—would produce counterproofs, which are prints made from freshly inked impressions just pulled from the press.

Although widely sought after by print collectors throughout Europe, Rembrandt’s prints did not receive the same critical attention as his paintings.  He trained many students in painting, but not in printmaking, perhaps because the Zen-like approach to working the plates gave him solace from the noise and drama of his life.

It will be a sad day when this exhibition ends, but not entirely so, as the accompanying book captures the challenges that Rembrandt overcame to produce prints that ask us to look slowly and closely 350 years later.