Why write a history of Siberia?

ONE REASON is to address popular preconceptions about Siberia. The first of these is the belief that Siberia is all ice and snow and that the temperature never rises above freezing. There is indeed a lot of ice and snow in the winter, and the village of Oimiako (in the far north-east) has the honour of being officially the coldest permanently inhabited settlement on earth, with an officially recorded temperature of minus 71 degrees Celsius. The harsh climate has undoubtedly had a significant impact on Siberian development: on patterns of settlement; on population density; on lifestyle; on agriculture and other occupations; on communications. Summers can be hot in southern Siberia, however, and the plains are fertile. Peasants migrated voluntarily to Siberia from European Russia and Ukraine from the seventeenth to the twentieth century to improve their quality of life by acquiring larger and more productive farms. Siberian peasants were thought to live better than their counterparts in European Russia. Indeed, it was the perceived wealth of Siberian peasants that led them to be particularly targeted as kulaks in the 1930s.

A second popular perception is that Siberia is inhabited by bears, wolves and tigers. That is true, although I have only seen stuffed animals in museums in Siberian cities, and there are more concerns nowadays – both in Siberia and in Western countries – about the sharp decline in the number of Siberian tigers than about their threat to humans and to livestock. It was in fact the enormous wealth that could be acquired by the sale of pelts, and in particular sable and fox fur, that attracted hunters and Cossacks to Siberia in the first place, and persuaded Tsar Ivan IV to claim ownership of these lands. That is a crucial part of the Siberian story.

A third perception, based very much on reality, is that Siberia is a vast empty land. Siberia is certainly vast: it comprises 77 per cent of the Russian state’s territory and encompasses eight time zones. I have defined Siberia in this book in the broadest sense, including all the lands stretching from the Ural mountains to the Pacific Ocean. The size of Siberia and its low population density posed particular challenges in establishing communications and in governing over vast distances, and gave rise to concerns about security on the southern borders. There has always been a problem about the inaccessibility of Siberia’s natural resources – from gold mines in the eighteenth century to the oil and gas reserves today – and that has been only partly relieved by the coming of railways and aeroplanes. Settlers were always, however, lured to Siberia. The population grew from some 270,000 indigenous people and settlers at the end of the seventeenth century to over a million by 1795 and over 2 million by 1830. The migration to Siberia in the late nineteenth and early twentieth centuries, when about 3 million peasants crossed the Urals, paralleled the mass migration from Europe to the United States in the same period. The population reached over 10 million by 1914. Further mass migration to new industrial bases and cities in the Soviet period saw the population double to over 20 million by the 1960s. Today the population of Siberia is some 30 million people.

A further perception of Siberia is that it is a place of terror and exile, where Dostoevsky and other political figures were tormented and millions perished in the Gulag system. This was true from the very beginning of the Russian penetration of Siberia, and I discuss the exile system in the tsarist period and the Gulags in the twentieth century. The tsarist exile system helped to shape the distinctiveness of the social composition of Siberia, not least because almost all the exiles remained in the area. Millions of prisoners passed through Siberia to the Soviet prison camps, and some of those who survived remained in Siberian cities after their release. But not all Russian and Soviet prisons were, or are, in Siberia. When the Pussy Rioters were sent to prison in 2012 the headlines in some sections of the British press were ‘Pussy Rioters Sent to Siberia’, although in fact they were all sent to prisons in European Russia. Furthermore, some of the exiles in the tsarist period made a significant contribution to the cultural and economic development of Siberia.

I do not, however, want simply to address popular preconceptions; rather, I wish to offer a rather different type of history from the ones currently available. When I was writing my last book on the impact of war on state and society in Russia (Russia 1762–1825: Military Power, the State and the People, 2008), I looked at garrison records in the Military Historical Archive and in the Archive of Ancient Acts, both in Moscow. The richest records I found were those of the garrison in Gizhiga, a desolate spot in the far north-east of Siberia on the northern shores of the Sea of Okhotsk. I looked at the establishment and development of the garrison in the mid-eighteenth century, the numbers of soldiers who were posted there, the cost of maintaining the garrison, and the difficulties of communication between the garrison and the military and civil administration in eastern Siberia. As a result, I was able to see the more human side of the garrison – how the soldiers lived and what happened, for instance, when the fishing suddenly deteriorated. I was also able to acquire some sense of the relations between the soldiers and the local population. There was often violent conflict but at the same time the garrison could intervene when there were disputes between local tribes. Moreover, soldiers hired local people to work for them and, not surprisingly, formed relationships with local women.

From Siberia by Janet M. Hartley. Published by Yale University Press in 2014. Reproduced with permission.

Janet M. Hartley is professor of international history at the London School of Economics and Political Science. 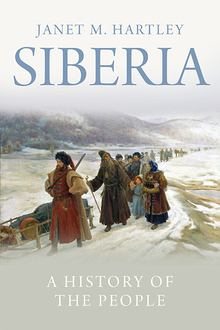