“Where does the mind stop and the rest of the world begin?” asked the philosophers Andy Clark and David Chalmers in 1998, considering the case of Otto, a patient suffering from Alzheimer’s disease. Otto always carried with him a simple spiral notebook as a memory aid, in which he recorded his thoughts and experiences. To retrieve his memories, he paged through his notes. Clark and Chalmers describe the notebook as an extension of Otto’s self—it serves as a storehouse of memories just as the mind and brain do for an unimpaired person. The philosophers then ventured the surprising suggestion that our minds normally function as this kind of “extended system.” This idea is at once ordinary but also quite radical: How can our minds, usually identified with the workings of our individual brains and enclosed within the skull, exist in some fashion beyond these bounds?

Today, we might readily grasp the notion of an “extended mind” given our increasing reliance on and fascination with our various devices, smart phones, and computers that function as our “memories” and our mental aids. But if our minds can extend into old-fashioned spiral notebooks as well as flashy electronic devices, might this call into question a narrow, contained notion of selfhood? What if we imagine ourselves according to a network model of “distributed human being” along these lines? What would it mean to see ourselves as intimately enmeshed in the world and with others?

Even absent these new technologies, it is possible to imagine one’s distributed, expansive nature. Once your child enters your life, isn’t your selfhood immediately and irrevocably distributed? How is it that feeling your child’s pain can sometimes be more agonizing than feeling your own? How is it that we sometimes move in synchrony with a dancer on the stage or an athlete running down a field? Do we at times lean to one side in an effort to alter the course of the bowling ball spinning down the lane? Do we feel the heaviness when observing a painted or digital image of someone lifting a weighty object? How is it that we experience a mountain as if rising or a path as if stretching out before us? And why do we find ourselves in the stories we read, the films we watch, the dramas we view?

Over the past century, a host of social scientists, psychologists, medical practitioners, and art theorists have explored these extensions of the self—imagined, projected, or extended—into others and the world. These connections, bound by feeling, and often incorporating knowing and bodily awareness, have linked us to others as well as to natural and artistic objects. This connection or extension has most often been called “empathy,” even though the word first appeared only in 1908 as a translation of the German art historical term Einfühlung, or literally, “in-feeling.” Einfühlung captured the aesthetic activity of transferring one’s own feeling into the forms and shapes of objects. This was empathy’s earliest meaning, one that has been covered over and for the most part forgotten.

From the time of the coining of “empathy,” empathic practices have coursed through a stunning number of fields from aesthetic psychology to social work and psychotherapy, to politics, advertising, and the media. These practices, diverse as they are, make clear that extending the mind and feeling, as well as the self and bodily movements to others and objects, has been imagined to be possible for a long time. The history of empathy shows us that in scientific, therapeutic, political, and everyday settings, empathy has been credited with the power to shift the shape of the self so as to enter into alien forms, to transform into art objects, to inhabit other realities, and to take on the experiences of other persons. To look back at empathy in all its varieties is to witness, directly and obliquely, the diffusion of the self across its feeling connections.

As many understand it today, empathy is our capacity to grasp and understand the mental and emotional lives of others. It is variably deemed a trained skill, a talent, or an inborn ability and accorded a psychological and moral nature. Among its many definitions are: emotional resonance or contagion, motor mimicry, a complex cognitive and imaginative capacity, perspective taking, kinesthetic modeling, a firing of mirror neurons, concern for others, and sometimes, although rarely, aesthetic self-projection, its earliest meaning. But even this list does not exhaust its possible definitions!

This abundance of meanings does not hamper the fact that we readily call upon empathy in everyday exchanges. It figures in political discourse, in anti-bullying curricula in schools, in psychotherapy, in business, and in personal relationships. Declarations have been made that we live in the age of empathy, or in an empathic civilization, as book titles attest. Cultural critic Jeremy Rifkin professed in 2009 that empathy is a social value that will remake our businesses, our neighborhoods, even our biosphere. Drawing on Daniel Goleman’s work on emotional intelligence, Rifkin tells us that an “empathic sensibility lies at the heart of the new management style.” It is more important to have a caring boss and emotionally satisfying office exchanges than material gain. Rifkin claimed that this “new empathic spirit” is evidenced by required community service for high school students, efforts to expose children to people of diverse backgrounds, and a new theatrical sense of the self, evident in social media. Goleman has long argued that a capacity for empathy is key to successful leadership, and in a 2017 Harvard Business Review publication he once again highlights the importance of empathy.

Other cultural critics are less sanguine that we are entering a new era of global empathy. A study of American college students from 1979 to 2010 documented a sharp drop-off in self-reported empathy scores on measures of empathic concern and perspective taking. Some attribute this decline to the fact that Americans spend more time alone, that they read fiction less often, and that neoliberal capitalism has significantly eroded our natural tendencies toward empathy. “Where is the empathy?” Nicholas Kristof asked in a New York Times op-ed piece, describing the tendency to blame rather than understand those who fall on hard times, telling the story of his friend who lost his job, went on disability, and died poor at the age of fifty-four.

From Empathy by Susan Lanzoni. Published by Yale University Press in 2018. Reproduced with permission.

Susan Lanzoni is a historian of psychology, psychiatry, and neuroscience and teaches at Harvard’s School of Continuing Education. Her work has been featured in the Atlantic and American Scientist and on Cognoscenti on WBUR, Boston’s NPR station. She lives in Cambridge, MA. 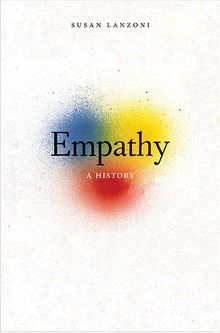