Walk into an open field on a clear, moonless night. Overhead, sparkling stars are sprinkled across the sky. All of them seem equidistant from you—and no one else—and you are lulled into imagining yourself at the center of the universe.

For nearly five hundred years, astronomers have struggled to break that illusion. Our petty standing in the cosmos is a scientific fact, if not a visceral experience. Earth zips at nearly 67,000 miles (108,000 kilometers) an hour around the Sun, which in turn completes one lap around the Milky Way every 220 million years, meaning that the last time we were in this neck of the galaxy, dinosaurs were getting ready to rule the planet. Still, as you look skyward in that pitch-black field, Earth seems to be at the heart of all creation.

We should blame Aristotle for initiating that perspective. So authoritative was his pronouncement of an Earth-centered universe in the fourth century BC that few challenged the idea for nearly two millennia. But over time, the urge to better explain the universe’s behavior gave rise to new concepts of Earth’s celestial position. In 1543, Nicolaus Copernicus reintroduced a hypothesis first posited by the ancient Greek Aristarchus of Samos some eighteen centuries earlier. His model boldly placed the Sun at the center of the universe, shoving the Earth into motion. The radiant Sun was at last in its proper perch, “as if resting on a kingly throne,” wrote Copernicus.

Copernicus was not disturbed at all by a moving Earth, frightening as that might seem at first. More disturbing to him was the rotating sky in an Earth-centered universe. The farther out one moves from a stationary Earth, the faster and faster the sky must move to stay in place. But the Polish mathematician and astronomer knew quite well the consequences of challenging conventional notions. In the preface to his great work De revolutionibus orbium coelestium (On the revolutions of the heavenly spheres), he predicted that “as soon as certain people learn that in these books of mine . . . I attribute certain motions to the terrestrial globe, they will immediately shout to have me and my opinion hooted off the stage.”

That misfortunate fate fell upon Galileo, who starting in 1609 gathered the crucial evidence supporting Copernicus’s heliocentric vision. In 1633 he was brought before the Inquisition and eventually put under house arrest for daring to oppose an Earth relaxing at the universe’s center.

By the time of Newton decades later, though, such hostility had finally faded. For one, Sir Isaac’s physics could at last explain why we aren’t thrown off the planet as the Earth rotates and orbits the Sun. Yet even though Copernicus moved Earth from the hub of the solar system, its inhabitants remained confident that they retained a privileged place at the center of the Milky Way, then thought of as the sole galaxy. Homo sapiens is an egotistical species; we resist being kicked out of a prime spot in the cosmic scheme of things.

That confidence, though, withered as astronomy underwent a spectacular transformation starting in the nineteenth century, an era teeming with technological innovation. Prominent industrialists, enriched by the Gilded Age, provided the money that allowed dreamers to construct the powerful telescopes they had long desired.

With one of those new instruments atop California’s Mount Wilson, Harlow Shapley resized the Milky Way. He discovered in 1918 that it was ten times larger than previously thought, and along the way, he relocated the Sun and its planets into the galaxy’s suburbs. The Sun resides roughly 30,000 light-years from the galactic center, more than halfway to the Milky Way’s edge. “The solar system is off center, and consequently, man is too,” Shapley liked to say.

But Shapley did not take the next step; he, too, fell victim to cosmic pride. Despite the growing circumstantial evidence that the Milky Way was not alone in the universe, he held fast to his beloved “Big Galaxy” model. In this scheme our galaxy remained at center stage, meaning we lived in a solitary, star-filled oasis suspended in a darkness of unknown depth.

Shapley’s vision was demolished in 1924, when Edwin Hubble at last proved that the cosmos is populated with myriad galaxies as far as the telescopic eye can see. The Milky Way suddenly became a bit player in a much larger drama.

As you can see, the history of astronomy is a continuing extension of the Copernican principle, moving us farther and farther from a front-row seat. It’s a principle of irrelevance that involves not only our position in space and time but also the contents of the universe. In recent decades, astronomers have learned that a hidden ocean of cosmic matter—comprising about 85 percent of the universe’s mass—surrounds us, possibly elementary particles yet to be discovered. The stuff of stars, planets, and us is but the flotsam in this enveloping sea.

More startling—and taking the Copernican principle of displacement to its ultimate end—our universe may not be the only cosmos. As physicists attempt to construct a theory that unifies all the forces of nature, one theme repeatedly arises: that additional cosmic realms may be lurking in other dimensions. We could be part of the multiverse; the Big Bang might have occurred when universes outside our dimensional borders bumped into one another.

The main response to this astounding theory has been to bury our heads in terra firma. Yet such a wider perspective can eventually offer soothing succor, allowing our earthly concerns to shed away slowly, until they dissipate completely. Hubble knew this. During a visit to the astronomer’s home, the English poet Edith Sitwell was shown slides depicting the many galaxies that cannot be seen with the naked eye. “How terrifying!” she exclaimed. To which Hubble replied: “Only at first—when you are not used to them. Afterwards, they give one comfort. For then you know that there is nothing to worry about—nothing at all.”

Marcia Bartusiak is professor of the practice, graduate program in science writing, Massachusetts Institute of Technology, and the award-winning author of six previous books, including most recently Black Hole: How an Idea Abandoned by Newtonians, Hated by Einstein, and Gambled on by Hawking Became Loved. 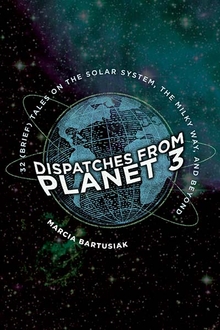