The earliest Zen teachers talked about meditation in terms of peace of mind, a state free of the anxieties and irritations which afflict us all. They taught that this peace is not to be obtained through our usual preference of surrounding ourselves with what we like and banishing what we dislike. Instead, it is to be found by getting to grips with the nature of our own minds.

This insight is at the heart of Zen. The Buddha’s teachings are based on the principle that we want to be free from suffering, but are going about it in the wrong way. Thus the Buddha’s four noble truths begin with suffering, though ‘suffering’ is really too narrow a translation for the word he used, duḥka. The dictionary translation of duḥka is wider, encompassing ‘uneasiness, pain, sorrow, trouble, difficulty’. Some translators prefer ‘unsatisfactoriness’.

In any case, while most of us are not always suffering, if we stop and look within, there are few times that we can say we are free from a feeling of unease, or the sense of something missing, expressed by that awkward word ‘unsatisfactoriness’. Ultimately, we can’t escape suffering itself, because we cling to the things we want and need even though it is the nature of the universe to change, so at some point we have to lose them.

To have peace of mind, then, is to be free from suffering, to be able to face whatever happens with equanimity. Achieving peace of mind will not come about through trying to satisfy our attachment to ease and pleasure and aversion to discomfort and suffering. It is not the successful accomplishment of one pole of that neurotic dichotomy, but the peace that comes of letting go of all attachment and aversion. And that only comes from dissolving our attachment to ‘I’ and ‘mine’.

The Buddha taught that everything is impermanent, in a process of constant change; yet we look for a sense of permanence in our idea of ourselves, our possessions, our friends. Because we invest in this solidity, we suffer when things change. In Zen this is sometimes taught through the metaphor of water freezing into ice. We attempt to ‘freeze’ the flow of the world into categories that make sense to us. This creates the illusion of the unchanging self that we feel ourselves to be, and the solid, essentialized phenomena that we feel we must control, whether grasping and keeping them or pushing them away.

This is not just about our experiences of ourselves. This ‘freezing’ is also a solidification of our relationships – categorizing the fluid and subtle back-and-forth of our relationships into this ‘self’, that ‘other person’ and the things that we do to them, and they do to us. This blocks the intuitive, compassionate activity of which we are capable, and it reduces our personal interactions to an emotional calculus of help and hurt.

This state of affairs – a frozen world – is what Buddhists call samsara. It is not a place, but the sum of all the ways of perceiving, reacting, thinking and behaving that bind us into patterns of suffering. Recognizing these patterns and working on them is the path; finally putting an end to them is enlightenment, or awakening. Anyone who has achieved this is an awakened one, a buddha.

The nature of mind

The path to awakening takes a variety of different forms in the many traditions of Buddhism. In Zen, the path from samsara to enlightenment is not a journey from A to B, but a gradual realization of something that has always been there in our day-to-day awareness. We have everything we need for awakening right here in our own minds, so there is no need to rely on gods or other supernatural aids. Even the Buddha cannot help us if we think of ‘buddha’ as something separate from what we are, for there is no buddha apart from the mind. To put it another way, ‘the nature of mind has always been pure from the beginning’.

To say our mind is pure from the beginning is only to say that the way we normally engage with the world is not fundamentally what we are. The ingredients of our anxieties and irritations – clinging to our own selfish needs, categorizing other people and things according to our own desires and fears – are part of a repeating pattern, but they are only one particular expression of our awareness, which is fundamentally pure. This awareness simply is – always present but obscured by our own confusion.

This pure awareness is there for everyone, but is like a pearl hidden by dirty water; only when the water is allowed to settle can we see the pearl. It is the practice of meditation, which is key to all Zen traditions, that allows the dirt to settle and the waters to become clear. Thus meditation is not primarily an intellectual activity, or an attempt to transform one’s mind into something else. It is a way to let the mind be, so that the dirt stirred up by our own turbulent thoughts and emotions gradually settles.

This is why Zen teachers have often warned against becoming entangled in ideas of what the mind, the world or enlightenment really is. Many Zen stories express the idea that the mind, and indeed ‘peace of mind’, is not what we might think. A famous example is this dialogue between two of the founding figures of Zen, Bodhidharma and his student Huike:

Huike said to Bodhidharma: ‘My mind is anxious, please pacify it.’ To which Bodhidharma replied, ‘Bring me your mind, and I will pacify it.’ Huike said, ‘Although I’ve sought it, I cannot find it.’ Bodhidharma then said, ‘There, I have already pacified your mind.’

This, like many Zen dialogues, points to the futility of seeking solutions to our problems within our usual frameworks. Intellectual analysis, though it has a crucial role in Buddhism, is often downplayed, and Zen teachers warn against too much concern with books and book learning. These statements must be taken with a pinch of salt, for the Zen tradition itself has made a huge contribution to the literature of East Asia. What the stories are getting at is that becoming fascinated by the literature, or by intellectual speculation, is to take a path away from awakening.

From The Spirit of Zen by Sam van Schaik. Published by Yale University Press in 2018. Reproduced with permission.

Sam van Schaik is a specialist in the history of Buddhism in Tibet and on the Silk Road at the British Library in London where he is research manager of the International Dunhuang Project. 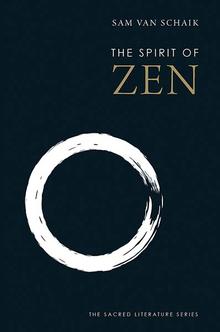