Party leaders in Congress matter. They shape the agenda and the rules of their chamber, control lawmakers’ access to internal information, and assemble and enforce collective agreements within the legislature. They negotiate on behalf of their colleagues with interest groups and elected officials outside of Congress, and they serve as their party’s public face to other branches of government, the press, and the public. They also participate in electoral politics, developing partisan messages, raising campaign funds, and recruiting electoral candidates.

Deciding who will serve as a party leader can therefore have both immediate and enduring consequences for congressional politics and American public policy. Yet despite its importance, leadership selection in the U.S. Congress is a topic few have studied in depth. Though there is a substantial body of research on what congressional party leaders do, why they do it, their influence, and how their powers have changed over time, no comprehensive study of the selection of those leaders has been written in the past four decades, apart from occasional analyses of individual races or trends in the relative divisiveness of elections over time.

Party Leadership Positions in the U.S. House of Representatives

Both parties in the House of Representatives have a number of elected leadership positions. The Speaker of the House is the highest office in the chamber: the sole House leadership post mentioned in the Constitution and, since 1947, in the line of presidential succession just after the vice president. The Speaker’s responsibilities include representing the chamber as a whole, presiding over sessions (or selecting a designee to do so), helping set the majority party’s agenda and protect its majority status, appointing lawmakers to certain committees, and serving as the party’s top spokesperson. It is the only elected leadership position for which candidates are first nominated by each party and then selected by the entire chamber, typically on the first day of a new Congress.

Each party also has a floor leader. The majority leader, second in party rank to the Speaker, is responsible for setting the legislative agenda, scheduling and monitoring floor deliberations, and helping lobby for votes, while the minority leader is his or her party’s highest ranking officer and has responsibilities that include serving as party spokesperson, providing leadership on the chamber floor, and appointing fellow partisans to particular committees. Majority and minority floor leaders have been selected within each party caucus since the early twentieth century (Nelson 1977). Another set of leaders are the majority whip and minority whip, each chiefly responsible for building support for (or against) bills and amendments on behalf of their party and facilitating communication on legislation between rank-and-file lawmakers and other leaders. The Democratic whip was appointed by the majority leader (in consultation with the Speaker) until 1986, when it became an elected office, while Republicans have elected their whip since the 1960s (Nelson 1977; Ripley 1967). (When in the minority, both parties tend to refer to their leader and whip positions as “Democratic” or “Republican,” rather than the less-appealing “minority.”)

There are additional leadership posts, also elected by secret ballot within each party, which we refer to occasionally in this study. They include various officers affiliated with each party organization, such as the chairs of the Democratic Caucus and Republican Conference, the Democratic Caucus vice chair (formerly secretary), and the Republican Conference vice chair and secretary. Also included are the chair of the GOP’s campaign arm, the National Republican Campaign Committee (NRCC); the Republican Policy Committee, a party advisory group; and, prior to its elimination in 1995, another GOP advisory body, the Republican Research (or Planning and Research) Committee.

For now it is worth noting two consequences of their shared features. First, their relatively large number—not to mention the scores of unelected leadership offices that also exist, such as the two parties’ assistant, deputy, and regional whips—underscores the significant and expansive responsibilities of party leadership in the modern Congress, especially during the present-day period of heightened party polarization and reduced influence of legislative committees. Second, while they vary in duties and tasks, ambitious members of Congress see them collectively as useful vehicles for influencing policy and expanding their district, state, and even national visibility. Legislators may occasionally seek a specific leadership post for its own sake, but more often they pursue one position in the belief that, if they prove successful in that office, they will be well positioned to run for a higher-ranked leadership office later. The idea of a hierarchy or ladder of leadership positions is an important one, and although the ranking of positions on the ladder is often imprecise and subject to change over time, it means that the decision of whom to support for a particular leadership office often depends less on a candidate’s qualifications for that office—as important as they might be to some lawmakers in individual instances—than on whether the candidate is generally well suited to serve in leadership.

From Choosing the Leader by Matthew N. Green and Douglas B. Harris. Published by Yale University Press in 2019. Reproduced with permission.

Matthew N. Green is professor of politics at the Catholic University of America in Washington, DC.

Douglas B. Harris is professor of political science at Loyola University Maryland. Both have written numerous books and articles on American politics. 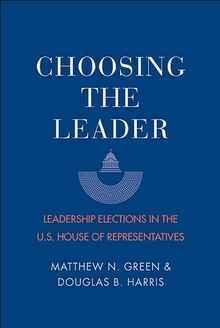