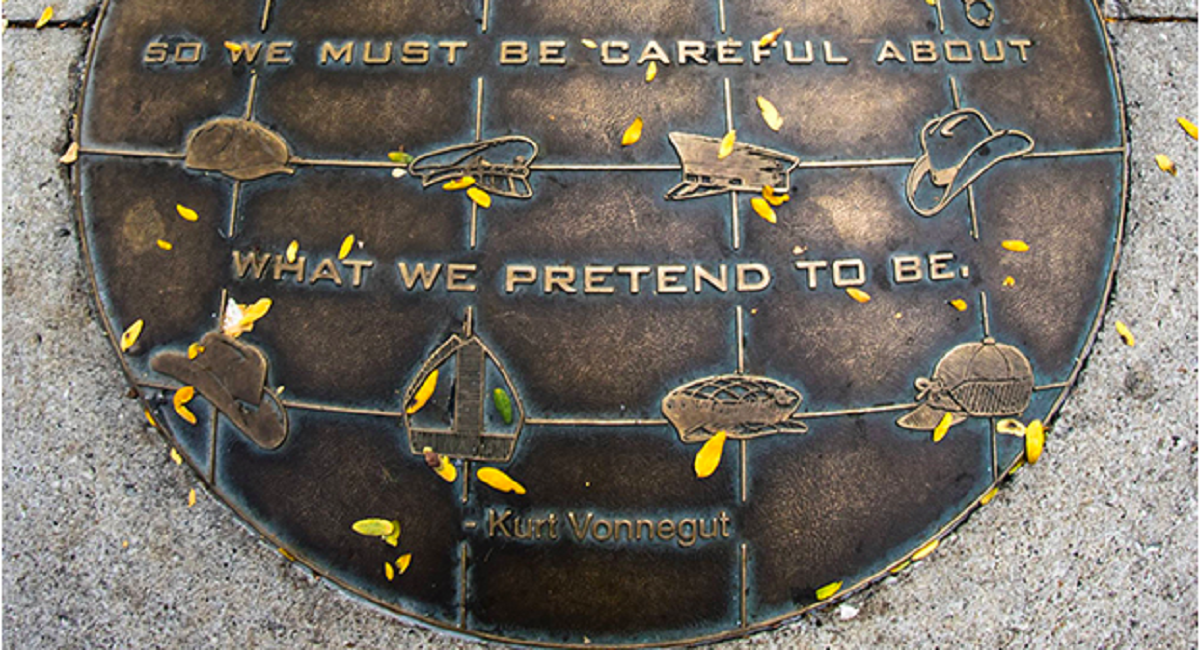 In mid-1960s suburban Cape Cod, Kurt Vonnegut—whose ink sketches and signed monographs now command up to $5,000 each—was unknown and his books were out of print. “I was rescued by Paul Engle’s Writers’ Workshop in the mid 1960s,” Vonnegut recalled, “and he didn’t know me, and I don’t think he had ever heard of me. He didn’t read that kind of crap.” As an eleventh-hour replacement for Robert Lowell, who “decided not to appear” for his visiting teaching position arranged for the fall of 1965, Vonnegut leaped at the opportunity. “I needed the money. I needed the stimulation. I needed the change in scene,” especially from an environment devoid of literary life. “My neighbors on Cape Cod didn’t read me, didn’t read anything, so I had felt like a pointless citizen there,” he said. The Workshop held promise to transform the forgotten paperback writer into a famous literary author.

In scrambling for a replacement for Lowell, one of Engle’s trusted advisers confirmed that “I was indeed a writer, but dead broke with a lot of kids,” Vonnegut recalled. The unlikely leap from freelance popular fiction writing—that left him “completely out of print and scared to death”—to the world-renowned Workshop presented Vonnegut with precisely the opportunity to win the serious recognition he had longed for as well as the financial stability he desperately needed.

Suddenly surrounded by elite authors, Vonnegut embarked on a self-conscious effort to reinvent himself. With most of his training in science, “he had not read many of the great novels his colleagues had been fond of discussing,” Thomas Marvin notes. This meant “for the first time in his life, he was expected to talk about writing, which forced him to think more deeply about his creative process.” He reached for anything he could find, including golf metaphors, to try to explain the proper form and rhythms of creative writing. His arrival drew whispers that he was a lowly purveyor of popular genre fiction, “a science-fiction hack” as one Workshop student alleged. That particular slur would have gone unchallenged had it not been for Vonnegut’s star student, John Irving, who rushed to his defense, precipitating a barroom brawl—a classic dramatic scene from 1960s Iowa City—over the aesthetic integrity of his beloved mentor.

When Vonnegut shared his magazine fiction with Norman Mailer, he knew instantly that the stigma of the pulp market would make it difficult to enter the ranks of intellectual culture. “You are right in saying that what I write is slick,” he replied to Mailer. While the periodical press accommodating science fiction withered, the paperback market exploded. Prior to joining the Workshop, Vonnegut realized an outline and a first chapter could earn him an advance of $3,000. He began to resemble the commercially aggressive “Paperback Writer” of the Beatles’ 1966 hit single: “If you really like it you can have the rights/ It could make a million for you overnight.” On swivel racks in drug stores, bus depots, and train stations sat Vonnegut’s first novels, The Sirens of Titan and Mother Night. “I was building a power base,” he later admitted, “with sleazo paperbacks.”

Although Cat’s Cradle earned a favorable critical reception after its release in 1963, his work remained virtually invisible. “I wasn’t even getting reviewed,” he recalled. “Esquire published a list of the American literary world back then and it guaranteed that every living author of the slightest merit was on there somewhere. I wasn’t on there . . . [and] it made me feel subhuman.” The Faustian deal—the sacrifice of prestige in exchange for the profit of trade genre fiction—left him penniless. Any literary recognition of the hardcover editions of Cat’s Cradle and God Bless You, Mr. Rosewater were rendered meaningless, as they too went out of print.

Vonnegut did not need literature to save him from kitsch culture of the sort that renders his character Kilgore Trout’s profoundest insights invisible. Instead he needed to import his science-fiction aesthetic—an inescapably popular genre—into a novel of ideas. He produced that novel of ideas, Slaughterhouse-Five, which many regard as his greatest novel, in Iowa City.

As the first true trade genre writer to join the faculty of the Iowa Writers’ Workshop, Vonnegut felt a sense of outsidership from his first introduction to Engle in 1965. Engle struck him as “a lean, gray-haired slightly crooked Supreme Court Justice dressed like Harry Belafonte,” a curious mix of political cunning and flamboyant show business. That year Engle had just been appointed to a six-year term on the National Council of the Arts, which included John Steinbeck, Ralph Ellison, and Sidney Poitier. Totally unfamiliar with science fiction, Engle certainly had no agenda to usher writers of popular genre fiction into the program. Yet Vonnegut benefitted from how, since WWII, newly “pulped” classics such as Brave New World and The Great Gatsby began bearing sensationalistic covers inspired by the true-crime genre. The book publishing industry’s exploding post-war paperback sales included original titles in “holocaust pulp” and “history pulp.” Had Slaughterhouse-Five continued this dubious tradition two decades later?

Rather than allow others to raise this question at his expense, Vonnegut chose to preempt it, particularly through the delicate ethics of creating entertainment media out of human loss and tragedy. “The raid didn’t end the war one day earlier, didn’t save one life, not of an American soldier, Russian soldier or concentration camp inmate,” he said. “Only one person benefitted from the bombing of Dresden,” he said with a long pause. “Me.” The darkness of the sentiment eclipses any potential humor in it. “I got three dollars for every man, woman, and child killed there.” In the context of the publishing industry and the larger capitalist pursuit of book sales, Vonnegut’s confession reflects both his sensitivity to the memory of the dead and aspiration to ascend from genre writer to literary author, whose royalties he could finally afford to lament.

David O. Dowling is associate professor at the University of Iowa’s School of Journalism and Mass Communication. His previous books include Literary Partnerships and the Marketplace and Emerson’s Protégés.