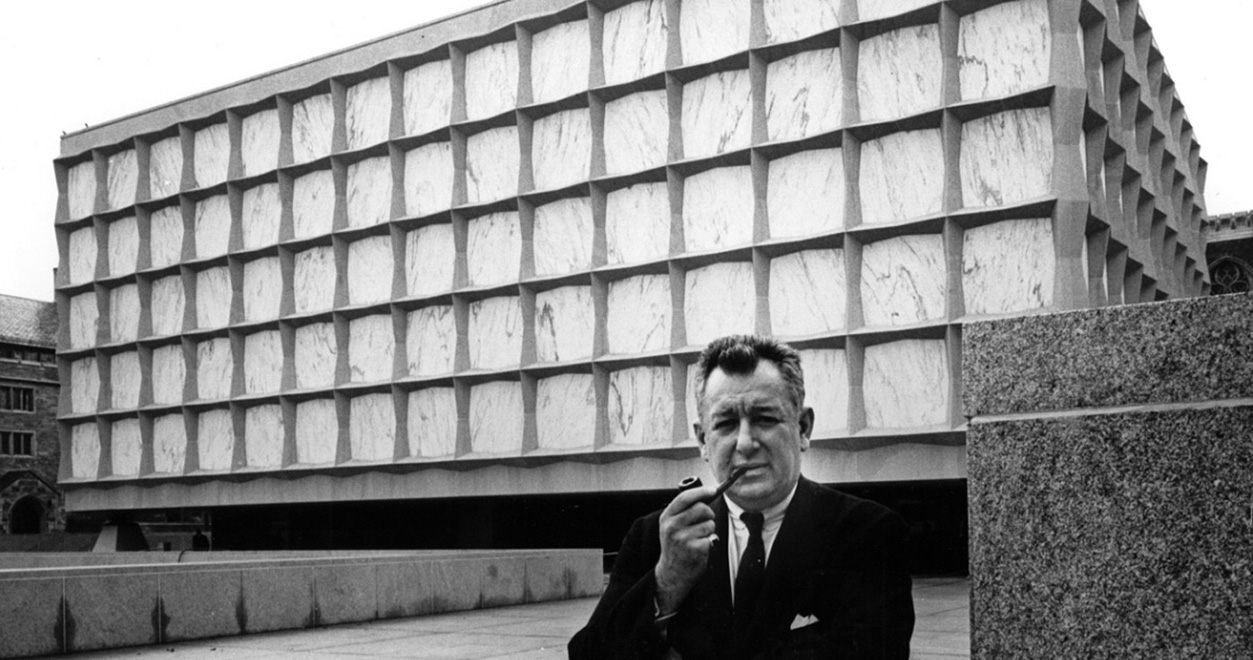 At times, writing about the architect Gordon Bunshaft (1909–1990), former chief designer for the firm of Skidmore, Owings & Merrill (SOM), was like writing about a sulky teenager.

Architects, of course, have lots of ways of talking. Philip Johnson was garrulous––people liked to say that he talked a great building. The German Mies van der Rohe was the opposite.  His words came out chiseled in stone––in the manner of his “less is more” architecture. Bunshaft was in another class altogether.  He left behind no sketches, gave no lectures, wrote no articles, and rarely submitted to journalists’ questions. His youthful travel diary is filled with exhortations to be silent and by the time he rose to prominence with the construction of Lever House in New York (1952) he had a way of sending enquirers on their way empty-handed. On being awarded the Pritzker prize in 1988 (which he shared with the Brazilian architect Oscar Niemeyer) he gave the shortest acceptance speech on record: 57 words.

Bunshaft’s silence was less like that of Quies, the Roman goddess of tranquility and stillness than that of Ira, the goddess of rage. In person, he was gruff, grumpy, crude, and stubborn. When pressed about his architecture, he offered staccato descriptive explanations. At dinner parties he would turn his back (and rotate his chair) so that he wouldn’t have to talk to an unappealing neighbor. “I suppose you do that postmodernist shit,” he reportedly told a young employee recently moved to SOM’s New York office from Washington, D.C. He joked that the only reason his name was not on the masthead at SOM was that the initials would be S.O.B.

So how do you write a book about a man whose explanations are boorish (at worst) or terse (at best) and who just wants his buildings to speak for themselves or, as he sometimes said, to “speak for me?”

First, I had to convince myself that this was an architecture worth explicating. That was no serious barrier. Bunshaft and SOM practically invented the mid-1950s form of corporate modernism: the glass and steel box. They built office towers and banks, corporate campuses, hotels, museums, and factories in the United States and around the world––and he (and they) received awards and hearty accolades. Today, some of these buildings are protected as historic landmarks.

Second, and significantly more challenging, I had to figure out what I would use for source material. Oral interviews with people who worked with Bunshaft were crucial and revelatory. I stumbled across an intimate portrait of SOM’s early years by William S. Brown (1910–1999), a fellow partner who worked with Bunshaft in SOM’s New York office for thirty years. Brown’s unpublished manuscript came up for sale on e-Bay and I snapped it up. (Actually, I purchased only a corrected rough draft and, through Brown’s extended family, was able to find a complete version––it’s now at the Avery Architectural and Fine Arts Library at Columbia University.)

Early on I decided to respect Bunshaft’s most fervent wish: that his buildings be allowed to speak for themselves. This may seem an obvious decision, but his steel and glass buildings seem manufactured and packaged rather than designed, so precise are they in their detailing that it seems as if they came down fully-formed from the sky. And Bunshaft’s later buildings in concrete seem so monumental, so alien as to be correspondingly (if differently) impersonal: The Lyndon Baines Johnson Library in Austin, Texas (1971), the Hirshhorn Museum in Washington, DC (1974), and 9 West 57th Street, New York (1974). But what if all his buildings were more personal than they initially appeared? What could they be saying?

Bunshaft’s reticence masked an insecure and competitive person. As an architecture student he roamed the drafting studio picking out the best of other students’ projects and combining them into his. In his early days at SOM, I learned, he had been brought into a project with three other (older) men and the four of them were told to fight it out to establish a hierarchy. Bunshaft won. At the office he often claimed credit when it was obviously something that should have been shared; he shifted himself into the limelight whenever possible.

Bunshaft also directed some of his aggression toward rivals outside of SOM, most particularly Mies van der Rohe, to whose works his were often compared (and found wanting). At the Pepsi Cola headquarters in New York (1961) he took Mies’s fascination with beinahe nichts (almost nothing) and reduced the façade to a glass skrim. At 140 Broadway (1967) he made a wholly black-glassed façade. You want “nothing,” try that! At Union Carbide in New York (1960) he made the vertical mullions project forward like silver fins. Mies had made mullions out of bronze that ran up the façade at the Seagram Building in 1958. These mullions deftly symbolized the internal structure but were, in reality, decorative. Bunshaft put aluminum facing on the mullions at Union Carbide and projected them out from the façade like sculpture. Like a series of taut metal sheets in a work by someone like Naum Gabo or Richard Lippold, they shift as we move around the building. Perhaps his most direct swipe at Mies came in the Beinecke Library at Yale University (1963). Bunshaft made the central book stack out of bronze: mullions that looked like those of Mies but which now are a truly an interior jewel case: that’s where bronze belongs, on the inside.

So were his buildings just the manifestation of an insecure and sulky architect?

I thought a lot about Bunshaft’s art collection and his interactions with two noted sculptors: Henry Moore (1898–1986) and Jean Dubuffett (1901–1985). His extensive correspondence with them, preserved at the Avery Library, is both playful and witty, describing cheerful conversations, and looking forward to further jovial meetings. In November 1972, he wrote tenderly to Dubuffet after the installation of his Group of Three Trees in front of Chase Manhattan in New York: “I enjoyed your visit here tremendously. I felt that although I have known you, off and on, for many years, this is the first time we really became closer.” This correspondence with his artist-friends makes it seem as if they were all speaking the same language and maybe, in a sense, they were. Was it silence that he shared with these artists? For Dubuffet, writing about art was inevitably cold: “Written language…seems to deliver only a dead remnant of thought, more or less as clinkers from the fire.” Moore, too, had misgivings: “For a sculptor or a painter to speak or write, in public, about his job, very often is a mistake. It (perhaps) releases (some of the) urge & tension needed to do his work with intensity.” The company of these artists justified Bunshaft’s own troubled silences.

In one of his rare interviews, in Newsweek magazine, he claimed that he, and no one else, was responsible for the firm’s designs. In a subsequent, teary meeting he begged forgiveness and was censured by his fellow partners. But the need for recognition was too strong: like his sculptor friends, he wanted the acclaim for himself. He carefully selected 38 buildings, out of the many hundreds he oversaw at SOM, to be his legacy. About this special group he spoke in his relatively uninformative style, and they formed the focus of the book about his work that he oversaw before his death. Bunshaft’s silences cover a tension between his artistic aspiration for personal glory and the pressures of the corporate firm, the collective, for which he worked. No building was more personal to him than the house he built on Long Island (1963). Bunshaft and his wife went there on weekends. He entertained clients and artist-friends there. It was on an exquisite site and housed his art collection. The house was decidedly his world––architecture, painting, sculpture, and landscape organized to his pleasure. And yet the design of the house was, for all intents and purposes, identical to two bank buildings he and SOM oversaw in Palestine, Texas (1965) and Carle Place, NY (1970). Artistic aspirations he could not express and a life in business came together––how to explain them? Perfecting the art of silence was his answer. Decoding these messages was a challenge and a pleasure.

Nicholas Adams is professor emeritus of architectural history at Vassar College and the author of Gordon Bunshaft and SOM: Building Corporate Modernism.