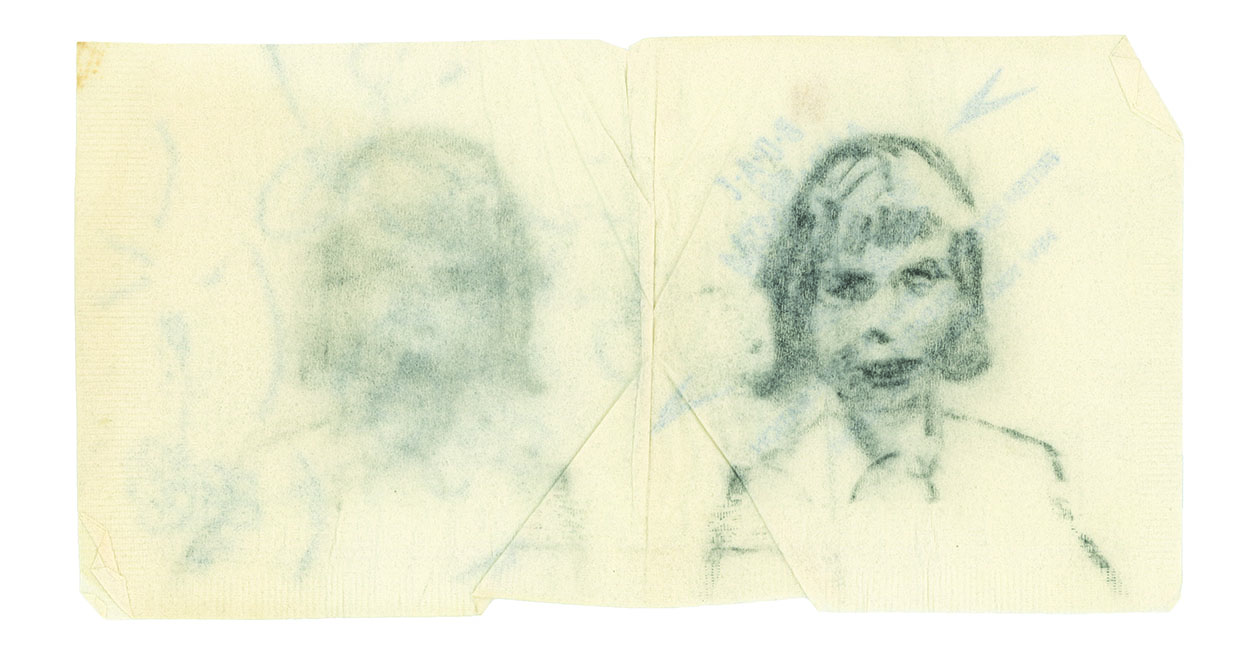 Louis Kahn's napkin sketch of Harriet Pattison, made in a café at Idlewild Airport as they waited for one of his flights. Collection Harriet Pattison. Reproduced by permission of Sue Ann Kahn.

On a winter day in 1953, a mysterious man in a sheepskin coat stood out to Harriet Pattison, then a theater student at Yale. She would later learn he was the architect Louis Kahn. This chance encounter served as preamble to a 15-year romance, with Pattison becoming the architect’s closest confidante, his intellectual partner, and the mother of his only son. Her new book, Our Days Are Like Full Years: A Memoir with Letters from Louis Kahn, weaves together her story–that of a young woman striving to raise a family while forging an artistic path of her own as a landscape architect–with letters, postcards, telegrams, drawings, and photographs that reveal Kahn’s inner life and his architectural thought process. In this recent q&a, Harriet shared with us some insights into how the book came together.

The Architectural Archives at the University of Pennsylvania Stuart Weitzman School of Design will host an online launch event for this book on Thursday, October 29th (which also happens to be Harriet Pattison’s birthday). Register here for the event, which is free but requires registration.

Yale University Press: Though much of the correspondence between you and Louis Kahn included in the book is tender and quite beautiful, this is also a story about heartbreak and disappointment. What was it like to revisit these bittersweet memories and documents years later? As you wrote and assembled the project, did your view of any of the events described here change?

Harriet Pattison: I have been lucky to live long enough to see the world change. Looking back now at my relationship with Lou and the time period in which we knew each other, I have a greater understanding of Lou’s moral and ethical battles, and the toll that they took on his life. As an artist, he was willing to give himself away completely; to suppress his individual life and put everything into his work, which is greatly taxing. You can see this in the photos I included of Lou as he ages—though he may not have been spiritually drained, he was physically depleted. I remain astonished at what Lou accomplished in 15 years.

YUP: How would you summarize Lou’s impact on the world of architecture? What trends, styles, or concepts do you see as owing to the influence of his creations and design philosophy?

HP: Lou’s supreme wish was to see his buildings constructed and to express himself. He is a model for architects going into the profession: he resisted quick solutions and took the time to go deeply into each project. He never turned out a building like the last one he did, but rather each was entirely unique. Notably, too, he did not want disciples and could spot copies. And was dismayed by people having to make them, evincing both the failure and irrelevance of imitation.

Contemporary and future architecture can be informed by his idealism and the fact that he was making constant philosophical inquiries into architecture. Along with his desire to see his ideas actualized, he recognized the architect’s greater responsibility to society to make the world better. This was part of his motivation. He also carried that mission out, in part, through his devotion to teaching. He was constantly reevaluating his teaching methods and took seriously his responsibility to those he taught and inspired, surrendering himself to the same questioning and opportunity for self discovery as a student.

YUP: Did you always know this would be a visual project, or did you ever consider writing it as a traditional memoir? What do these images reveal about you, Lou, or your romantic relationship?

HP: The project actually did not begin as a memoir at all. I was given grants to publish Lou’s letters. I was reluctant to include my own experience because I have spent much of my life in the shadows. My son Nathaniel and also the curator Bill Whitaker, however, consistently encouraged me to bring myself into the book to provide a better semblance of the era and bring that to a pulsating form and life, as well as to underlie the authenticity of my account. Lou was a visual person, as am I, so this format helps people to experience how we thought and interacted, and particularly helps to understand Lou’s work. The visual component illustrates the experience of seeing his buildings materialize: to go from an idea to a simple drawing to construction and, finally, to walk into a space. These small drawings became enormous presences; Lou’s buildings transformed the landscapes themselves. To include visuals from every stage of the process was the closest I could come to giving readers the experience of witnessing architecture in action.

Harriet Pattison, FASLA, is a distinguished landscape architect. She was Louis Kahn’s romantic partner from 1959 to 1974, and his collaborator on the landscapes of the Kimbell Art Museum, Fort Worth, and the F.D.R. Memorial/Four Freedoms Park, New York. She is the mother of their son, Oscar-nominated filmmaker Nathaniel Kahn.