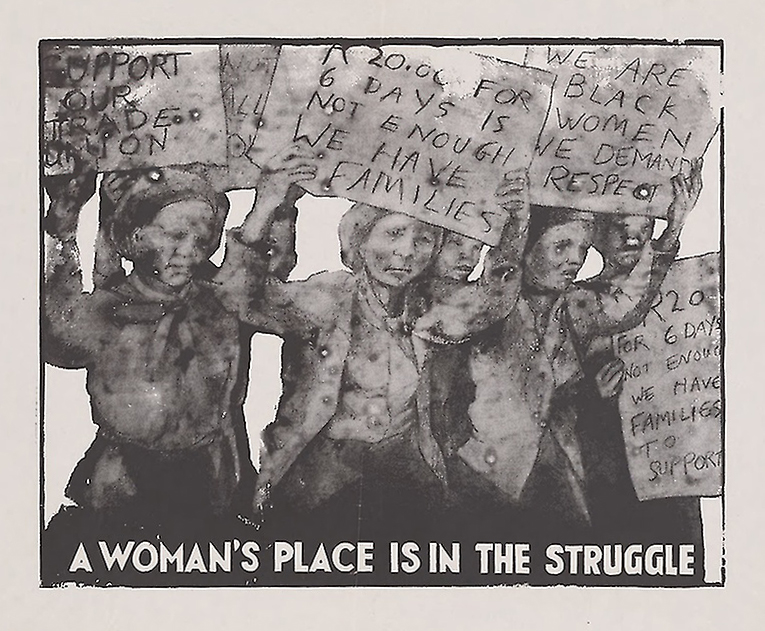 Antawan I. Byrd and Felicia Mings—

In South Africa separate and unequal access to education, health, and economic opportunity long predated the 1948 implementation of apartheid law—as did resistance to such conditions on the part of Black, Indian, and Colored (multiracial) women. Starting in the early twentieth century, women rallied through self-organized committees as well as membership in trade unions and political parties. On August 9, 1956, twenty thousand women from across South Africa marched to the union buildings in the capital city of Pretoria in defiance of Pass laws that severely restricted movement within the country for women of color (and their male counterparts) seeking to work or travel for any reason. This particular instance of women’s collective action is commemorated through a poster produced by the Medu Art Ensemble. Active between 1979-1985, Medu was a multiracial collective of South African and international visual artists, performers, and writers who fought for liberation in southern Africa from their base in Gaborone, Botswana. The poster, Now You Have Touched the Women…. (1981) (fig. 1) speaks to the power of collectivity, of ordinary citizens constituting a plurality of voices, banning together for unified political action.

Beyond modeling the adroit interplay between text and image found across Medu’s political posters, this object is emblematic of how Medu’s work resonates with contemporary discourse. Specifically, the collective’s empowered representations of women across its posters refract the inestimable influence of women in activism, political leadership, and civic organizing today.

Though relatively few black women were active within Medu, the collective made a point of featuring them prominently on the numerous posters they designed to encourage resistance to apartheid’s inequitable laws and violent conditions. Black women also figured as subjects in the collective’s theater productions, and poetry. Medu’s members, which included a roving roster of approximately sixty artists, maintained that oppressed groups needed to see themselves in images in order for such visuals to communicate effectively. Now You Have Touched the Women… prominently features the silhouette of a strong woman represented through an accretion of black, angular screen-printed shapes. Stoic in posture, in a frontal view with an upraised fist clenched around a broken chain, her imposing presence emanates defiance. This sense of confrontation is amplified by the words printed across the lower half of the poster, “NOW YOU HAVE TOUCHED THE WOMEN / YOU HAVE STRUCK A ROCK; YOU HAVE DISLODGED A BOULDER; YOU WILL BE CRUSHED”—lyrics from a popular protest song, one that was sung during the August 9, 1956 Anti-Pass campaign march which was the impetus for South Africa’s annual celebration of Women’s Day in August.

The same year the foregoing poster was made, Medu produced another homage to Women’s Day with a black-and-white poster that, through the technique of photomontage, brings together more than a dozen pictures of women activists (fig. 2).

The diverse images, jaggedly clipped from photographs and newsprint sources, overlap and are arrayed against a background of text that repetitively reads “WOMEN RESIST.” Reflecting this exhortation, the poster features numerous images of women in action, advocating for causes both within and beyond South Africa—note the woman wearing a badge that reads “Support Bolivian People.” Other images place women at the helm of various international rallies–by showing them with upraised fists, waving flags, carrying placards, and speaking to broad audiences. Produced collaboratively by members of the collective, the poster carries a bold title that reads “Women Unite Against Apartheid.” And at the lower right of the poster, the universal symbol for women appears inscribed with the text, “INTERNATIONAL WOMENS DAY MARCH 8.”

Like many of the hundreds of political posters the artist collective produced during its six years of activity in Gaborone, Botswana (1979-1985), this work’s gathering of disparate images speaks to Medu’s overall sensibility as a collective composed of artists of different racial, national, and political backgrounds. Moreover, the poster operates at both micro and macro levels, addressing the sheer force of women in the situated struggle of anti-apartheid resistance, while recognizing the broader role, and necessary visibility, of women in activism and political debate internationally. Although many of Medu’s posters commemorate specific events, they’re rarely inscribed with dates indicating the year the posters were made. This is suggestive of how the members hoped, if not anticipated, that their posters would have an enduring relevance or evergreen appeal. To encounter this poster today, nearly four decades after it was produced, is to acknowledge not only the outsize role played by women in the anti-apartheid struggle, but equally their power to collectively organize in ways that continue to have widespread influence across civic and political spheres today.

Following Medu’s dissolution in 1985, women in the collective continued to have a positive impact on arts, culture, and civic life through personal and collective endeavors. Instances of this include Baleka Mbete’s role within the African National Congress political party, and Pethu Serote’s work in education and gender equity in South Africa. In 1994, to mark the occasion of South Africa’s first democratic election, Judy Seidman partnered with a multiracial women’s collective, Speak, to create the poster Women: We Fought for the Vote Now We Must Claim Our Rights! (fig. 3).

This poster prominently features a woman positioned as if delivering a speech at a lectern, with her left arm raised and her right hand clenching a microphone. The woman’s shoulder and mid-section have been woven into a tapestry of scenes that include a portrayal of women side-by-side at a factory, a woman on a tractor mowing a field, a woman rebuking a man’s advance, and a woman minding a child while cooking. These scenes, and the poster at large, echoes the content put forward in Speak’s eponymously titled magazine, founded in 1982. Speak was a critically important platform for women’s rights, including—unlike other publications of the time—those concerning sexual and reproductive health. Like the scenes depicted in this poster, ordinary individuals continue to rally together to change the conditions of societies through protest marches, calls to vote and broader collective organizing, rendering Medu’s work as not only an important reflection and archive of their time but also a guidepost for continued organizing in the present—organizing that more often than not will include women at the helm.