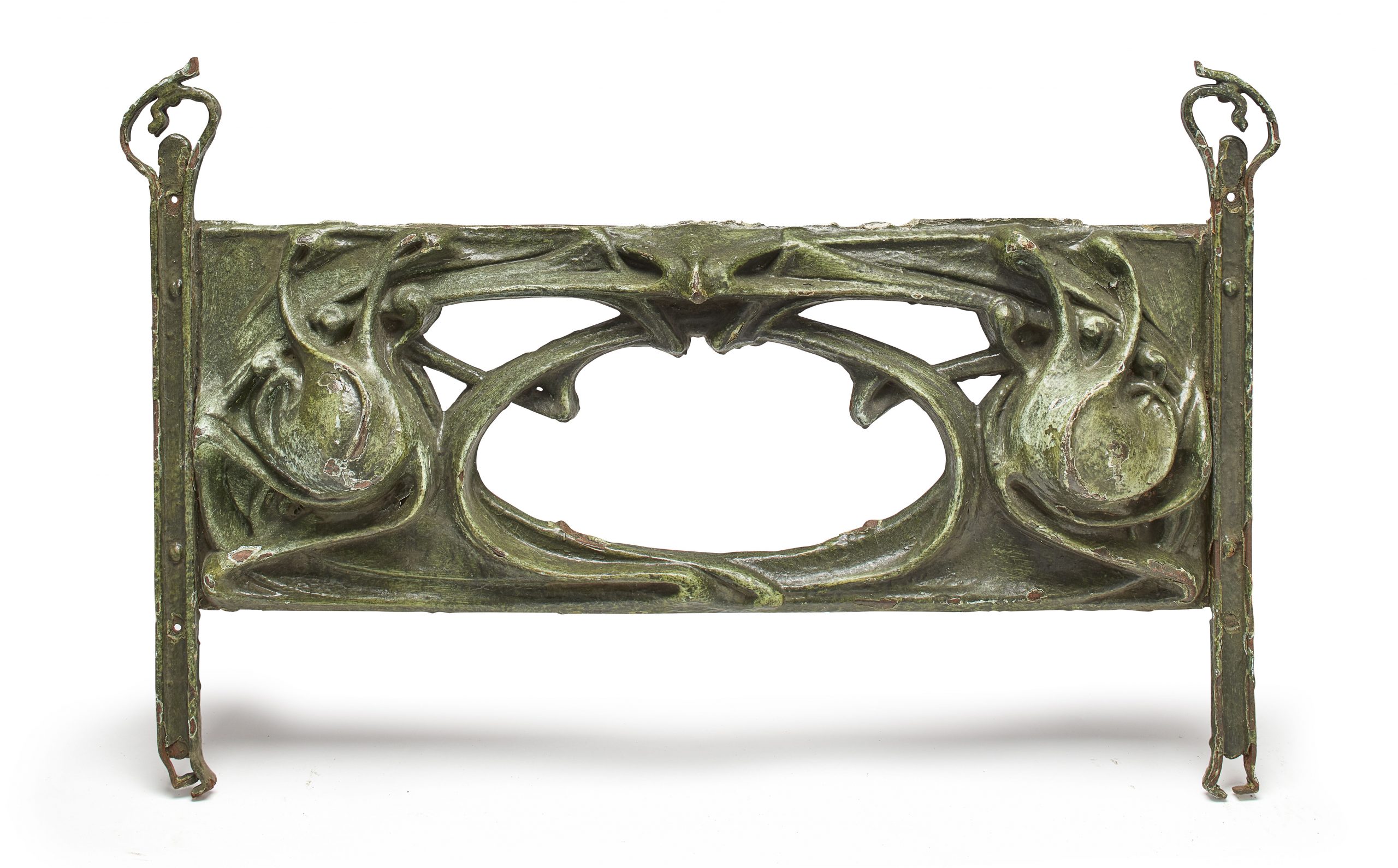 Hector Guimard (1867-1942) was one of France’s greatest Art Nouveau architect/designers. In an exhibition organized by the Richard H. Driehaus Museum in Chicago and Cooper Hewitt, Smithsonian Design Museum in New York, accompanied by a gorgeous catalogue, seven distinguished
scholars share their research and knowledge of Guimard. The book’s insightful essays help us better understand the architect’s groundbreaking work.

The cover features the entrance for the Paris Metro–Guimard’s most famous work–in a graphic presentation by award-winning designers Miko McGinty and Rita Jules; the book reflects the elegance and essential simplicity of the architect’s designs.

Surviving Metro entrances can still be seen in Paris today. These cast-iron structures, which were designed to be industrially produced, brought Art Nouveau design to a mass audience; everyone in Paris–rich and poor–had access to the Metro as a means of transportation. This modern and democratic approach to essentially luxurious design forms is part of the book’s innovative look at Guimard as a modern designer. Guimard’s aesthetic was based on natural forms rather than on the historic styles that were the predominant style of the day, as well as the traditional training for Beaux Arts architects. His abstract Art Nouveau designs, often comprised of curves and whiplash decorations, evoked movement and growth.

Sarah Coffin and I co-authored an essay that presents Guimard’s concept of a unity of design for exterior and interior architecture and describes how the idea was influenced by the British Arts and Crafts movement – a connection little thought about previously. This unity required all the furnishings to be integral to the architecture, including through manufacturing contracts. A Guimard interior reflected the range of his designs for the decorative arts – textiles, furniture, ceramics, metalwork, jewelry and even a wedding dress for his wife – all of which contributed to a unified whole and the overall harmony of the design.

Isabelle Gournay’s perceptive essay focuses on Auteuil – the southernmost area of the 16th Arrondissement in Paris – where Guimard lived and where most of his surviving work is located. Auteuil was to Guimard what Oak Park was to Frank Lloyd Wright – a neighborhood of likeminded clients and friends where his ideas could flourish. Professor Gournay provides a vivid account of the setting – its distinct topography and architectural heritage – which influenced Guimard’s work.

Philippe Thiébaut, the Curator for the pioneering Musée d’Orsay exhibition on Guimard in 1992, offers a moving essay on the architect as an extraordinary draftsman. Drawing was fundamental to Guimard’s entire career, from his studies at the Ecole des Beaux Arts to his last commissions before he immigrated to the United States. The preservation of a majority of Guimard’s drawings for buildings and decorative arts documents the design process for both his built and unbuilt projects.

A second essay by Thiébaut addresses Le Style Guimard. In 1903 Guimard waged a well-organized publicity campaign to advertise his work and created a brand he named Le Style Guimard. He began this campaign on the occasion of an exhibition of his work at a Housing Exhibition held at the Grand Palais in Paris in 1903. He continued to use his brand throughout his life as a way to promote his design philosophy and his work.

Georges Vigne’s contribution to the book explores Guimard’s industrial designs. Although most of Guimard’s decorative designs were part of his architectural commissions, he nevertheless was very interested in what could be achieved with manufacturing of designs which would be available to many. His goal was “beauty affordable to everyone.” His designs in cast iron for the Paris Metro entrances led to his work with the Saint Dizier foundry and the production of ornamental cast iron railings intended to enhance residential and commercial architecture. Other production projects came Guimard’s way, including a design for perfume bottles for the Paris firm F. Millot.

Barry Bergdoll’s essay, “Signature vs. Standardization: Guimard and Prefabrication,” considers Guimard’s commissions and his standardized designs for mass produced work, representing the poles of his work throughout his life. For his architecture, Guimard sought to create an
immediately recognizable personal style. During World War I he developed a process of standard construction to meet housing needs, inventing a system of building blocks that could be produced off site and assembled at any scale on location. Bergdoll’s essay explains this radical invention and why it was an important part of the development of modern architecture.

Sarah Coffin’s essay focuses on Adeline Oppenheim Guimard, a wealthy American working in Paris as an artist, whom Guimard married in 1909 when he was 43 and she was 37. Through her family fortune, he was able to build his dream home on Rue Mozart and design all the furnishings to be integral to the architecture. They collaborated to promote the Le Style Guimard brand and after his death she donated her husband’s designs and drawings to American and French museums, helping to secure his legacy for future generations.

Guimard was influential throughout his life – not only on architects but also on artists such as Picasso and Dali. Alfred Barr, Director of the Museum of Modern Art and a friend of Guimard wrote: “Guimard has created a new type of biomorphic abstract form. It is a symbolic form that expresses the original rhythms of nature…” Another critic proclaimed: “A dwelling by Guimard becomes a palace where our eyes are enchanted, where our soul rests. It is the poetry of architecture.”

David A. Hanks is a design historian based in New York and the curator of the Stewart Program for Modern Design, Montreal.