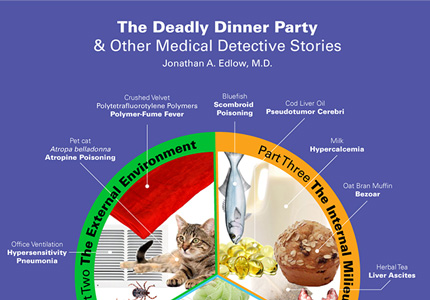 We can’t get enough of detective mysteries. On television, police or medical procedurals and dramas such as CSI: Crime Scene Investigation, House M.D., Sherlock, and Elementary, draw us from the comfort and safety of our homes into high-stakes worlds of danger, intrigue, and death. Our continued fascination with “whodunit” manifests itself on the bookshelf as well – even J.K. Rowling published the crime fiction novel The Cuckoo’s Calling under the pseudonym Robert Galbraith in 2013. Since its publication in 1939, Agatha Christie’s mystery novel And Then There Were None remains one of the bestselling novels of all time.

In The Deadly Dinner Party, a collection of real-life medical detective mysteries, Jonathan A. Edlow contributes to the tradition of the detective mystery while carving out new space for himself. Just as Sir Arthur Conan Doyle, the creator of the beloved detective Sherlock Holmes, was a physician, Edlow is a practicing physician and Harvard professor. In an exemplification of the close relationship between medical investigation and stories of crime detection, Doyle’s teacher, the surgeon Joseph Bell, served as inspiration for Sherlock Holmes, and Bell’s sensitivity to detail and use of deduction, inference, and observation as a doctor became the basis for Holmes’s deduction techniques as a detective. Edlow’s stories are amalgamations of medical investigations and detective stories. At first, the doctors and epidemiologists of The Deadly Dinner Party appear to be sleuths, or protagonists, while pathogens are easily cast as villains. However, the stories actually blur the distinctions between the role played by humans and the role played by pathogen. 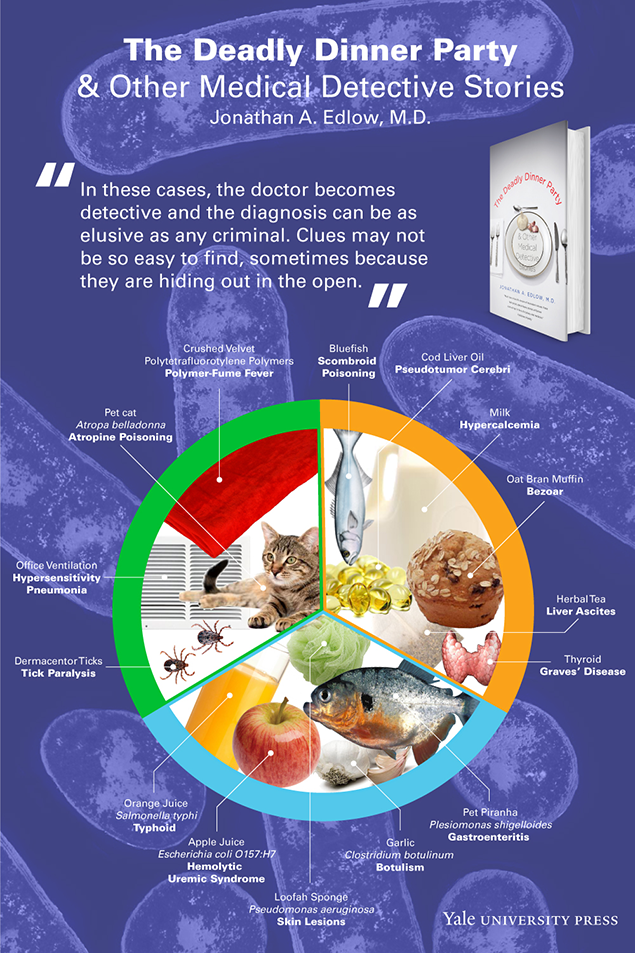 For instance, in the titular story, “The Deadly Dinner Party,” after attending a casual get-together of friends, the main characters fall ill and develop symptoms such as slurred speech and muscle weakness over the course of the next days. While the story depicts the process of diagnosing the dinner guests with botulism, the bacterium Clostridium botulinum, the toxin that causes botulism, is as central a character as any of the human ones. “The Deadly Dinner Party” interweaves an extensive history of the bacterium’s development with the plight of the dinner party guests and doctors. And unlike any of the other characters of the story, Clostridium botulinum gets its own origin story:

Finding the organism that was actually causing botulism is a story in itself. It starts in the tiny village of Ellezells, Belgium. Thirty-four individuals attended a funeral on a cold day in December 1895. The food served for the occasion included both smoked and pickled ham. The latter had been pickled within twenty-four hours of slaughter and kept in brine for eleven days before it was consumed. It didn’t look right and it didn’t smell right, but that did not seem to have dampened the enthusiasm with which it was eaten by the guests and members of the village band, who apparently were playing both for the funeral as well as a local festival. The first victims fell ill in less than twenty-four hours, and in all, twenty-three people became sick. Three died, and ten nearly died. Some who had eaten smaller amounts had a mild illness, and a few, who had eaten only fat or very small pieces of the meat, had no symptoms at all.

Back in the case of the deadly dinner party, after singling out the garlic bread and the cheese ball served that night as likely culprits, the health inspectors turned to history to solve the mystery:

The CDC had already notified Pickard that a garlic-in-oil preparation had been responsible for a 1985 outbreak in Vancouver, Canada. The incident came to light when two teenage sisters and their mother, who had traveled from Vancouver to Montreal, developed visual problems, difficulty swallowing, and weakness. Botulism was diagnosed… the source turned out to be garlic packed in oil, which was supposed to be kept refrigerated but had not been.

Yes, the doctors and health inspectors were the ones who figured out the causes behind this incidence of botulism at the end of the story. But unlike Sherlock Holmes, who solved his mysteries by predicting human behavior, the health inspectors accomplished this by also delving into the relationship between humans and Clostridium botulinum. In the preface, Edlow writes, “People necessarily have an anthropocentric view of the world, but even though we may be at the top of the food chain, that doesn’t mean we have dominion over the world or our environment.” Perhaps the key mystery this collection attempts to solve is the relationship between humans and microorganisms.