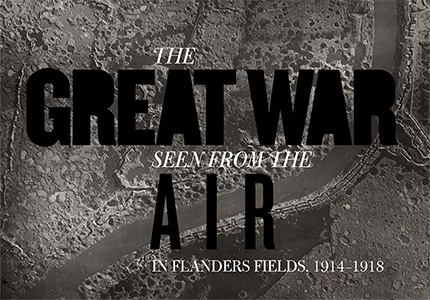 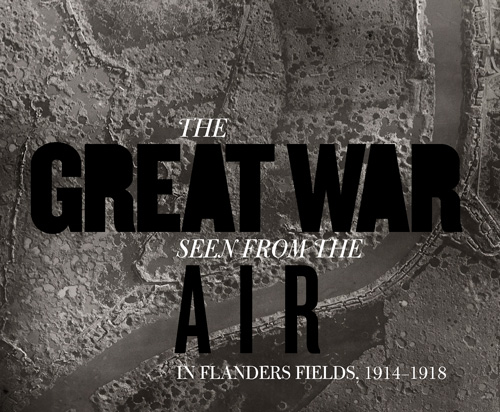 The Great War Seen from the Air in Flanders Field, 1914-1918, a monumental publication we are pleased to distribute on behalf of our Belgian colleagues at Mercatorfonds, gathers a wealth of meticulous research and carefully curated images – more than 500 images, culled from an archive of over 20,000 to provide the most comprehensive overview of aerial photography during the First World War. The eye-opening book features clear and detailed annotations throughout and striking overlays that provide multiple ways of understanding the scene.

Taken together, this constitutes a far more nuanced account than the straightforward use of aerial photographs as illustrations of “before” and “after” the conflict. As the introduction notes, these images are deeply human:

“Although aerial photography may appear at first glance to be ‘devoid of detail’, stripped of any human presence, on closer inspection they reveal a complete overview of human activity in a war; what we see is invariably the record of humanity at work.”

The line of a trench and a row of craters can tell a haunting story. Each photographs represents one moment in time at one location from a war spanning years and continents. From an aerial landscape we find military strategy, environmental destruction, and insight into the kinds of decisions leaders make in the face of war. 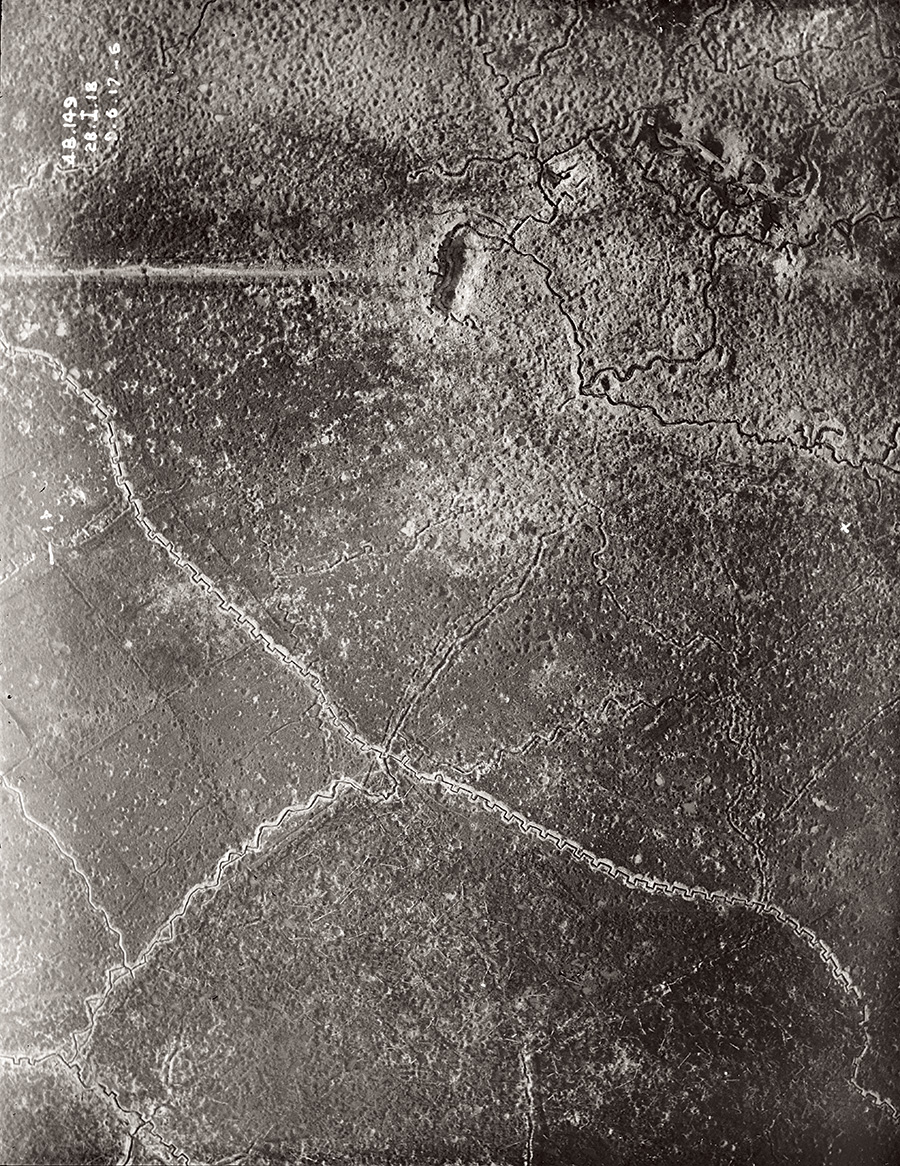 This is an image of Hooge, which was overtaken by German forces in 1916. In 1917, the British implemented a series of mine detonations and artillery fire as they advanced from Ypres Salient toward the coast. The Third Battle of Ypres was imminent, and this photograph shows a newly dug trench on the British side amid a cratered terrain. 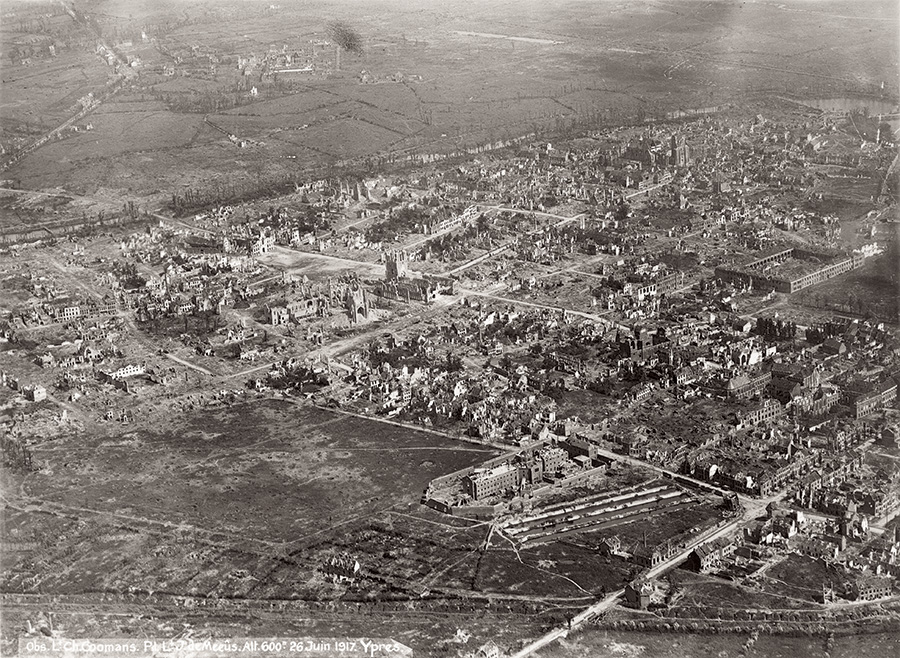 Likely taken by Australian war photographer Frank Hurley or his assistant Hubert Wilkins, this image shows Ypres’ town centre in September 1917. Visible are Dutch infantry barracks, and Ypres Reservoir Cemetery. In The Great War Seen from the Air in Flanders Field, 1914-1918, this image is set against even more detailed shots of the same location. 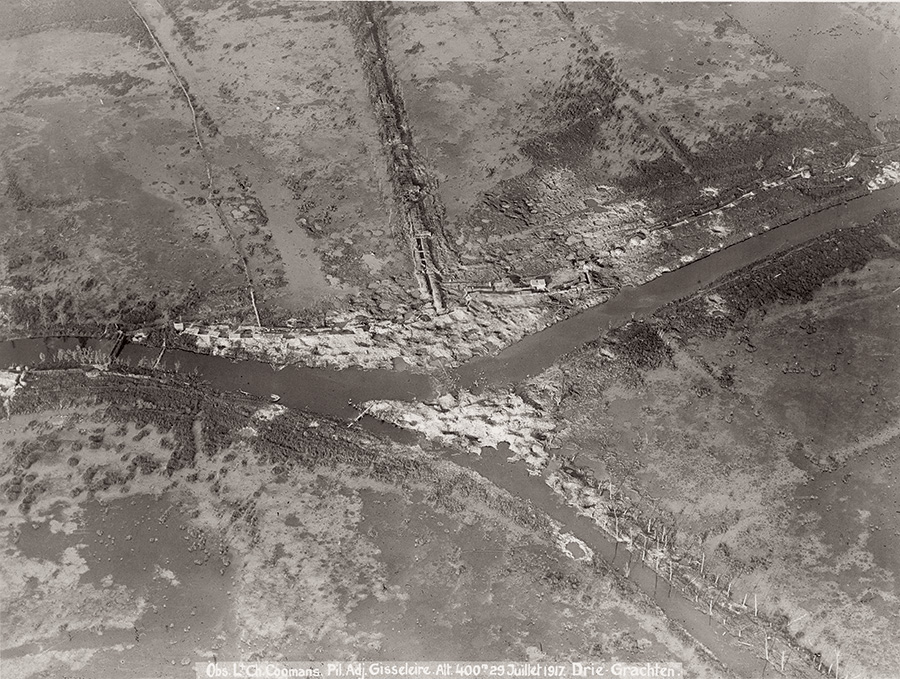 Trenches and bunkers crowd the western bank at Dries Grachten. A French outpost captured by the Germans, this is where Yprse-Yser canal, the Ieperlee and the Martjesvaart meet. This photograph was taken on 29 July, 1917, before the Third Battle of Ypres, and is a witness to the preparatory bombardments in anticipation of the conflict. 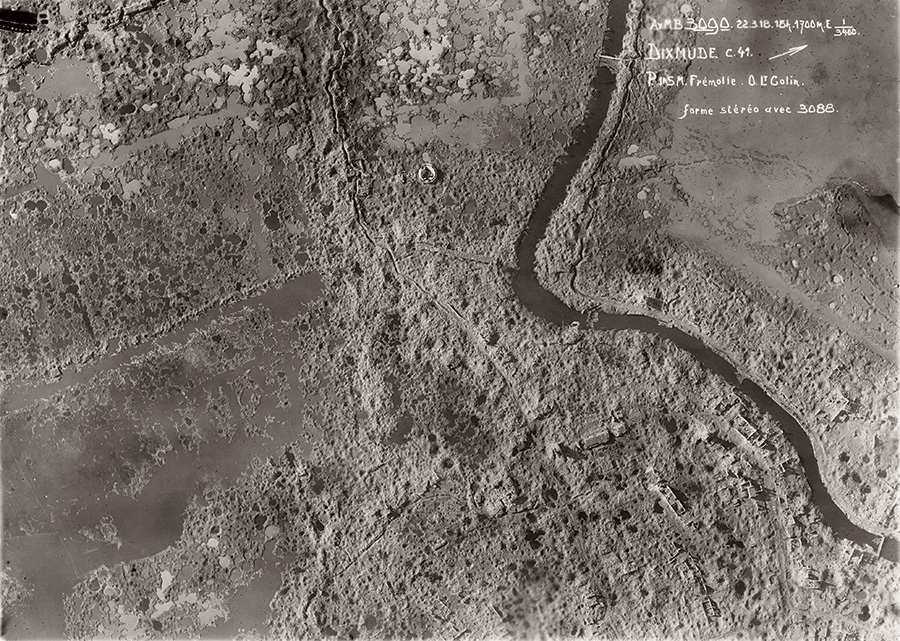 The town of Dikmunde, almost destroyed in 1918. Due to the intensity of the bombardments, German bunkers which were concealed within ruined houses are now seen. 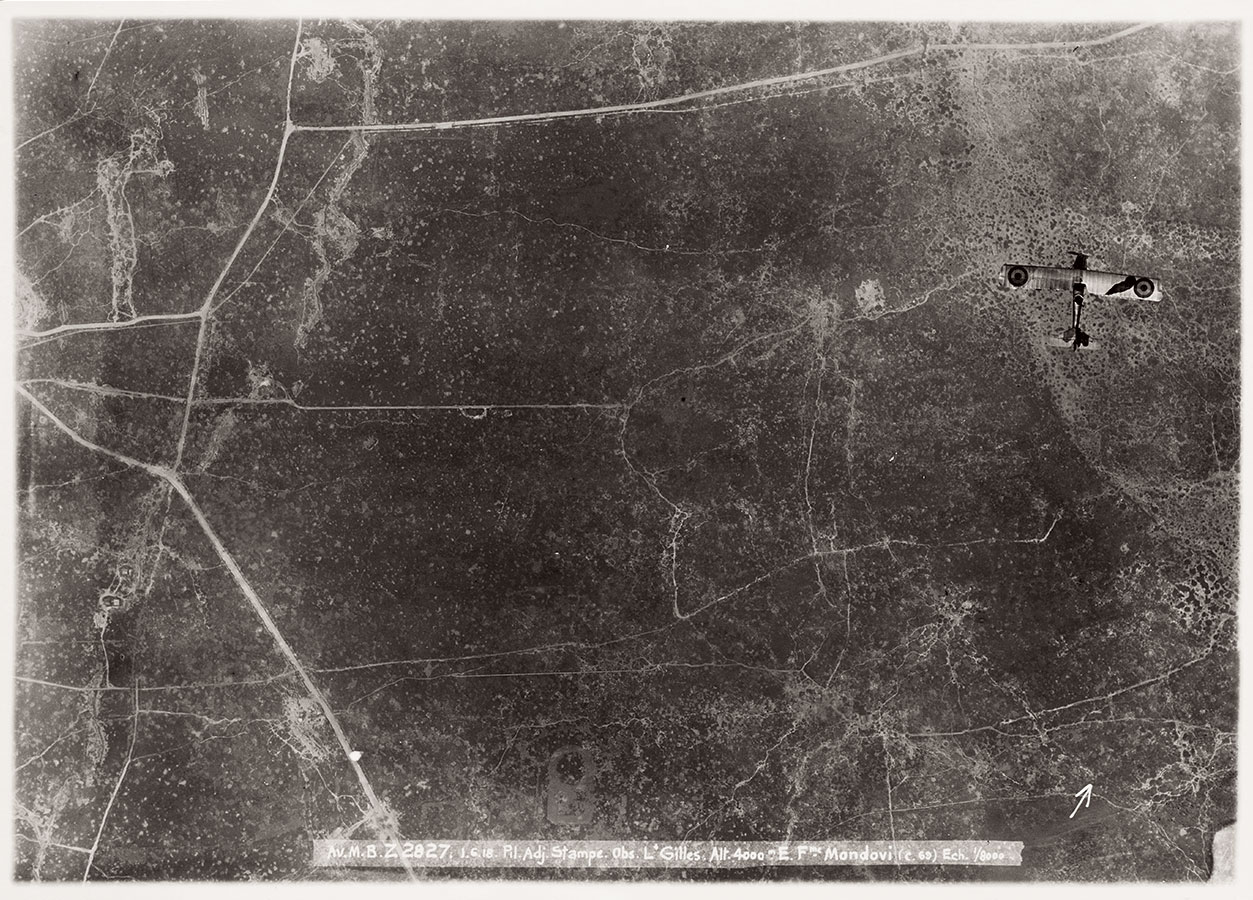 This photograph depicts the feat of aerial photography itself over enemy territory. We see a Belgian Breguet 14 photographed above Kortekeer in 1918. “They took photographs from an open cockpit,” the book explains. “The exposure had to be set manually and after every shot the glass negative had to be replaced and stored away. Meanwhile, the observer photographer combed the skies for enemy planes looking for observation planes to shoot down.”

Jean Bourgeois of Ghent University explains how we can begin to comprehend the place of these images in our understanding of history. Bourgeois writes in the preface:

“Everywhere in the world landscapes tend to develop and change to the rhythm of the decades, centuries, and even millennia. Here four years sufficed. Unimaginable. And if our minds can also visualize in this landscape living beings, allies, or enemies, civilians or military, the idea of war becomes even more of a nightmare.”