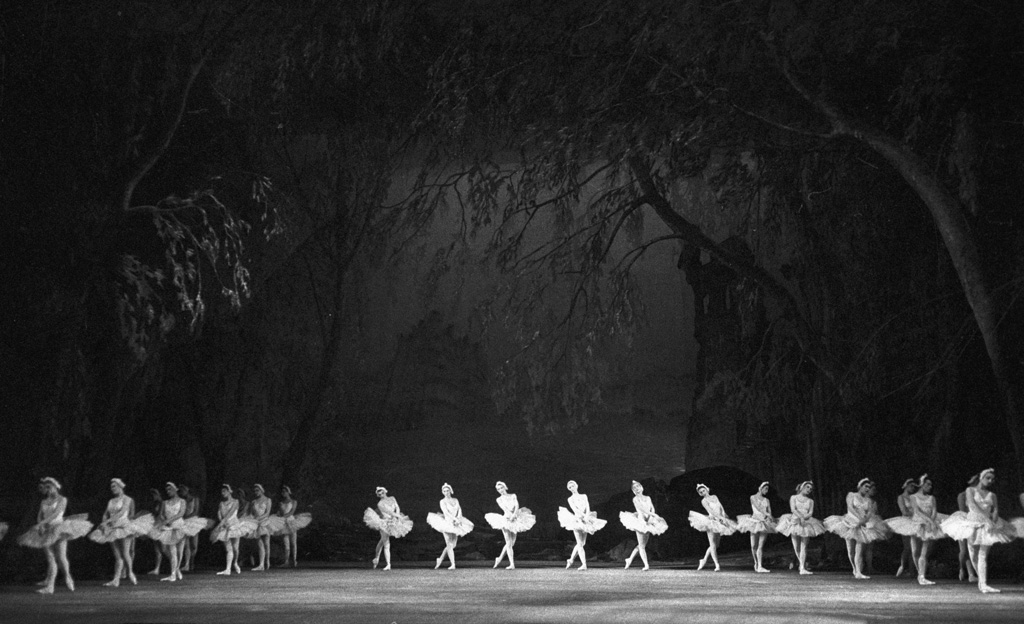 “Ballerinas dance anti-Putin Swan Lake in Odessa.”  The headline sounds like a set-up for a sketch comedy routine but it was deadly earnest. This past May, four Ukranian ballerinas donned tutus and pointe shoes and interlaced arms to dance the four little swans quartet from Swan Lake as an act of protest against Russian president Vladimir Putin.

“We are here to send a message that by unleashing aggression against Ukraine, Vladimir Putin has made a fatal mistake,” regional lawmaker Oleksiy Honcharenko told Ukrainian television cameras when introducing the Swan Lake excerpt. “Today Odessa, as a cultural capital, performs for him this portentous composition.”

Staged outdoors, and with a military tank as the backdrop, the choice of Swan Lake was a deliberately satiric nod by the Ukranians to the Soviet-era tradition of televising the ballet Swan Lake to signal a change in the country’s leadership. In 1982, 1984, 1985, and 1991 the announcement of the deaths of Leonid Brezhnev, then Yuri Andropov, Konstantin Chernenko, and, finally, the failed coup against Mikhail Gorbachev,were all heralded by official silence and a TV broadcast—Swan Lake in its full-length, four-act, three-hour expanse, preempting all regular programming.

This pairing of Russian ballet classicism with Soviet power shifts through TV broadcasts of Swan Lake at crisis points may seem puzzling to outsiders. However, those who experienced it within the Soviet system say it rapidly came to trigger just what it was supposedly intended to defuse—heightened anxiety about an imminent political shift and the awareness that someone (or something) had died:

When seasoned lawmaker Sergey Filatov, a leader of a group defending the Russian White House from the August 1991 anti-perestroika coup, turned on the TV while relaxing at the southern resort of Zheleznovodsk on August 19, 1991 he recounts his rising anxiety: “[I] saw the swans dancing. For five minutes, ten minutes, for an hour. Then I realized that something had happened because we learned to read between the lines in Soviet times,” he said.[i] Those looping Swans made Filatov jump on the next plane to Moscow where indeed an anti-perestroika coup by Communist Party hardliners was in progress.

Russian censorship may be considered a vestige of the Soviet years and its use of a ballet to portend traumatic events may be dated, but this summer, not too long after the Ukranian Swan Lake protest, these practices came roaring back.

Last year Putin had banned the use of curse words in Russian media—primarily words describing male and female reproductive organs, copulation, and “women of loose morals” according to the BBC. On July1, new prohibitions were signed into law by Putin, censoring the use of curse words in the arts and restricting the freedom of speech, artistic expression and criticism of the Russian government. These newest censorship laws, in targeting artists, carry a particular chill.

The prohibitions were conceived in the shadow of the 2012 arrest of the punk protest group, Pussy Riot, whose members were incarcerated after they performed a song in Moscow’s main cathedral that was considered offensive.  Affecting books, films, music, theatre productions among other art forms, the new law punishes any artist or cultural institution that uses curse words with fines of $70 and $1400 respectively.

Dating from the Russian Revolution, the political force of the arts in Russia has been viewed by leadership as both symbolic and deeply practical. Through the reign of Stalin and into the present moment the arts, and particularly time-based art like film, theatre and dance, were considered important mediums of ideological persuasion.

Swan Lake was used as hedge against saying anything in a time of political emergency, but to the astute dance observer, Swan Lake actually did offer an explanation. Through the medium of dance a vision of idealized nationalism can be performed – a trigger for sentiments of kinship at the inherent “Russianness” of these bodies on that stage, in those formations. There are few stronger visceral images of social harmony on stage than an ensemble of bodies rehearsed into that tight unison of the corps de ballet and few more seductive images for the spectator that prompt the illusion of vicarious participation, than the assembly and dispersing of circles/lines and diagonals of identically costumed women in swan feathers. It is like some primordial flock to which we all secretly yearn to belong.

This rising censorship against the arts in Russia however, suggests artists there may do well to revisit the strategies that enabled their artistic predecessors to survive and make art under totalitarian rule in the previous century as they ponder the growing shadows.

Janice Ross, Professor of Theatre and Performance Studies at Stanford University, is the  author of Like A Bomb Going Off: Leonid Yakobson and Ballet as Resistance in Soviet Russia, (January 2015), Yale University Press.