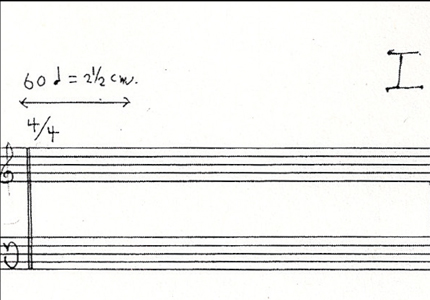 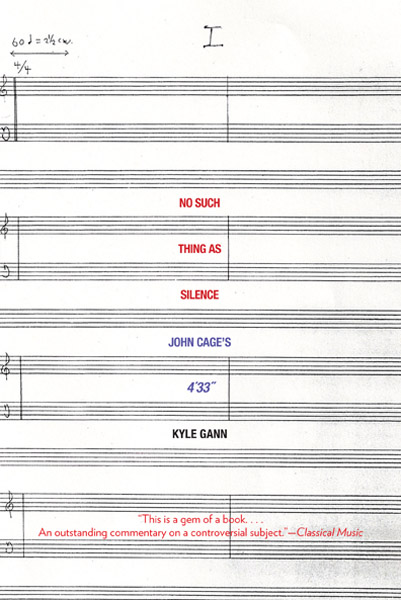 Today is the birthday of the composer John Cage, who is best known for 4’33”, a piece of music in which no intentional sounds are made by the artist or performer. Many, if not most, have encountered references to the piece, at least in comics and cartoons. Yet it may not be immediately clear how to approach or categorize 4’33”. Critics and fans have called it, among other things, a hoax, a joke, a bit of Dada, a piece of theater, a thought experiment, a kind of apotheosis of twentieth-century music, and an example of Zen practice. In No Such Thing as Silence, Kyle Gann argues that some of these interpretations are more compelling than others and he offers insights into Cage’s life, influences, work, and legacy.

The details of the first performance of 4’33” give useful context. Gann describes the scene in 1952 at the open-air Maverick Concert Hall just south of Woodstock, New York. David Tudor sat down at the piano, closed the keyboard over the piano keys, and looked at his stopwatch. Over the following minutes, he inaudibly uncovered and covered the keys twice and turned pages of blank sheet music. After four minutes and thirty-three seconds, he stood up to receive applause.

With that account in mind, Gann dismisses the idea that 4’33” was a hoax. Cage made no attempt to deceive his audience or make them think they’d heard music they did not hear. Gann also refutes the suggestion that Cage was after financial gain. The piece was not commissioned and the occasion for its performance was a benefit concert, so the money went to neither Tudor nor Cage. The notion that 4’33” was intended to amuse also seems unlikely since the composer feared people would call it a joke. He spoke about the piece in a deeply serious, even philosophical tone register throughout his life.

Gann does see a plausible connection between 4’33” and Dadaism, the early twentieth-century art movement. Cage counted Erik Satie among his favorite composers and noted that “what was Dada in Duchamp’s today is now just art.” The theatrical aspects of 4’33” deserve mention as well. The audience expected sound from the musician and the performer expected silence from the recital audience. Often, both expectations were frustrated, as the musician made no audible sound and audience members cleared their throats, muttered, or heckled. The musician and the audience broke character in refusing to act out their conventional roles.

The remaining interpretations—that 4’33” was a thought experiment, a kind of apotheosis of twentieth-century music, or an example of Zen practice—strike Gann as more likely to capture the essence of the piece. 4’33” worked as a thought experiment in that Cage used the scenario of a performance to frame the mundane sounds the audience heard for those four and a half minutes. That framing, Gann writes, worked to “drive home the point that the difference between ‘art’ and ‘non-art’ is merely one of perception, and that we can control how we organize our perceptions.” Gann, as a composer, also makes a case for understanding Cage’s work as a kind of apotheosis of twentieth-century music. He explains how classical music had become so highly structured and complex that it verged on the incomprehensible, and that 4’33” symbolically cleared the ground and began a shift towards minimalism. The three sections Cage designated in the piece identify 4’33” as a sonata, which reaffirms its place in the classical world.

A significant part of No Such Thing as Silence deals with the ways in which John Cage was inspired by Zen and Zen practice. Zen’s relationship to 4’33” is complex, but it is possible to sketch a few key connections. Zen involves letting go of desire because desire underlies frustration and suffering. If you attend a concert with a desire to hear specific sounds, you will be frustrated, as some who listened to 4’33” clearly were. Zen also teaches that all divisions are illusions of thought, and that in reality there is no difference between life and death, good and bad, or happiness and misery. All existence is one. It is in this spirit it that Gann describes a powerful way of approaching 4’33”:

If you are able to appreciate, at least on an intellectual level, that from a Zen standpoint there is no difference between playing a note and not playing a note, that a chord on the piano and a cough from an audience member behind you and the patter of rain on the Maverick Concert Hall roof are not different, but the same thing—then you may be able to think of 4′33″ as something more profound than a joke, a hoax, or a deliberately provocative and nihilistic act of Dada. If you can turn toward the whir of the wind in the oak trees or the pulse of the ceiling fan the same attention you were about to turn to the melodies of the pianist, you may have a few moments of realizing that the division you habitually maintain between art and life, between beautiful things and commonplace ones, is artificial, and that making it separates you off from life and deadens you to the magic around you.

If you want to continue celebrating Cage’s birthday, check out Silence, by Toby Kamps and Steve Seid. The book examines the ways twenty-nine artists invoke silence to shape space and consciousness. You can read an excerpt here, so long as you remember that the divisions between here and there, excerpts and full texts, and one book and another are illusory.