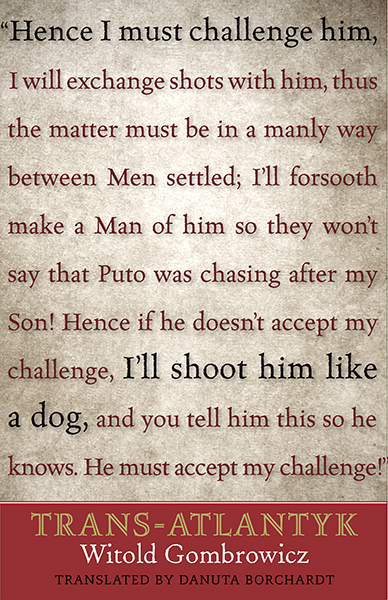 Many consider Polish novelist Witold Gombrowicz one of the greatest writers of the past hundred years and Danuta Borchardt is undoubtedly one of his finest translators. Her rendering of Ferdydurke won the 2001 National Translation Award given by the American Literary Translators Association, and her recent edition of Trans-Atlantyk has garnered praise as well. Trans-Atlantyk recounts the often farcical adventures of a penniless young writer stranded in Argentina, and it does so in the style of the gaweda, a tale told by the fireside in a language that originated in the seventeenth century.

Trans-Atlantyk is notoriously difficult to render in English, and Borchardt has written eloquently about the challenges she encountered while translating Gombrowicz’s novels. Borchardt’s account blends translation theory and memoir as she confronts generic questions of style and authenticity with necessarily personal approaches. Yale University Press is pleased to present, over the next few weeks, excerpts from Borchardt’s as yet unpublished memoir on translating Gombrowicz, beginning with her thoughts on Gombrowicz’s unusual language: a variation of Polish that resists description and lacks a straightforward English equivalent.

Since Trans-Atlantyk’s previous translation published fifteen years ago, I have been mulling over how I would translate it in order to convey Gombrowicz’s most unusual language that he chose for this novel. I focused first on its deviation from the literary to the colloquial language of the less educated folk (yes, their language is different both in Polish and in English) and of the Polish peasantry. So what would be the English equivalents, more or less? Cockney? No, this is an English dialect and not for American readers. One of the American dialects? No. It seemed I was being clever in this line of thinking but something seemed out of kilter. Why did the previous translators use words like “fain”, “perchance”, “ergo” over and over again? Their translation seemed somewhat pompous.

Finally, after several months of this, I decided to ask Jerzy Jarzębski, my colleague and the Gombrowicz scholar, for advice. As you will glean from what follows, had I written to him sooner, I would not have been so inane in my thinking.

Jarzębski responded, in essence, that this was no simple matter, that Gombrowicz used a variety of the Polish language from the turn of the 17th century. Moreover, he filtered it through the language of the Polish gentry’s gawęda from the beginning of the 19th century. He also used a lot of peasant language, rather archaic, modeled on that of the Polish peasants who had arrived in Argentina from Poland in the 19th and 20th centuries. Furthermore, there was also the language of the Polish romantic poet Adam Mickiewicz. “In a word: quite a mélange, but try and see what you can do,” Jarzębski said. Clearly, Gombrowicz’s most untranslatable work.

Thus I arrived at and accepted the notion of Gombrowicz’s archaic language.

A few words about the gawęda. Historically, the gawęda was a tale, a mode of interaction at social gatherings of the sixteenth- to nineteenth-century Sarmatian Polish nobility in their country manors. This was reflected in seventeenth-century Polish literature and has persisted in some twentieth-century writings, as well as in fireside social gatherings. I have been unable to find an equivalent to the gawęda style in American literature. In Gombrowicz’s gawęda, the narrator chats directly with his listeners. Spoken mostly in the past tense, the narrative often reverts—awkwardly to the English speaker’s ear—to the present tense, thus insinuating the narrator into the present and among his listeners.

Having recently, by a fluke of fate, picked up and read Moby-Dick, I was becoming convinced that this was one of the varieties of English applicable to the translation of Trans-Atlantyk. Another book, a much earlier of course, was Gulliver’s Travels, as well as Tristram Shandy. All three novels, even though baroque, read easily. These works were important from the point of view of the period when gawęda has thrived, and for my ability to reproduce a “quick-read” of Gombrowicz’s spoken tale.

I was learning a new language.

However, I did not entirely surrender to the archaic because Gombrowicz did not throw contemporary language totally to the winds. I recalled the gawędas from my early adolescent years—campfire chats during my girl-scouting days, or rather evenings. This was well into the 20th century.

For further guidance into the language, I went to the author himself, who had written to his friend Dominique de Roux:

“This Trans-Atlantyk always makes me laugh… It frolics without restraint, it is sclerotic, absurd, in the gawęda-style from one hundred years ago but mixed with another class of words, often with words invented by me.”

“Sclerotic” also referred to the way Gombrowicz used language. I read a critique of the previous translation by Jerzy Jarniewicz, the Polish poet and critic, published in a literary journal. The message I, the translator, gleaned from it was to forgo any fancy rendition of the Polish into English (except where Gombrowicz’s inventions make it necessary), and to adhere to his well-worn expressions and idioms, as yet another manifestation of that “sclerosis.”

In order to convey the archaic language appropriate to the gawęda, Gombrowicz used expressions and rhetorical devices typical of eighteenth- and nineteenth-century Polish. For example, he sometimes reversed expected sentence order, moving the verb to the end of a clause. He also mimicked the use of uppercase letters common in earlier texts (in English as well). He also employed archaic orthography, spelling też as tyż (meaning “also”), in the older Polish style.

It is interesting to note that the Polish peasant language has retained some archaic forms that Gombrowicz used; many of these are of course untranslatable. Also, going to his eastern Poland roots (Kresy or Borderlands), Gombrowicz used some forms of language still typical of those regions.

The translation needed to convey, by the use of colloquialisms, an informal mode. It must flow quickly, easily. Yet it also needed to preserve the author’s use of repetition. However when the use of synonyms was appropriate I used what my OED denoted as Middle or Old English. My task was also to simulate as effectively as possible the beautiful lyrical passages that elevated the narrator’s spoken tale into a written work of art.