In “Hawthorn Blossom,” the Brothers Grimm rewriting of the folk story Sleeping Beauty, a queen is informed by a frog that the royal couple finally will have a child. Among the guests at the celebration of the princess’s birth are twelve “wise women” (the sort of traditional village healers accused of witchcraft in Germany during the 1600s and burned alive at the stake). Because the palace has only twelve golden plates the kingdom’s thirteenth wise woman is not invited. Insulted, she puts a curse on the princess.

In her fifteenth year the maiden will prick her finger with a spindle and die. The curse can’t be lifted, but one of the other healers modifies it. Instead of dying, the princess and the entire palace fall into a hundred-year slumber. An impenetrable hawthorn hedge grows up around the castle, completely obscuring it. Over the decades many suitors try to penetrate this living wall, but all are impaled by thorns, and die agonizing deaths. On the last day of the century another prince approaches the hedge. This time the branches burst into a riot of white blossoms, and part to let Mr. Right inside. The prince finds the awakening maiden, kisses her, and they presumably live happily ever after.

The symbolism in this tale is not opaque. The hedge represents her hymen, the white blossoms her virginity. The odor of sex emitted by blossoming hawthorns signals that her purity will soon be a thing of the past.

Besides sex and death, Sleeping Beauty is also informed by contemporary realities and ancient beliefs about the powers of the hawthorn tree. Beginning in the late Middle Ages, dense thorny hedges were increasingly cultivated throughout Europe to keep the peasantry off land that had traditionally been used in common by serfs and nobles alike. In Ireland, at the time the story was published in 1812, these enclosures were particularly reviled, although lone hawthorns on the island were considered the home of faeries, and thus enchanted.

The hawthorn was a potent symbol in pre-Christian Europe—appealed to for good fortune, feared if harmed, and burned on funeral pyres to help waft the soul toward heaven—and later, the Church appropriated boughs of the Mayflower’s delicate white petals as devotional icons displayed during that month’s observances of the Cult of the Virgin. Many of the supernatural appearances of Mary reported by the faithful over the centuries—the so-called Marian Apparitions—place her under a hawthorn tree or perched on one of its branches.

Because the genus Crataegus has no known psychoactive properties (although it offers clinically proven efficacy in the treatment of some cardiovascular diseases, such as congestive heart failure), it is difficult for modern people to understand the gravity with which our forebears regarded the tree. While the blossoming hawthorn was a paradoxical representation of both purity and fertility in Teutonic and Romance cultures, in the Balkans it became part of the cult of the undead. For example, during the early 1880s in the Slovakian village of Tomišelj, people reported strange visits from a prominent man who had died. His wife claimed he stole into her bed at night, and his neighbors said they often saw him sitting on a rock. The village priest and a parishioner dug up the man’s grave and determined that he was a vampire. They drove a stake made of hawthorn through his heart, and covered his grave. Although he was never seen again, his widow, who gave birth to the vampire’s child, went insane with fear and sadness.  In 1882, fearless vampire hunters in Varna, Bulgaria, opened the grave of an undead person suspected of causing an outbreak of disease. The corpse was full of fresh blood. They thrust a thorn from the tree into its breast. Then, for good measure, they cremated the body on a pyre of hawthorn branches. And apparently, one couldn’t just impale the undead with any old hawthorn. According to an instructional manual called South Slavic Countermeasures Against Vampires, “The hawthorn must have been grown in the high mountains in a place from which the bush could not have seen the sea.” Since it was thought that vampires are allergic to the thorns of hawthorns, because of their association with the Crown of Thorns, in Eastern Serbia a small hawthorn peg driven into the grave next to a cross was thought to prevent the dearly departed from turning into a vampire. It was believed that tossing hawthorns on a grave would prevent the dead, whether a vampire or not, from taking revenge on the living.

Faith in the unseen force of hawthorns appears in cultures across the range of the genus in the Northern Hemisphere. For example the Iroquois, who practiced witchcraft, fashioned a sort of hawthorn voodoo doll used to put a hex on an enemy, making him “break out like cancer,” according to one oral history. This was most commonly a hawthorn root carved to resemble the victim, or some non-hawthorn material such as corn husks fashioned into a doll filled with thorns or pierced with them. Conversely, to ward off such a spell, the victim countered hawthorn malevolence by drinking hawthorn tea.

Like those in the tales adapted by the Brothers Grimm, J. K. Rowling’s trees live in the natural world but do supernatural things. Harry Potter’s first wand is made from holly embedded with the tail feather of a phoenix. After he wrests away the wand of the obnoxious Draco Malfoy during the skirmish at Malfoy Manor, it shifts its allegiance to Harry, demonstrating that wizards don’t choose wands, wands choose wizards. This wand is made from a strand of unicorn hair embedded in a ten-inch shaft of hawthorn wood. Rowling says that a wand made from hawthorn is good for the magic that heals, and it’s also adept at putting curses on people. But you have to be careful with it, she warns. In the hands of a dilettante its spells can backfire.

Bill Vaughn writes for many publications about topics ranging from sports to the paper industry, fashion to Jesse James. Also a graphic artist, he has designed and composed more than 400 books. He lives outside Missoula, MT, with his wife, dogs, and horses. 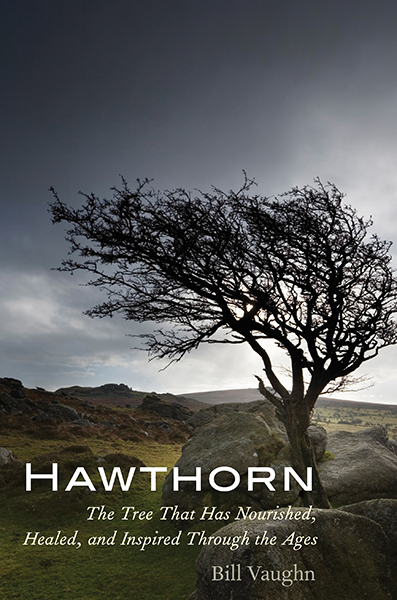 Featured Image: Hawthorn Flowers by allispossible.org.uk via Flickr under a Creative Commons license