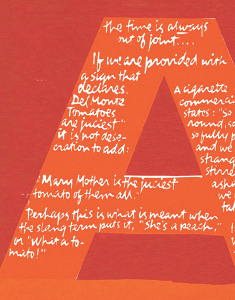 Corita Kent and the Language of Pop is an exhibition opening this Thursday, September 3rd, at the Harvard Art Museums.  The Boston Globe recently published a piece in which Cate McQuaid whimsically proposes that if Don Draper and Mother Teresa had a love child, it would be Corita Kent.  The exhibition aims to elevate awareness of the American artist, who mixed spiritual, pop cultural, literary, and political writings with symbols of consumer culture and modern life and in doing so created bold, memorable images in the 1960s.  The handsomely illustrated book, edited by Susan Dackerman and with essays by Dackerman, Julia Bryan-Wilson, Richard Meyer, and Jennifer L. Roberts, which accompanies the exhibition, highlights how Kent’s work both questioned and expanded the boundaries of pop art.

Much of pop art seems to rely on replicating the characteristics of the material culture it gleans from, lifting not only the imagery but the strategies employed in product advertising, branding, and other commercial forms of representation. The repetition, directness, subtle wit, as well as the overwhelming tedium, are all mirrored in this shift from the everyday world to the work of art. This is one of the great revelations of pop art and indeed of all modern art in the wake of Duchamp’s readymades, which allows for the most ordinary objects to be extricated from their familiar positions in the world as they are selected and isolated in an altogether different context. That same fundamental source material, however, vulnerable to the wayward tendencies of language and the ease with which words may be subverted and obfuscated, has the potential to be wholly reimagined as something entirely distinct from its superficial origins. Rather than a simple repurposing–a parallel move–these things might occasion a resurrection, an opportunity to invest the inexpressive with an unprecedented and spirited joy.

Though her proximity to the pop art movement is aptly founded on her recycling of the ubiquitous manifestations of contemporary culture, the work of Corita Kent bears a distinctive intentionality, employing those artifacts as malleable materials, to be compounded and subsumed into a more articulate identity rather than stripped bare of commentary altogether. “Words have life and must be cared for,” she once said, and her work explores the notion that the more pervasive the imagery and language, the more capable it is of acting as a linguistic blank slate, and thus of being transformed from a slogan into a celebratory proclamation. Looking at the wide range of sources she excerpted and culled from, it’s evident that, although she undoubtedly held all words to be sacred, Kent had little regard for the contrived purpose of things, seeing language and imagery, if not objectively, then at least as remaining continually open to reinterpretation and re-appropriation. And though Kent’s work is to be read in close relation to the drastic reforms taking place concurrently within the Catholic church, overall her work seems to expound a more generalized, egalitarian view of modernity. In juxtaposing seemingly mismatched kernels of speech from E.E. Cummings, General Mills, The Beatles, Del Monte, Martin Luther King Jr., Kierkegaard, among many others in a vast pool of theological, philosophical, literary, and commercial sources, she effectively engages in the reconciling of the secular and the non-secular that underlies the aims of the Second Vatican Council, while at the same time blurring the lines between the profound and the whimsical, the public and the private, and above all else, art and everyday life.

A Balinese saying that Kent adopted as a maxim for the classroom asserts, “We have no art; we do everything as well as we can.” This adequation is crucial to Kent’s perspective, as she recognized that the commonplace phrases one almost had to labor to adequately see while strolling through the aisles of the Market Basket grocery store were capable of acutely addressing the cultural shifts of a tumultuous era, while at the same time retaining a certain spiritual wisdom. Everything, for Kent, was to be considered grist for the mill, showing us that perhaps the most pervasive and therefore unremarkable of things may in fact harbor the deepest profundity. Through the uniquely poetic cast of her colorful screen prints, Kent conveyed a worldview that could stand almost entirely free of rhetoric outside of a fundamental humanism, expressly spiritual, though ultimately universal in its relevance.

More pop on the @rtbooks blog:

An excerpt from Thomas Crow’s The Long March of Pop