“Can modern man, in today’s society, still fall in love?”

This seems to me the central question in the work of Can Xue.  Granted, this might come as a surprise—that a writer who is so rigorously experimental and unapologetically demanding is obsessed with such a personal concern. But perhaps to understand “love” so narrowly is to misunderstand its place in Can Xue’s work.

The phrase, ‘fall in love’ is especially dynamic here, suggesting not only the descent into passion but a fall from grace. When Adam, in the book of Genesis, sated with Eve’s apple, hides in the bushes of the doomed Garden of Eden, it is God who cried out and said to him, “Where are you?” God is lonely. Adam, a man, is a boy: hiding. He will never be anything but. His suffering is avoidance of suffering: not knowing. He is a constant disappointment. His suffering is pleasure; he can’t have his apple and eat it.  Adam thus invented the self when he invented deceit; he set the tone of our personal narratives as quests to avoid suffering—and the terrible and consistent truth of our failure to do so. The self, then, is the place Adam lives and where he takes refuge from experience. His only hope for redemption, then, is a fall from the self into the refuge of another.

In Can Xue’s novel, The Last Lover, the characters don’t fall so much as they propel themselves into love. While no less desperate than those capitulating to desire, these would-be lovers catapult forward. Whether or not their seductions are successful is immaterial; Can Xue challenges us to realize ourselves in the sheer effort of loving, in keeping in front of its satisfaction and behind its call.

I am privileged to be the English language publisher of Can Xue’s two novels, Five Spice Street and The Last Lover, which is situated in an unnamed, fictional Western country, a bit like Kafka’s “amerika.”  City B of Country A.  Universal in scope, the book has the opposite impact of the international or globalized novel. Though its many characters come from different countries, they feel unspecific, outside national borders, de-tribalized.  Here, in the heightened prose of this novel, cultural identity would seem trite—as would any sense of an overdetermined psychology. We are each of us merely a system of desires, a microcosm of the global village, atomic impulses that feel like our entire being but are subsumed within a greater process.

To say that the novel dives into the interior lives of its characters falsely credentials their existence. Can Xue sets out to show how these lives are impossible to manage, to control. She seeks a more intransitive relationship to the soul: to free oneself, to unburden: to lighten as well as enlighten.

Joe, the manager of a clothing company, reads with a voraciousness that consumes the reality around him. Joe fails to distinguish between the world around him and the reality within his books. In a way, Joe is the author’s challenge to us to read as wildly and deeply.

His wife Maria weaves tapestries and conducts mystical experiments with household cats and rose bushes. Reagan, who has sued Joe for making clothes blamed for the recent drowning of rubber factory workers, has an affair with Ida, a refugee from a country that has disappeared because of recent landslides. Vincent, a competitive clothing company owner, chases a woman in black who keeps disappearing.

Earthquakes, mudslides, infestations, outbreaks:  the chaos of the world is anchored only by the precision with which it is written.  Surface reality is constantly subverted but to call her narrative “non-linear” is too simple; it requires the reader’s belief in straight lines to begin with.

About this book Can Xue writes: “In the world I strove to create, the sun is a great burning flame, the character’s actions exceed our anticipation and each one of them drives death away with a singular performance.  They are all moving toward the extreme end of the path to their own ideals.” Reading Can Xue about her fiction is a profoundly different experience than reading her actual fiction; it feels more like the way a philosopher might think about her work: systematic, self-reflexive, threatening itself toward a closed system.

Nor is it adequate to call her aesthetic surreal; even as the landscape is un-mappable it is readily familiar. Even as the storyline is rooted in a kind of gossip we mustn’t trust the teller. The ways in which we know each other, while perhaps comfortable, are unreliable.

Others have compared her work to a dream; but how does one separate the dreamer from the dream? Reading Can Xue I don’t feel as if I were dreaming because there is no way that I am asleep.  If anything, I’ve become hyper-awake, hyper-aware.  It’s rather as if reality had been exposed as a dream.

Can Xue herself has claimed that her work is as much philosophy as fiction; her fictional world is subject to the extreme rigors of logic. And yet her readers must be sensitive to the way that life feels in the living, the sensuality of the flow of existence. In between these classical philosophical modes of thought—rationalism vs. empiricism—lies Can Xue’s posture of being, a kind of spiritual balancing of the two Western binary modes of understanding the self.

And while, so far, I have invoked Western (in fact, ancient Greek) philosophy, there is no mistaking Can Xue’s work as anything but Chinese. Can Xue adapts Chinese materiality, the love of physical things, and marries it with the abstractions of western philosophy. Let us look at the opening of the Chinese classic, the I Ching.  This opening is related to music, spoken song, a drawn line, a thing of beauty unbothered by syntax. Let us read the first line:

This first sentence does not construct a reality but simply abuts its elements, traces a curve, describes a simple start, a continuous process of transformation.  Here, neither God nor Being are necessary, neither myth nor theology serve us as well as story will.  There is nothing to do but enter the way of thought.

Embrace the idea of the threshold, that text exhorts us.  Step beyond the enclosure of our thinking, beyond our givens.  Step back in order to bring perspective closer.

Images from the Can Xue International Academic Symposium

Among the literary translation “boomlet” in recent years, Chinese writers still figure rarely – especially female Chinese authors.  Our wonderful translator Annelise Finnegan Wasmoen has marveled with this version.  Can Xue herself put the challenge of translating between the languages as: “Chinese is abstract, concise and veiled.  English is clear, fluid and direct.”

I first met Can Xue in Beijing nearly a decade ago.  We ate in a hotel restaurant that was high concept in design; I could tell she was vaguely suspicious of it.  I have no Chinese and her English was “halting,” in her own words. I wondered how it would go. We sat down, ordered and before I knew it four hours had passed. We covered favorite authors: Kafka, Calvino, Borges, Musil, Nietzsche, Plato, Kant. About her writing habits, she said she writes early in the morning in a single draft with very little editing. She smiles the whole time. Then she goes “for a punishing run, especially in the rain.” Then she reads the rest of the day.

We have kept up a pretty regular e-correspondence. She’s a remarkable and generous reader, sending me sentences that touch her. Recently, she read “The Man Without Qualities” and sent me these lines inspired by Robert Musil:

This is the right context in which to approach Can Xue.

On the surface, The Last Lover is a difficult novel; while it does have linear narratives and descriptive coherence, it is structured along a kind of vertical or anti-gravitational drive, escaping the gravitational drive of rationalism.

Rather than difficult, we ought to read Can Xue’s challenge as generous. Can Xue expects much of her reader; we are her co-conspirators, her collaborators, her cohabitants, her co-creators.  Reading her is to meet her halfway in the bridge she has created between our consciousnesses, our souls. She is an essentialist who believes that contact between souls is possible.

This is what Can Xue means by “love”.

Can Xue, pseudonym of Deng Xiaohua, is the author of many novels, volumes of literary criticism, and short works of fiction. Formerly a tailor, she began writing fiction in 1983. The Last Lover is her second novel to appear in English. She lives in Beijing.

John Donatich is the director of Yale University Press and the founding editor of the Margellos World Republic of Letters translation series. This essay appeared in a different form in “Music and Literature” and was delivered as they keynote speech to the Can Xue International Academic Symposium in September, 2015.  It will appear as an afterword to the new Chinese edition of The Last Lover. 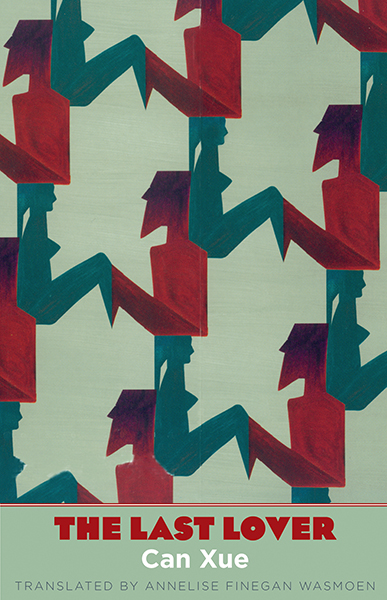