“A photograph that deals with the real world but at the same time seeks to free itself of it.” – Irving Penn, unpublished note, about 2007 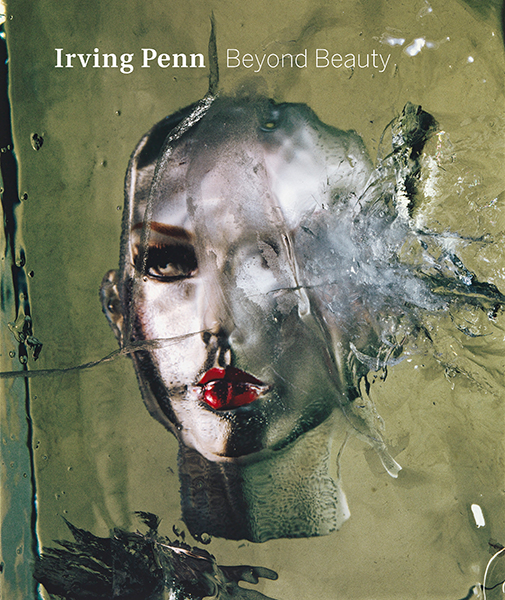 A disembodied gray head with bright red lips, floating in a field of cracked green decorates the cover of Irving Penn: Beyond Beauty, the book commemorating the photographer’s new exhibition at the Smithsonian. At first it it seems to be a painting, perhaps, or a photo manipulation, but the title, Head In Ice (2002), forces the viewer to pause and reevaluate. The head is strange and gray because it is a mannequin, the image rippled and cracked because of defects in the ice itself. It’s at once a portrait and a still life. Deeply intriguing, beautiful and unsettling.

Many of Penn’s images fall into this place between the beautiful and the bizarre. Born in 1917, he had an astounding technical foundation which served him for almost 70 years of photographic practice. Over more than half a century Penn experimented with a variety of styles and subjects, always carefully maintaining a balance between the beautifully luxurious and the challenging, like making contact platinum prints of street trash such as cigarette butts. Deep black and white portraits so close up as to be almost abstract, of literal garbage.

In his fashion and editorial work Penn would work to contruct visual interest. Celebrities – dancers, actors, writers, designers – were posed against painted cloths, and positioned on crumpled gray blocks of carpet. Often, especially in the 1950s, slivers of his industrial studio would be visible around the edges, scaffolding, ladders, dirt and corners, adding complication. Penn also had a sense of humor, tweaking what otherwise might have been straight, traditional portraits: Truman Capote stands hunched in an overcoat on a chair in a narrow corner, fashion designer Charles James lays on the floor, dwarfed by an upright dress form wearing one of his won creations.

He refused to allow his images to be simply glamorous. His work was challenging. Beautiful men and women against industrial scenery, classically composed still lives with a single carefully placed ant crawling across the cheese, or the pitcher spilled onto a broken porcelain dish. This exhibition and book demonstrate that Penn’s perfectly imperfect style, and his still lives especially, was an assertion that “Beauty is ultimately not a complete compensation for death.”