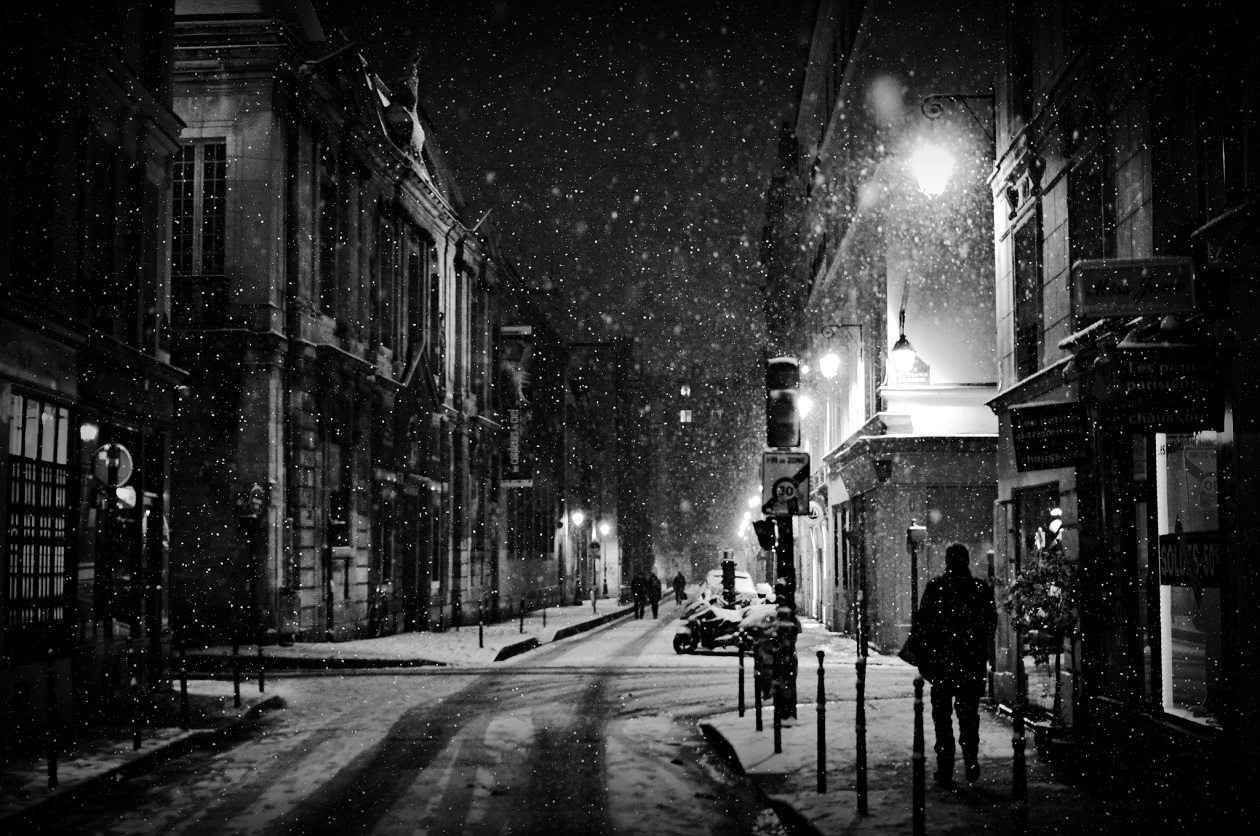 Snowing in Paris by Jerry Van Krasten via flickr

Late at night, a long time ago, when I was about to turn twenty-one, I was crossing Place des Pyramides on my way to Place de la Concorde when a car appeared suddenly from out of the darkness. At first I thought it had just grazed me, then I felt a sharp pain from my ankle to my knee. I fell onto the pavement. But I managed to get up again. The car swerved and collided with one of the arcades surrounding the square in a shower of broken glass. The door opened and a woman stumbled out. A man who happened to be at the entrance of the hotel under the arcade ushered us into the lobby. We waited, the woman and I, on a red leather sofa while the man made a phone call from reception. She was cut along the hollow of her cheek, on her cheekbone and on her forehead, and the cuts were bleeding. A huge man with short brown hair came into the lobby and walked towards us.

Outside, they surrounded the car, which stood with its doors hanging open, and one of them took notes as if for a report. As we got into the police van, I realised that I was missing my left shoe. The woman and I were sitting side by side on the wooden bench. The huge brown-haired man sat on the bench opposite us. He was smoking and glanced at us coldly from time to time. Through the barred windows I could see that we were driving along Quai des Tuileries. I hadn’t been given time to collect my shoe, and I thought about how it would stay there, all night, in the middle of the pavement. I could no longer tell whether I’d lost a shoe or an animal, the dog from my childhood that had been run over when I lived on the outskirts of Paris, Rue DocteurKurzenne. Everything was getting muddled in my mind. Perhaps I hit my head when I fell. I turned to the woman. I was surprised she was wearing a fur coat.

I remembered that it was winter. And the man opposite was wearing a coat, too, and I was wearing one of those old sheepskin jackets you find at flea markets. Her fur coat was certainly not one you would find at a flea market. A mink? A sable? She was smartly dressed and well groomed, which contrasted with the cuts on her face. On my jacket, just above the pockets, I noticed spots of blood. I had a large graze on my left palm; the spots of blood on the fabric must have come from there. She held herself erect but with her head tilted to one side, as if staring at something on the floor. My shoeless foot, perhaps. She had shoulder-length hair and in the light of the lobby she seemed blonde.

The police van stopped at a red light on the quay, level with Saint-Germain-l’Auxerrois. The man continued to watch us in silence, one at a time, with his cold stare. I couldn’t help but feel guilty of something.

We were still stopped at the lights. The café on the corner of the quay and Place Saint-Germain-l’Auxerrois, where I had often met my father, was still open. It was time to escape. Perhaps all we had to do was ask the guy on the bench to let us go. But I felt incapable of uttering a single word. He coughed, a chesty smoker’s cough, and I was startled at the sound. Since the accident, a profound silence had settled around me, as if I had lost my hearing. We continued along the quay. As the police van headed over the bridge, I felt her hand squeeze my wrist. She smiled, as if she wanted to reassure me, but I wasn’t frightened at all. It even seemed to me that we had been in each other’s company before, at another time, and that she still had the same smile. Where had I seen her? She reminded me of someone I had known a long time ago. The man opposite us had fallen asleep and his head had dropped onto his chest. She squeezed my wrist hard, and I was convinced that soon after, once we were out of the van, they would handcuff us to each other.

After the bridge, the van went through an entranceway and stopped in the courtyard of the Hôtel-Dieu casualty department. We sat in the waiting room, still accompanied by the man. I was beginning to wonder exactly what his job was. A policeman in charge of keeping an eye on us? But why? I wanted to ask him, but I already knew he wouldn’t be able to hear me. I had LOST MY VOICE. The three words came into my mind in the stark light of the waiting room. The woman and I were sitting on a bench opposite the reception desk. The man went to talk to one of the women there. I was sitting very close to her; I could feel her shoulder against mine. He sat back down in the same place on the edge of the bench, along from us. A red-haired man, barefoot, dressed in a leather jacket and pyjama trousers, paced up and down the waiting room, shouting across at the women at reception. He complained that they weren’t paying him any attention. He kept walking in front of us, trying to catch my eye. But I kept my eyes averted because I was afraid he would talk to me. One of the women from reception went over to him and gently guided him towards the exit. He came back into the waiting room, but this time he launched into a tirade of complaints, like a howling dog.

From time to time, a man or a woman escorted by officers would cross the room quickly and disappear into the corridor opposite us. I wondered where the corridor led to, and if, when our turn came, we would be steered down there, too. Two women crossed the waiting room, surrounded by several police officers. I could tell that they had just come out of a police van, perhaps the same as the one that dropped us off. They were wearing fur coats, just as elegant as the one worn by the woman sitting next to me, and, like her, they were smartly turned out. No cuts on their faces. But each handcuffed at the wrists.

The huge brown-haired man motioned for us to get up and took us to the end of the room. Walking with one shoe was uncomfortable and I wondered if it wouldn’t be better to take it off. I felt quite a sharp pain in the ankle of the foot without a shoe.

A nurse led us into a small room with two camp beds. We lay down. A young man came in. He wore a white coat and had a jawline beard. He checked his papers and asked the woman her name. She replied: Jacqueline Beausergent. He asked me for my name, too. He examined my shoeless foot, then my leg, lifting my trousers up to the knee. The nurse helped her out of her coat and cleaned the cuts on her face with cotton wool. Then they switched on a night-light, and left us. The door was wide open and, in the light of the corridor, our man paced up and down. He appeared in the doorway with the regularity of a metronome. She was lying there next to me, her fur coat pulled over her like a blanket. There wouldn’t have been room for a bedside table between the two beds. She reached her hand out and squeezed my wrist. I thought of the handcuffs that the two women were wearing earlier and again said to myself that they would end up putting them on us, too.

Out in the corridor, he stopped pacing. He was talking quietly with the nurse. She came into the room, followed by the young man with the jawline beard. They turned on the light and stood at the head of my bed. I turned to the woman and she shrugged under the fur coat, as if to tell me there was nothing we could do, we were trapped, the time to escape had passed. The huge brown-haired man stood motionless in the doorway, his legs slightly apart, his arms folded. He didn’t take his eyes off us. He must have been preparing to stop us in case we tried to escape. She smiled at me again, with that same wry smile she had in the police van earlier. I don’t know why, but this smile made me uneasy. The fellow with the jawline beard and white coat leaned over me and, with the nurse’s help, put a kind of big black muzzle over my mouth and nose. I smelled the ether before losing consciousness.

Excerpted from Paris Nocturne by Patrick Modiano, translated from the French by Phoebe Weston-Evans 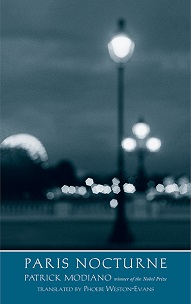 For more information on the Margellos World Republic of Letters, visit our website.