In the past year, Patrick Modiano has been hailed by American book critics for his Nobel Prize-winning literary art, rightly described as “elegant,” “haunting,” and “urbane.” In books such as Suspended Sentences, Paris Nocturne, and After the Circus, his immense gifts as a novelist—one who melds ambiguous autobiographical and impressionistic details into narratives filled with deft segues of time and perspective—are on fine display. Only once, however, has he published a book that can be fully termed a memoir, his brief and startling account of his youth, Pedigree.

Just as his novels are unlike anyone else’s, his memoir stands alone in its unconventional shape, tone, and pace, as it revisits the past with a brusque and candid urgency that somehow does not exclude eloquence and flashes of lyricism. To preserve its power, Mark Polizzotti, acclaimed for his translation of Suspended Sentences, has in Pedigree again transported the author’s distinctive style into English with uncanny fidelity.

In the passage below, Patrick Modiano recounts his early childhood memories. The accompanying photographs are from his private collection, and we thank him for giving us special permission to present them here.

On August 2, 1945, my father went by bike to register my birth at the town hall of Boulogne-Billancourt. I imagine him returning through the deserted streets of Auteuil and alongside the silent quays of that summer.

Then he decided we’d live in Mexico. The passports were ready. At the last minute, he changed his mind. He came this close to leaving Europe after the war. Thirty years later, he went to die in Switzerland, a neutral country. In the meantime, he moved around a lot: Canada, Guyana, Equatorial Africa, Colombia . . . He was searching for El Dorado, in vain. And I wonder whether he wasn’t also trying to flee the Occupation years. He never told me what he had felt, deep inside, in Paris during that period. Fear? The strange sensation of being hunted simply because someone had classified him as a specific type of prey, when he himself didn’t really know what he was? But one shouldn’t speak for others and I’ve always been reticent about breaking silences, even when they do you harm.

Nineteen forty-six. My parents were still living at 15 Quai de Conti, on the fourth and fifth floors. In 1947, my father would also rent the third floor. My father’s relative and rather fleeting prosperity lasted until that year, at which point he entered what they call “splendid poverty.” He worked with Giorgini-Schiff, with one M. Tessier, a citizen of Costa Rica, and with a baron Louis de la Rochette. He was the close friend of a certain Z., who was mixed up in the “wine scandal” of 1946. My maternal grandparents came to Paris from Antwerp to look after me. I spent all my time with them, and I spoke only Flemish. In 1947, on October 5, my brother, Rudy, was born.  Since the Liberation, my mother had been taking acting classes at the Vieux- Colombier school. In 1946 she landed a minor role in Auprès de ma blonde at the Théâtre de la Michodière. In 1949, she had a bit part in the film Rendezvous in July.

That summer of 1949, in Cap-d’Antibes and on the Côte Basque, she spent time with a playboy of Russian origin, Vladimir Rachevsky, and with the marquis d’A., a Basque who wrote poetry. That’s something I would learn later on. We stayed alone in Biarritz for nearly two years, my brother and I. We lived in a small apartment in the Casa Montalvo, and the woman who looked after us was the caretaker of that house. I don’t have a very clear memory of her face.

In September 1950, we were baptized at the church of Saint-Martin in Biarritz, without my parents being present. According to the baptism certificate, my godfather was a mysterious “Jean Minthe,” whom I didn’t know. In October 1950 I went to school for the first time, at Sainte-Marie de Biarritz, in the Casa Montalvo neighborhood.

One afternoon when school let out, there was no one waiting for me. I tried to go home on my own, but as I crossed the street I was knocked down by a van. The driver brought me back to the nuns, who placed an ether-soaked pad over my face to put me to sleep. Since then, I’ve been quite sensitive to the smell of ether. Overly sensitive. Ether has the curious ability to remind me of pain, then immediately erase it. Memory and amnesia.

We returned to Paris in 1951. One Sunday afternoon I was in the wings of the Théâtre Montparnasse, where my mother was playing a small part in Le Complexe de Philémon. My mother was onstage. I got scared and started to cry. Suzanne Flon, who was also in the cast, gave me a postcard to quiet me down.

The apartment on the Quai de Conti. On the third floor, in the evening, we heard voices and bursts of laughter from the room next to ours, where my mother entertained her friends from Saint-Germain-des-Prés. I seldom saw her. I can’t recall a single act of genuine warmth or protectiveness from her. I was always on my guard around her. Her sudden flares of temper upset me deeply, and since I went to catechism, I prayed for God to forgive her. The fourth floor was where my father had his office. He was often there with two or three others. They sat in armchairs or on the arms of the sofa, talking among themselves. They took turns making phone calls. And they tossed the receiver back and forth to each other, like a rugby ball. Now and then, my father would hire young girls, students at the Beaux-Arts, to look after us. He had them answer the phone and say he “wasn’t there.” He dictated his letters to them.

At the start of 1952, my mother handed us over to a friend, Suzanne Bouquerau, who lived in a house at 38 Rue du Docteur-Kurzenne, in Jouy-en-Josas. I attended the Jeanne-d’Arc school at the end of the street, and after that the local public school. My brother and I were choirboys at midnight Mass in 1952, in the village church. First readings: The Last of the Mohicans, which I found incomprehensible but read all the way to the end. The Jungle Book. Andersen’s fairy tales illustrated by Adrienne Ségur. Aymé’s The Wonderful Farm.

Strange women came and went at 38 rue du Docteur-Kurzenne, among them Zina Rachevsky; Suzanne Baulé, known as Frede, the manager of Carroll’s, a nightspot on Rue de Ponthieu; and a certain Rose-Marie Krawell, owner of a hotel on Rue du Vieux-Colombier, who drove an American car. They wore men’s jackets and shoes, and Frede wore a tie. We played with Frede’s nephew.

From time to time, my father would come visit us accompanied by his friends and a sweet young blonde, Nathalie, an airline stewardess he’d met on one of his trips to Brazzaville. On Thursday afternoons, we listened to children’s programs on the radio. On other days, I sometimes heard the news broadcasts. The announcer was reporting the trial of those who had committed the MASSACRE AT ORADOUR. The sound of those words freezes my blood, today as much as it did back then, when I didn’t really understand what they meant.

One evening, during one of his visits, my father was sitting across from me in the living room of the house on Rue du Docteur-Kurzenne, near the bow window. He asked what I wanted to do with my life. I didn’t know what to answer.

One morning in February 1953, my father came to collect us, my brother and me, in the empty house, and drove us back to Paris. Later, I learned that Suzanne Bouquerau had been arrested for burglary. Between Jouy-en-Josas and Paris, the mystery of those suburbs that weren’t yet suburbs. The ruined chateau and, in front of it, the tall grass in the meadow where we flew our kite. The woods at Les Metz. And the large wheel of the water mill in Marly, which spun with the noise and coolness of a waterfall.

From 1953 to 1956 we lived in Paris, and my brother and I attended the local school on Rue du Pont-de-Lodi. We also took catechism at the church of Saint-Germain- des-Prés. We often saw Father Pachaud, who officiated at Saint-Germain-des-Prés and lived in a studio on Rue Bonaparte. I found a letter that Father Pachaud wrote to me at the time. “Monday, July  18. I imagine you must be building sandcastles on the beach. . . . When the tide comes in, the best you can do is run for it! It’s like when the whistle blows at the end of recess in the schoolyard of Pont-de-Lodi! Did you know it’s very hot in Paris right now? Luckily we get storms from time to time that cool down the temperature. If Catechism were still ongoing, you’d be pouring your schoolmates endless glasses of peppermint water from the white pitcher. Don’t forget that a month from now, on August 15th, it will be the Feast of the Assumption. You must take Holy Communion on that day to gladden the heart of your celestial mother, the Blessed Virgin. She will be pleased with her Patrick if you work hard to make her happy. You know that even on holiday, one mustn’t forget to thank the Good Lord for all the wonderful times he gives us. Goodbye, my little Patrick. I embrace you with all my heart, Father Pachaud.” The catechism classes were held on the top floor of a decrepit building at 4 Rue de l’Abbaye—which today contains opulent apartments—and in a meeting hall on Place de Furstenberg that has since become a luxury boutique. The faces have changed. I no longer recognize the neighborhood of my childhood, as Jacques Prévert or Father Pachaud would no longer recognize it.

On the other bank of the Seine were the mysteries of the Louvre courtyard, the two squares of the Carrousel, and the Tuileries, where my brother and I spent long afternoons. Black stone and leaves from the chestnut trees in the sun. The theater of greenery. The mountain of dead foliage against the foundation wall of the terrace under the Jeu de Paume. We assigned numbers to the alleyways. The empty fountain. The statue of Cain and Abel in one of the two bygone Carrousel squares. And the statue of La Fayette in the other square. The bronze lion in the Carrousel gardens. The green pair of scales against the wall of the Terrasse du Bord de l’Eau. The ceramic and coolness of the “lavatory” underneath the Terrasse des Feuillants. The groundskeepers. The rumble of the lawnmower engine, one sunny morning, on the grass near the fountain. The clock at the southern gate of the palace, its hands stopped for all eternity. And the fleur de lys branded on Milady’s shoulder. We drew up family trees, my brother and I, and strained to establish a lineage between Saint Louis and Henry IV. At age eight, I was deeply impressed by a film: The Greatest Show on Earth. One scene in particular: At night, the train full of circus performers slams to a halt, blocked by an American car. Reflections of moonlight. The Médrano Circus. The orchestra played between acts. The clowns, Rhum, Alex, and Drena. Street carnivals. The one in Versailles, with bumper cars painted mauve, yellow, green, navy blue, pink . . . The street fair at Invalides with Jonas the Whale. Garages, their smell of shadows and gasoline. Penumbra. Sounds and voices faded into echoes.

From Pedigree: A Memoir by Patrick Modiano, translated from the French by Mark Polizzotti, published by Yale University Press in the Margellos World Republic of Letters series in 2015. Reproduced by permission. 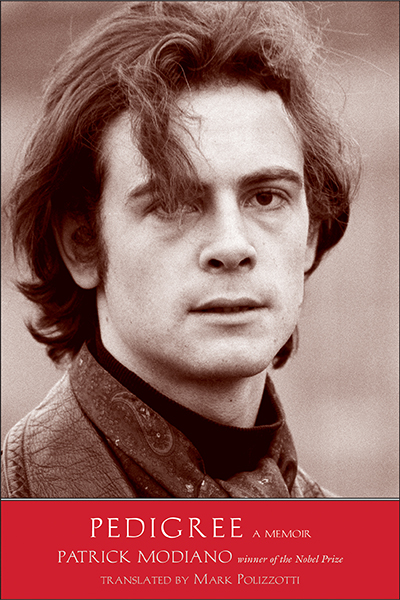