When you ask people why they steal music, or why they don’t care about the collapse of the record industry, the more informed ones talk about the decadence of the labels themselves. Lowery, who teaches a course on the economics of music at the University of Georgia’s business school, describes his students’ point of view this way: “It’s OK not to pay for music because record companies rip off artists and do not pay artists anything.” Nonsense, he says—some deals were unfair, but most allowed musicians to earn a living making music. As bad and wasteful as the labels could be, he’s essentially right about this, and our new model, with its mix of iTunes and streaming and piracy, is no improvement.

But part of the blame for the state of affairs that White and Lowery are arguing over goes to the record industry itself, which slept as technology changed, then responded with lawsuits against Napster and collegiate downloaders rather than finding a way to accommodate new appetites and new capacities. We’re back to the SUV in San Mateo. “The labels were the ones faced with this fork in the road,” said Steve Knopper, a Rolling Stone contributor and author of Appetite for Self-Destruction, perhaps the best book about the record industry’s suicide. “Come up with a new model, or ride CDs down into the ground. People on their own staffs were telling them, ‘Do something with Napster, make a deal with them.’ The labels, from top to bottom, said, ‘We are going to rely on our CD-selling model, screw all these punk Napster people.’ ” And the real damage, he believes, was done in just a few years: from the emergence of Napster, in 1999, to 2003, when the iTunes store opened. “There was almost no legal way in that period, anywhere in the world, where someone could buy a download. That four-year period killed the labels. They had a deal on the table with Napster, but that deal collapsed. The majority of the people running the labels said, ‘Screw this Internet stuff, we sell CDs. We’re big, they’re small.’ ” Part of what made labels vulnerable was the insularity of their leadership. “You had to prove that you went to clubs, had ‘cred,’ had worked with Elvis, that you had solid-gold ears, that you could hear a hit when no one else could.” Not exactly the type given to thoughtful restructuring in the face of technological innovation.

The record industry was not alone. It resembled, for instance, the newspapers that covered it, as media companies allowed themselves to be upended by Craigslist and actually paid—thanks to the advocacy of starry-eyed futurists—to transfer content to the Web, where ad rates dropped tenfold. For a long time, the model for record labels and newspapers alike involved giving away something for a larger gain. With newspapers, said Knopper, “You’d sell your content incredibly cheap—like for 25 cents—but you’d also sell advertising. For decades, in music, the model has been, you listen to the music for free on the radio, and then it becomes, ‘Oh, I love the single, I’ll buy an expensive record or CD.’ ”

The anger and frustration, and plummeting revenues, we hear from musicians—and the disintegration of almost $10 billion in revenue each year—is the sound of what happens when the world changes and the leadership sleeps through it. Someone is making a lot of money from music, but it’s not the labels. It’s the tech companies. So with the music industry dropping the ball, is it fair to beat up on the musicians? Of course not, and that’s why Lowery’s argument resonates. Most of our pop images of musicians—whether Led Zeppelin trashing hotel rooms, Ozzy Osbourne in his Beverly Hills mansion, or hip-hoppers with Bentleys, bling, and bottles of Chivas—involve sudden wealth leading to profligate irresponsibility. In MTV’s Cribs, musicians drive around in Ferraris; in rock biographies, touring is mostly about deflowering groupies and crashing Cadillacs into swimming pools. Rock music—unlike the folk and blues it came from—has always been aspirational and its rebel stance has often translated into materialism and narcissism. Elvis walked into Sun Studios a bashful truck driver, so shy he paced around the block several times before coming in; a few years later he was in front of the movie cameras wearing a gold lamé suit. Presley was not the last to travel this road.

But rock ’n’ roll fantasy aside, the vast majority of musicians in any genre are working hard just to get by, and touring almost constantly for shrinking yields. The Internet has, with a few exceptions, not made things easier. And often a great deal worse.

Lowery, a former quant, or quantitative analyst, writes, “Of the 75,000 albums released in 2010 only … 1,000 sold more than 10,000 copies … the point where independent artists begin to go into the black on professional album production, marketing and promotion.” That means the other 74,000 either broke even or lost money. It’s the kind of thing you don’t hear from Internet utopians who crow about the “democratization” the Web encourages and the way digital technology keeps us all “connected.”

Here’s what this kind of democratization actually means: “According to Nielsen,” wrote Eduardo Porter of the New York Times, “75,300 albums were released in 2010, 25 percent more than in 2005. But new releases that sold more than 1,000 copies fell to about 4,700 from 8,000 during that time.” That’s selling more than just 1,000 copies. If, continued Porter, “professional musicians, movie directors and writers can’t make money from their art, they will probably make less of it. Independent producers say piracy is already making it harder to raise money for small and mid-budget movies. Stopping piracy is about protecting creativity—and the many occupations it supports (think pop band or sound mixer). If we value what creative industries produce as much as we say we do, Congress will have to find a way to protect it without limiting speech.”

Is there a way to make government regulations that satisfy Lowery, who wants artists to get paid for their intellectual property, and White, who insists on “the ability to listen to what I want, when I want, and how I want it”? Probably. It may take a few more public arguments—some perhaps less polite than this one—to get there.

Scott Timberg writes on music and culture and contributes to Salon and the New York Times. He runs ArtsJournal’s Culture Crash blog and lives in Los Angeles. 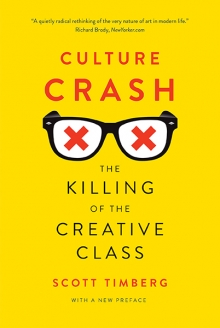