It has always been hard for outsiders to get their minds around classical Lacedaemon, or Sparta as it is more commonly called today. Even in antiquity—as a glance at Xenophon’s Regime of the Lacedaemonians, at Plato’s Republic and Laws, and at Aristotle’s Politics will make clear—the Spartans baffled and intrigued observers. It would not be hyperbole to appropriate for their polity and their way of life Winston Churchill’s famous description of Russia: Sparta was in the beginning and remains today a riddle wrapped in a mystery inside an enigma.

In later times, David Hume was among those who contemplated the puzzle; and, in the course of trying to sort out what it was that distinguished the ancients from the moderns, he had occasion to remark, “Ancient policy was violent, and contrary to the more natural and usual course of things. It is well known with what peculiar laws SPARTA was governed, and what a prodigy that republic is justly esteemed by every one, who has considered human nature as it has displayed itself in other nations, and other ages. Were the testimony of history less positive and circumstantial, such a government would appear a mere philosophical whim or fiction, and impossible ever to be reduced to practice.”

Hume’s contemporary and acquaintance Jean-Jacques Rousseau, though a man of a very different temper, was no less fascinated by Lacedaemon; and he made a brief stab at writing a history of the Spartans. In the preface, he, too, commented on the modern propensity for sheer disbelief, writing,

The greatest inconvenience associated with my endeavor is that here one sees men who resemble us almost in nothing, who seem to us to be outside of nature—perhaps as much because we are in that state ourselves as because they are in fact there. Their crimes inspire in us horror. Sometimes their virtues themselves make us shiver. Because we are weak and pusillanimous in good times and in bad, everything that bears a certain character of force and vigor seems to us impossible. The incredulity that we parade is the work of our cowardice rather than that of our reason.

Although Rousseau’s diatribe against bourgeois society and its denizens is apt to make us decidedly uncomfortable, there may, nonetheless, be something to his observation—for one of the distinguishing features of the scholarship published on the subject in the course of the last hundred years has been a propensity to succumb to incredulity.

François Ollier was the pioneer. In Le Mirage Spartiate, which he published in two volumes in 1933 and 1943, he set out to demonstrate that the ancient testimony really was a philosophical fiction. Eugène Napoleon Tigerstedt followed suit with another massive study—The Legend of Sparta in Classical Antiquity—which also appeared in two volumes in 1965 and 1974; and, although he corrected Ollier’s exaggerations, he concluded on a similar note. In the intervening years, a host of studies have appeared, calling into question whether we should credit the ancient testimony concerning one or another Spartan institution or practice. It has even been suggested that there was nothing special about Lacedaemon at all. It was, we are told, a pretty ordinary oligarchy.

There is this to be said for the skepticism that now reigns. The Spartans really were laconic. They were not inclined to talk about themselves—or, for that matter, anything else. And they kept their own counsel. They were, Herodotus tells us, notorious for saying one thing and doing another. Moreover, they were an exceedingly suspicious lot. They did not much go abroad, and they kept foreigners out. Thucydides, who was inquisitive, identified “secretiveness” as one of the defining characteristics of “the regime.” If there was an air of mystery about Lacedaemon, it was because the community’s citizens liked it that way. They realized that the best way to prevent outsiders from meddling in their business was to keep them ignorant.

In the end, however, as I discovered while engaging in the Quellenkritik necessary for tackling this subject, there was no way for the Spartans to hide. They could sally forth against the Persians and the Athenians without giving the game away. But they could not actually wrest an empire from Athens and manage it, as they did in the last stage of the Peloponnesian War and thereafter, without opening themselves up to the larger world. In the fifth century B. C., Herodotus managed to pierce the veil in some measure, as did Thucydides. But there was much that neither knew. Later, however, Socrates’ students Critias, who boasted of his admiration for Lacedaemon, and Xenophon, who acquired as his patron a Spartan king and who is said to have had his sons educated at Lacedaemon, became thoroughly familiar with the place; and they were by no means alone. Plato was well-informed, as was Aristotle—who, like Critias and Xenophon, penned a Regime of the Lacedaemonians. All of these, apart from Critias himself, lived long enough to be able to draw on a treatise on the subject written by an exiled Spartan king and on a response penned by a Lacedaemonian opponent not eligible for either of the two Spartan thrones.

Nor can it be said that all of those who wrote about Sparta were blind admirers. Critias was one such, to be sure. But the little that survives of his two works on Lacedaemon is informative, and even those who suppose that Sparta, as it appears in the ancient sources, is an imaginary polity acknowledge the accuracy of what survives from his account. Xenophon is generally taken as an admirer, but the recent scholarship suggests that what appears in the works of that writer as eulogy is more often than not an oblique and wry critique. Plato and Aristotle openly admired Lacedaemon’s singleminded focus on the formation and education of the community’s citizens. But they were harshly critical of that education’s aims and achievement. There is no reason to doubt the accuracy of the accounts provided by the students of Socrates and their peripatetic successor. If men of this intellectual stature were fascinated by Sparta, it was because that city’s regime and way of life was, in fact, worthy of wonder—and the same can be said for the mid-fourth century writer Ephorus of Cumae, who devoted considerable attention in his universal history to the rise of Lacedaemon and to its decline and who evidenced a decided preference for Athens.

Nor is there reason for supposing that Plutarch falsified the story. He lived hundreds of years after Lacedaemon’s collapse, to be sure, and he wrote moralizing biographies. But he was, in fact, a diligent and careful scholar, and he read nearly everything. He read, we know, the accounts penned by Aristotle’s pupils Theophrastus of Eresus and Dicaearchus of Messana; by his epitomator Heracleides of Lembus, a third-century adherent of the Lyceum; and by the Stoic Sphaerus of Borysthenes. But there is not a shred of evidence in favor of the view, now widely held, that any of these authors departed markedly from the story told and the analysis provided in Aristotle’s Regime of the Lacedaemonians and in Ephorus’ history (which Plutarch also read with exceedingly great care). Moreover, had the later peripatetics and their Stoic imitator painted a picture contrary to the one provided by Aristotle and Ephorus, Plutarch is not apt to have given them credence. The biographer from Chaeronea was astute. He could tell the difference between fawning eulogy and naked truth. If, like Xenophon, Plato, Aristotle, and Ephorus, he thought that, on balance, there was something admirable about Lacedaemon, it was because—monsters of a sort though the Spartans were—there was something about them that deserved respect and that was worthy of wonder and an inspiration for rumination.

The more closely that one examines the evidence, the clearer it becomes that the “Spartan mirage” presented in the scholarship of the last century is itself a mirage—a projection, as Rousseau anticipated, of the predilections and preferences fostered by bourgeois society and a reflection of our propensity to make of the past a morality tale supportive of our own way of life. If Lacedaemon is worthy of study today, it is as the opposite. For its example serves nicely as a corrective to our propensity for supposing ourselves the pinnacle of humanity. How well, we should ask, would we measure up if the Mede were to return? Would we fight? Or would we collaborate?

Paul A. Rahe is a Rhodes Scholar and the Charles O. Lee and Louise K. Lee Professor of History at Hillsdale College, and the author of numerous books including the three-volume Republics Ancient and Modern. He lives in Hillsdale, MI. 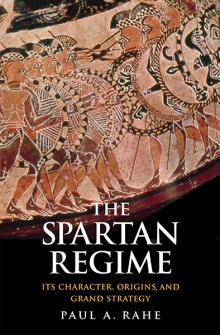