Today, we’re highlighting two works of contemporary Greek fiction published in English through our Margellos series: Thanassis Vatinos’s Orthokostá and Zyranna Zateli’s At Twilight They Return. First released in 1994 to a storm of controversy, Orthokostá defied standard interpretations of the Greek Civil War. Through the documentary-style testimonies of multiple narrators, among them the previously unheard voices of right-wing collaborationists, Valtinos provides a powerful, nuanced interpretation of events during the later years of Nazi occupation and the early stages of the nation’s Civil War. As a transforming work of literature, this book redefined established methods of fiction; as a work of revisionist history, it changed the way Greece understands its own past.

Zyranna Zateli’s ambitious, multigenerational saga is the story of Christoforos, who first weds Petroula, and then Eftha, followed, after her death, by Persa; of his sexually promiscuous son Hesychios and the many bastard children left on the doorstep following the untimely demise of so many would-be daughters-in-law; and of the sisters, brothers, children, and grandchildren who inhabit a household and a history expanding to near-bursting. Unique in structure, style, and narrative voice, Zateli’s novel, considered to be her masterpiece, combines classical mythology, ethnic folklore, and actual historical events with ingenious invention.

All day long the wind carried ashes down toward us. But it was quiet. In the evening we sat out in front of the house, and the men saw five people heading out from the Makrís property and going off. They went down a ways to a clearing, and they saw two of them going into the Koúros gorge, and the other three going up toward Masklinéki Vigla. The men came back, they said, Something’s up, we’re clearing out because they’re going to arrest us tonight. They’ll kill us. And they left right then and there. They told us women, Collect your things, get the animals out tomorrow, away from Koubíla, don’t leave anything behind. Because something’s up. They left, and we left in the morning, break of day. Me, the shepherds’ wives, and my sister-in-law, Yiórgos’s wife. Yiórgos the lawyer. She’d come there from Trípolis, they had Yiórgos in the detention camp, they’d arrested him. We gathered up the goats from Lákka. Tsioúlos’s widow was there, Lioú. She tried to catch some hens to take with her, she had a rooster, it got away from her. She says, Let’s not be too long, because the men told us to leave, I’ll come back and get it tonight. She went back that night, but the rooster wasn’t in the coop. They go out looking, she had her two eldest children with her, ten, eleven years old, they see feathers down on the threshing floor. Lioú says, That brute, he killed our rooster.

They burned down Ayiasofiá around harvest time. We were still in Koubíla. We didn’t go up there, how could we go there, but all night long we heard the crackling of the fire. And the smell of the smoke kept coming down to us, making us choke. We found out later that Anghelís Lambíris’s mother had stayed behind. The man with the blacksmith shop. The others had gotten out and gone across from there. The kapetanaíoi show up. Where is your son, where’s your son? She says, What do you want with him, dear man, an invalid with six children. He was missing an eye. Lost it in Albania. He knows how to hide, they say. They pressed her to say where he was but she wouldn’t tell. With the villagers watching from the distance. And as she stood there leaning up against the wall they shot her, and that’s how they found her. Standing, just as she’d been. She didn’t fall down. She was propped up on her cane, she was thin, she didn’t fall down. And they found her there dead.

From At Twilight They Return

“Is there any place in the world more beautiful than this?” Thomas asked his twin sister, slowly turning his head toward her and not hastening to avert his gaze as usual.

She spoke without hesitation—why? because quite simply she hadn’t seen any other place that she could have found better—but was also puzzled, catching her breath, since it wasn’t often that she saw her brother’s eyes, looked into his eyes, which she so wanted to do, but which he wouldn’t allow (her or anyone else), yet now he was almost making her do so…Without doubt, there were no other eyes in the world like his: the one brown, a golden brown, and the other bright green like an emerald—who had ever heard of such a thing?

Then, as if satiated and a little dizzy from this unexpected good fortune, she turned to view the landscape he was pointing to, the place where they had been born and had grown up—far into the distance and down, down below—and where the others would be searching for them at that very moment. It was indeed beautiful, very beautiful. They nodded their heads pensively, their minds elsewhere; they saw things that they didn’t see when they were down there, and they spoke, spoke under their breath, or recalled various things that brought them a sudden elation or a strange pang of anguish.

Now completely silent, the brother held out his hand to his sister, and like two shadows they slipped down into the nearest ravine. It would grow dark again and they were clueless.

We are somewhere in the north of the country, in a green and fertile stretch of land, once a renowned crossroads between provinces even more renowned, such as Bisaltia, Mygdonia, and Crestonia, where reliable sources inform us that during the 1868–69 academic year, there was a Boys’ School with thirty pupils, a Girls’ School with fifty-one pupils, and an inter-instructional school with eighty-nine children—and by the beginning of the century, these three institutions among them boasted five teachers.

In that time and place, then, when the boys reached the age of twelve, they weren’t sent to war exactly—or to the temple to confront wise old men and ultimately the sins of mankind, not something in any case to be scorned. They were dressed in fine black-and-white garments, underwent a mock shaving—little bridegrooms, inexperienced and bewildered—and were led to the yard outside the house to slaughter their first beast, an act that symbolized any number of things, both obvious and inscrutable.

The ritual called out to all, as it will also call out to us, to watch it, as the knife gleams in the clumsy right hand, and gleams even more since the narrow place, before the boy arrives in the yard with his retinue, is quite dark and damp, covered with red earth, and extremely quiet, disturbingly quiet at that hour: day breaks…and gently it asserts itself and prevails.

The newborn beast about to be slaughtered—a lamb or kid being the most suitable for the occasion—waits sprawled out on the ground or on a bed of straw, its legs bound in pairs. Twisting its neck strangely, as if having discovered this ability only today after losing the use of its legs, it watches every so often the boy coming toward it, either by chance or with unexpected concern. And it opens its mouth to bleat, or changes its mind and closes it again in bewilderment (really?), intensifying in one way or another that sense of awe and menace that there is in the air and that grows ever more oppressive all around it…It jerks with little sting-like spasms, licks itself, feels ecstasy or inertia, or again gazes elsewhere, over its shoulder—various scenes play with its attention in these surroundings—and suddenly it again catches sight of the boy, who in turn twists his neck and shoulders and, disconcerted, watches the lamb, which presently he must slaughter, from an ever shorter distance…

There were boys who had no objection to this, who had no great objection, who took it quite lightly. Yet by the time they had focused their thoughts on what was about to happen, they found themselves with bloodied hands, knees, cheeks, and would never in their lives be able to say what actually happened then. Yet they would talk of nothing else, as the saying goes, until some other experience like the army or first love came to overshadow that of the first slaughtering…There were some twelve-year-olds who completely lost their senses that morning and some who never found them again. In other cases, boys wronged by nature, somewhat retarded in mind, with strange manners and gait, or excessively naive and moonstruck never looked back after this act, and no one dared make fun of them ever again. Of course, there were many who never made it to twelve, and others who did but whose fear lent wings to their feet and they escaped…Almost infinite cases, but whatever might be said, the custom lived on and prevailed and it would lose none of its power over time other than—even if it sounds paradoxical—to time itself.

In the house in which Thomas was born, almost every year there was someone who became twelve years old, so that they said of their yard that it was soaked in blood. These children were offshoots of an indescribable tree, eddies in a merciless whirligig: a family so multifarious and with such flexibility in marriages and deaths, in successive marriages and deaths, official and unofficial, producing so many children that to count them requires the fingers of both hands, and more than twice. When we think about it—and as this event had also triumphed in the previous generation and is being faithfully repeated in a third to date—it resembles the moves and unpredictability of an intricate game, of one of those plans whose conception, they say, belongs to the devil.

Thanassis Valtinos, author of Orthokostá, was born in the Peloponnese, in southern Greece. He has established himself as one of the country’s most innovative writers, revered and imitated by many. Jane Assimakopoulos is an American-born translator living in Greece. She is currently a translation editor working on a series of books by Philip Roth. She lives in Greece. Stavros Deligiorgis is a University of Iowa professor emeritus in English and Comparative Literature. He is the author of books and articles on literary theory and translation. Stathis N. Kalyvas is Arnold Wolfers Professor of Political Science at Yale. He is the author of, among other books, Modern Greece: What Everyone Needs to Know, The Logic of Violence in Civil War, and The Rise of Christian Democracy in Europe.

Zyranna Zateli, author of At Twilight They Return, is a well-known writer, radio actor and producer, was honored in 2010 with a Lifetime Achievement Award from the Academy of Athens. She lives in Greece. David Connolly is an award-winning translator and former professor of translation studies in the School of English at the Aristotle University of Thessaloníki. 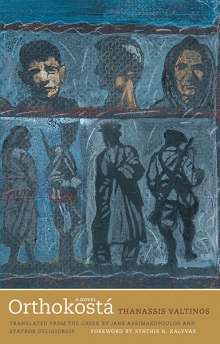 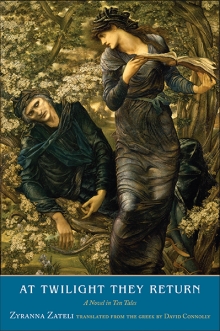