Heading into the holiday season, many Americans will have tickets for The Nutcracker, or at least they will be considering which of the twelve nearby versions to see. The ballet features a Christmas party, children having fun, and candy dances, so why not? At the same time, in this tense post-election season, maybe you’re afraid to gather after the show with friends and family who are this close to throwing food at each other. Remember a time when you were actually able to avoid politics and religion at the dinner table, a time when we did not let candidate choices divide us? The Nutcracker does. To be sure, the ballet means different things to different people, but mostly, it’s the perfect way to come together despite opposing points of view.

This annual Nutcracker has been there for you all along—or at least since myriad versions started popping up in the mid-twentieth century. It may have been born a Russian citizen in 1892, during the golden age of imperial extravaganzas in St. Petersburg, but that’s not really where The Nutcracker came of age. Ballets had to please the ruling class and royalty back then, and no one was impressed by the opening scene at an ordinary Christmas party with children and social dances. The fur-trimmed audiences at the Mariinsky wanted to see more adults doing classical dancing, a more cohesive plot, to simpler music. Yes, that’s right: Tchaikovsky’s rhapsodic score sounded just too complicated for ears expecting the more basic rhythms of previous ballet music.

After mixed reviews and only sporadic repetitions, you might say that the ballet emigrated, as did so many other Russians after the revolution. Here, it first took root in San Francisco in 1944, when Russians in exile encouraged Willem Christensen to do his own Nutcracker for the San Francisco Ballet. By 1954, George Balanchine had mounted his still-thriving version at the New York City Ballet. With its Christmas theme, hummable tunes, and glorious dancing, most versions made enough money to help bankroll the rest of the season, thus becoming a ritual at the same time each December.

In the U.S., The Nutcracker came to be appreciated as an adventure story, where a magical uncle gives the plucky little Clara a carved toy, which then comes to life in her dream. She helps her Nutcracker Prince win a battle against mice at midnight, then he takes her through dancing snowflakes to his native Land of the Sweets. If Russian critics complained that the second-act dances (featuring candy, flowers, and national emissaries) had nothing to do with the plot, American critic Edwin Denby at once saw why audiences took to the ballet. It’s really about bad dreams and awkward social situations vanishing, he said, and we can savor each candyland divertissement before proceeding happily to the next. Interestingly, American movies might have added a new ending to the plot when, after those whimsical dances, Clara often ends up at home in her own bed, just like Dorothy in The Wizard of Oz.

Something else very American happened to The Nutcracker here—it became very democratic. Anyone could stage a version, and many of them started to reflect the diverse parts of an immigrant nation where the aspiration was “freedom and justice for all.” A piñata dance was inserted in the Southwest, a Chinese dragon dance in San Francisco. People of color, previously rare in the ballet world, showed up at the party, and then made their own versions—one was set in an upper Manhattan neighborhood during the Harlem Renaissance; other “urban Nutcrackers” feature hip hop and funk dances. The Louisville Ballet eventually turned the second-act Russian dance into a Kentucky derby-themed race of child jockeys, because The Nutcracker makes itself at home everywhere.

Any Nutcracker can brighten a dark time of the year, with the second act offering a kind of utopia, where people and candy from all over the world get along, all speaking the same language—choreography. After a tough political season, maybe Nutcracker is a start to remembering what we share. While you are sitting amid people who might also fear for the future of our divided country, you might experience moments of what scholars call “communitas,” a warm feeling of togetherness. Think of it as an “imagined community,” where for a while we can all think about our common humanity and hopes.

You’ll want to see The Nutcracker this season, if only to remind yourself of what there is to celebrate—the warmth of families, the vitality of diverse communities, the optimism of children. Your heart will go out to the first couple of Candyland, the Sugar Plum Fairy and her nameless partner, who symbolize the way two graceful adults can come together and dance harmoniously. You’ll feel both peril and hope during the grand pas de deux, danced to what is possibly the best music Tchaikovsky ever wrote. At the end, everyone waves goodbye to Clara, and she finds she has never really left home, where all is calm and all is bright. Maybe it’s still a dream, but it’s one worth cherishing. The good guys win, there’s no place like home, life goes on graciously, and for a few hours, you can happily sit beside anyone, though you may have been on opposite sides the day before. Read into it what you will. The Nutcracker is used to it, and will always be there for you.

Jennifer Fisher is the author of Nutcracker Nation: How an Old World Ballet Became a Christmas Tradition in the New World, and is a professor at University of California, Irvine. 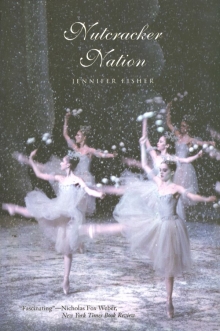