Twelve brilliant short novels, packed with compelling plots and fascinating characters, redolent with literary games of the greatest variety and sophistication, were the author of Don Quixote’s response to his suddenly acquired fame. It was a new kind of book, never seen before in the Spanish language, rivaling the influential collections of Italian novellas then circulating in the Iberian Peninsula, and on a par with the best writing by the literary giants among whom its author lived in early seventeenth-century Madrid. When Miguel de Cervantes published Exemplary Novels in 1613, he was sixty-six years old, an advanced age for the time. He would die three years later, on April 22, 1616, coincidentally on nearly the same date as Shakespeare, but a few days apart because Spain followed the Gregorian calendar and England the Julian. The fact that this book, his third masterpiece if we count the two parts of the Don Quixote (published in 1605 and 1615, respectively) as separate novels, appeared so late in his life says much about Cervantes and the collection of novels that it contains.

In spite of the success that he had with the first part of Don Quixote in 1605, Cervantes did not profit enough from it to overcome the life of penury and disappointment that he had endured until then. Publishers did become willing to bring out his work, and he managed to bring out in short order a collection of his theater, Eight Comedies and Eight New Interludes Never Before Published, in 1615, and in the same year Part Two of Don Quixote. But much of the profit remained with the editors, who also printed posthumously, in 1617, The Trials of Persiles and Sigismunda, the Byzantine romance that Cervantes labored over and enthused about during the last years of his life. Collecting the twelve novels separately in one volume was probably due in some measure to the criticism that he endured for having inserted similar stories in the first Don Quixote, something he refrained from doing in Part Two.

But Exemplary Novels is a work of genius in its own right and would have secured its author a prominent place in the history of Western literature even if he had not written any of his other books. It was an instant success in Spain, where the novels even found their way into the musical theater (zarzuelas), and had an immediate and lasting impact on English literature. Cervantes was a hit in England and elsewhere. Thomas Shelton brought out his translation of Don Quixote in 1612, and César Ouidan, the first complete French translation of the novel in 1614. Shakespeare wrote a play based on the character Cardenio, from Don Quixote, which has never been found. People dressed as Don Quixote and Sancho Panza for fairs and carnivals in Germany and Peru. Exemplary Novels did not fall far behind. Jacobean playwrights Thomas Middleton, William Rowley, and John Fletcher adapted some of the novellas for the stage. Neglected until the last decade of his life, Cervantes then became a prolific literary celebrity.

Exemplary Novels spans nearly the whole creative life of Cervantes. Studies have shown that some of the stories go back at least twenty years from the date of publication, if not more, while others were written in that productive period between the two parts of Don Quixote, 1605 to 1615. The book is like a summing up of Cervantes’s fiction, displaying its broad range of topics, characters, styles, and plots. The order in which the novels appear in the book is not the one in which they were written, to be sure. For that reason, it is tempting to wonder if Cervantes encrypted a message in the sequence that he gave to the book, and the place that each story occupies with reference to the others. The order may also have been determined by the publisher, though even then Cervantes must have had a hand in it. One story, “The Pretended Aunt,” published separately and anonymously but that critics now are almost sure is Cervantes’s, was left out of the volume, which adds a significant detail about the process of selection followed. It is very salacious and somewhat clumsy (an early work?). The resemblances of some of the exemplary novels to the ones that he included in Part One of Don Quixote also adds an intriguing dimension to the arrangement of this collection. It appears to be certain, to me in any case, that the book constitutes a review and totaling up of his oeuvre by an author who knows that he is near the end of his life and wants to leave a significant legacy for posterity, showing the full spectrum of his creative mind.

The stories are an assemblage of literary artifacts of the utmost complexity and sophistication, as Don Quixote had been, presented in such a light, entertaining way that the reader, entranced by the twists and turns of the plots and the antics of the protagonists, hardly notices their artistry. Some of the novels, like “The English Spanishwoman,” are lengthy for the genre, that of the Italian novella, which is how Cervantes uses the term. Novela was not yet available in Spanish in its present sense, it only meant a long short story in the style of Boccaccio, as Covarrubias, who cites the Italian, explains in his 1611 Tesoro de la lengua castellana o española. The geographic settings range from England to the Mediterranean. Italy is featured often, with a focus on Spain, especially Castile and Andalusia, regions of the peninsula that Cervantes knew firsthand, as he did Italy. The historical period is roughly Cervantes’s present. The language, as in all of his work, is elegant without being pedantic, with a rich lexical range reflecting the social and native provenance of the characters. The narrators engage the reader in a friendly, complicit manner that invites following along with the narrative. Cervantes’s style and language are highly accessible to today’s Spanish speakers. Some of the novels in the collection are well-known and widely recognized throughout Spain and Latin America, where they are included in school curricula.

Love is the overarching theme of Exemplary Novels. The plots focus on the adventures of young men and women on their way to adulthood and matrimony. As in most literature of the Spanish Golden Age, everything that happens before marriage is the stuff of comedy while all that happens after, of tragedy. In Exemplary Novels Cervantes offers highly original variants of this broad scheme, sometimes based on traditional tales, such as that of the old man married to a young woman, or new stories, like that of a young man married to a seasoned prostitute who fools him, steals his jewels, and infects him with syphilis. The variety of the stories, as much in plot and character as in their following the available narrative molds of the period, is one of the appeals of the book, which may get its title from being a collection of samples (ejemplos) of novelistic possibilities: picaresque, byzantine, Italianate (comicerotic), and even one, the last one, a dialogue featuring two dogs as protagonists. One way to see Cervantes’s project in this book is as a miniaturization of extant prose-fictional genres that probes into their artfulness and draws out their literary essence by compression. They are exemplary in that way, it seems to me, though there has been much discussion about the adjective “exemplary,” in which some want to see a moralistic intention. But Cervantes never wrote that kind of story. He declares in the prologue: “My intention has been to bring out into the public square of our nation a magician’s table where each person can be entertained, with no harm to anyone; I mean, with no harm to soul or body, because honest, pleasant pastimes are profitable rather than harmful.”

From the introduction to Exemplary Novels by Miguel de Cervantes, translated from the Spanish by Edith Grossman, edited with an introduction by Roberto González Echevarría. Reproduced by permission.

Miguel de Cervantes (1547–1616) was a Spanish author, poet, and playwright most notable for the creation of Don Quixote. Edith Grossman has brilliantly translated many Spanish-speaking authors of the past century, including Mario Vargas Llosa and Gabriel García Márquez. Roberto González Echevarría, Sterling Professor of Hispanic and Comparative Literatures, Yale University, received the 2010 National Humanities Medal from President Barack Obama. 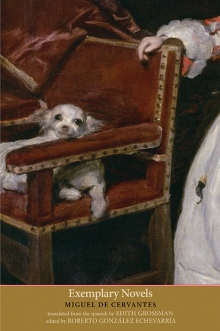