For many, if not most Americans, the Civil Rights Movement of the 1960s is all but synonymous with the iconic litigation that led to the United States Supreme Court decision in Brown v. Board of Education.  Indeed, for many generations of lawyers and social movement activists, the role of adversarial litigation in promoting racial justice has been a key point of inspiration.  But historical memory is short, and the relationship between lawyer-driven adversarialism and racial justice is far more complicated than we have imagined.

In the aftermath of the Civil War, the victorious North struggled with the problem of remaking the South.  Toward this end, Congress established what many have described as the country’s first major social welfare agency: The Freedmen’s Bureau.  Foremost among the Bureau’s responsibilities were the twin goals of restructuring the Southern slave economy on free labor foundations and achieving meaningful equality for African-Americans.  In pursuing these goals, Northern leaders, including Oliver Otis Howard—the union general appointed to head the new agency—paid particular attention to the problem of interracial labor disputes.  Pitting white landowners against their former slaves, these disputes directly implicated the foundations of Southern society and economy and were thus key focal points in the effort to build a new free labor system and to ensure the equal rights of freedpeople.  For precisely this reason, Howard and many individual Bureau agents concluded that such disputes must not be trusted to adversarial litigation.  Lawyer-driven adversarial procedure was too expensive for most freedpeople to afford—and especially in interracial disputes, its presumption of equality of arms was palpably false.  What was needed was a powerful judge who had the discretion to try to do substantive justice instead.

In seeking to establish such a non-adversarial, non-lawyer-driven mode of dispute resolution, Howard and his colleagues looked to an institution then being widely discussed in the American (and British) press: the conciliation court.  The term “conciliation court” was coined by famed philosopher and social reformer, Jeremy Bentham, based on the bureaux de conciliation created by the French Revolutionaries in 1790—variants of which were thereafter adopted by a number of continental European countries and their colonies, including, Spain, Denmark, and Prussia.  As commonly depicted, the conciliation court was a lawyer-free realm in which a local, respected authority figure relied on his high stature to persuade the parties to agree to a compromise, derived from his own communally grounded sense of justice, rather than the formal rule of law.  In the decades before the Civil War, Americans followed these European (and colonial) developments closely, and serious debates arose in several states over whether to adopt some form of conciliation court, including in Florida, California, and New York.  Those who advocated for the establishment of these courts viewed them as a means of addressing the problems stemming from rapid economic change, including most importantly, growing class tensions between capital and labor.  In response, opponents decried them as running counter to a distinctive American commitment not only to political liberty but also to free enterprise.  The adversarial adjudication of legal rights in established courts of law was key, they asserted, to American freedom and prosperity.  As of mid-century, the opponents of conciliation courts were largely triumphant.  Sustained efforts to establish conciliation courts resulted in many legislative enactments and even constitutional amendments at the state level, but such institutions ultimately failed to take meaningful root.

But this was to change, if only briefly, with the ensuing cataclysm of the Civil War.  Northern architects of Reconstruction, like Howard, were intimately familiar with the debates over conciliation courts that had taken place before the war.  And throughout the 1860s, both the American and the British press extensively discussed one particular form of “conciliation court”: the French labor courts, or conseils de prud’hommes.  These courts, which brought together lay representatives of capital and labor to help resolve labor disputes, were widely praised as key tools for quelling rising class conflict in the era of industrialization.  And from the Northern perspective, the post-bellum South—with its burgeoning confrontations between white landowners and penniless, recently freed slaves—embodied this conflict in the starkest possible form.  As Howard and other Northern leaders understood it, the great virtue of the conciliation court, in contrast to adversarial proceedings, was precisely that it placed power in the hands of the judge, rather than the parties’ lawyers.  Differences in wealth and status, which translated all too easily into the litigants’ respective abilities to hire effective (or any) counsel, were thus significantly mitigated.  Moreover, from the Northern perspective, the power entrusted to the conciliation judge consisted simply of common-sense-based persuasion, aimed at teaching the virtues of free labor and equality.  The model of the conciliation court thus enabled Northerners to imagine that true Reconstruction could somehow be achieved without the further use of force.  White Southerners themselves, however, were under no such illusions.  Determined to preserve their racial privilege, Southern whites (and their Democratic allies to the North) resuscitated antebellum claims about the inherently un-American nature of conciliation courts and of non-adversarial proceedings more generally—and they successfully deployed these against the Bureau and its courts.  Thus, while the Bureau Courts resolved hundreds of thousands of disputes and made a real difference in the lives of many freedpeople, they were dismantled after only four years and never succeeded in their ultimate goal of achieving true racial equality.  What followed was the rise of the Jim Crow system of racial segregation and a reinvigorated commitment to due process, enshrined in the newly ratified 14th amendment to the United States Constitution and now envisioned in expressly adversarial terms.

This forgotten history bears recalling.  We live in a period when millions of Americans are required to forgo legal relief because they cannot afford a lawyer to help them file and maintain successful suits for tortious conduct, consumer fraud, and the like.  Indeed, many are too poor even to file for bankruptcy.  At the same time, new social movements have emerged in which appeals are made to deeply cherished values of religious liberty often in pursuit of an agenda of exclusion, rather than inclusion.  And those involved in these movements have discovered the power of adversarial litigation to advance their goals.  In this moment, we would be wise to recall that while adversarialism and justice sometimes walk hand in hand, they are not one and the same.

Amalia D. Kessler is the Lewis Talbot and Nadine Hearn Shelton Professor of International Legal Studies at Stanford University.  She is the author of, among other works, A Revolution in Commerce: The Parisian Merchant Court and the Rise of Commercial Society in Eighteenth-Century France, which received the American Historical Association’s J. Russell Major Prize for the best book in English on any aspect of French History.  She lives in Los Altos, CA. 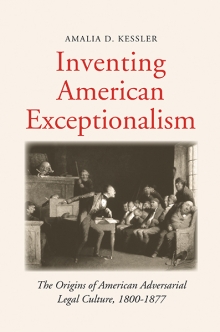