Up until the eighteenth century, Asian people appeared white to European eyes. Sometime early in 1515, a Portuguese merchant named Tomé Pires sent a detailed account of his three years of Asian travel to King Manuel I and described the people he met there as “white, just like we are.” That was how Marco Polo described them at the end of the thirteenth century, and how European travelers would continue to describe them for hundreds of years.

In 1785, a close friend of George Washington wrote to him about a group of Chinese sailors, commenting on their various skin colors. Those from the North were lighter skinned than those from the South, he told the soon-to-be-president, but “none of them are of the European complexion.” Washington wrote back with some surprise: “Before your letter was received, I had conceived an idea that the Chinese…were white.” Indeed, most educated Westerners, almost none of whom had any personal experience of Asians, had “conceived” the same thing. For about five hundred years—from the end of the thirteenth century to the end of the eighteenth century—they almost all believed, like Washington, that Asians were “white.”

By the time of publication of the magisterial eleventh edition of the Encyclopaedia Britannica (1910-11), a considerable range of skin colors were recognized among the large population of China, but the encyclopedia insisted that “yellow, however, predominates.”

Chinese and other East Asian people had slowly but unmistakably become yellow in the Western imagination, so much so that the most authoritative encyclopedia in the English language could make its carefully calibrated claim as a seemingly neutral assertion of fact. One might say it is a jaundiced opinion, seeing yellow where it isn’t there.

And yet “white” people had already begun to see it as a threat. The German Emperor Wilhelm II is usually credited with coining the phrase “yellow peril” (die Gelbe Gefahr) in 1895, though it almost certainly was being used earlier. Kaiser Wilhelm, however, gave it currency, insisting on the need for “the white race” to be prepared to resist “the inroads of the great yellow race.”

Wilhelm commissioned a large oil painting with the title “The Yellow Peril,” depicting white, female warriors, led by the archangel Michael, bathed in light from a radiant cross, mustering to defend Europe from the fierce storm that was thought to threaten it from the East. Wilhelm had multiple copies of the painting made, which he then sent to other European heads of state as well as to the American President McKinley, while engravings of the image were quickly made and widely circulated in popular magazines.

The large number of Chinese people arriving in the United States in the second half of the nineteenth century had already raised the specter of a dangerous immigrant crisis threatening the West. But with the Japanese military defeat of China in 1895 and Russia in 1905, the perceived threat refocused and intensified. “Remember my picture,” the Kaiser wrote to the Russian Tsar in 1907; “it’s coming true.” Ironically, within seven years, there would indeed be a devastating world war. Not the apocalyptic clash of civilizations that the Kaiser had predicted, but a war of a divided Europe.

By this point, Asian people had been homogenized and demonized. As Jack London infamously wrote in 1904 for William Randolph Hearst’s San Francisco Examiner, Asian people had become“that menace to the Western world which has been well named the ‘Yellow Peril.’” Already a cliché of xenophobia and racism, the phrase would continue to be variously deployed and variously envisioned. Asians were imagined as a numberless “horde” of faceless yellow bodies; or memorably individualized in “inscrutable” fictional villains like Fu-Manchu (“the yellow peril incarnate in one man,” as his creator said); or stylized into sinister metaphors, as in Erich Schilling’s striking cartoon of a grinning, slant-eyed yellow octopus encompassing the entire globe in its grasping arms.

To oversimplify (but not very much), Asian people looked white to Western eyes mainly when they seemed to be candidates for conversion to Christianity, as with the sixteenth-century Jesuit missions to China and Japan. They became yellow only when they seemed to be a threat to Western moral values and economic interests. Imagined moral qualities somehow got mixed into the imagined color of their skin. They become yellow—not the highly saturated, cheerful yellow we are all familiar with (think of “happy faces”), but a yellow that seems sallow and sickly, darkened less by melanin than by misgivings. This set of associations projected Western anxieties and bias. Yellow became the color of corruption and cowardice, of duplicity, degeneracy, and disease. This yellow was a color produced by prejudice, not pigmentation.

Similar stories could be told about how the indigenous population of North America became red, Africans became black, and Caucasians came to be thought (or to think themselves) white. The color-coding of race now seems to us more or less natural—at least until we take a step back.

People are variously colored, but they never are the color that putatively identifies them racially. No one is actually yellow, red, black, or white. Color turns out to be a remarkably inexact index of racial identity, perhaps the least telling of the biological markers that have been used to build our taxonomies of race; and yet it is still the one we most commonly employ. In the complicated and often corrosive politics of pigmentation, color is almost always a social fact more than it is a visual one. We are all “colored” people; we are just not the colors people say we are.

David Scott Kastan is the George M. Bodman Professor of English at Yale University. He has written widely on literature and the arts in general. Among his many publications are Shakespeare and the Shapes of Time, Shakespeare after Theory, and A Will to Believe: Shakespeare and Religion. He is also one of the general editors of the Arden Shakespeare. 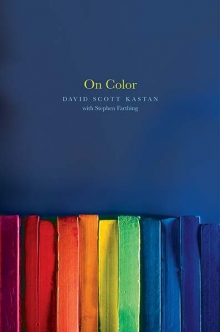