Our lives are saturated by color. The sky above us is blue (or gray or pink or purple or nearly black). The grass we walk on is green, though sometimes it is brown. Our skin has color, though not exactly the color we normally ascribe to it. Our hair has color, even if that color inevitably changes with time—and may change again with the skill of our hair colorist. Our clothes have color; our furniture and our houses, too. Our food has color; so do milk, coffee, and wine. Color is an unavoidable part of our experience of the world, not least as it differentiates and organizes the physical space in which we live, allowing us to navigate it.

We also think in (or, maybe better, with) color. Color marks our emotional and social existence. Our psychological states have color: we see red, feel blue, are tickled pink, and, not infrequently, are green with envy, particularly when confronted by those so tickled. Gender is distinguished—maybe even shaped—by color: we dress baby girls in pink and baby boys in blue, though at one point in history we did it the other way around. Class has color designators: there are rednecks and bluebloods, though bluebloods often declare their blue blood with their resistance to all vivid colors—even blue. The political world is demarcated by its colors: for example, the polarized red and blue states in America, and green parties now almost everywhere committed to environmental causes.

But for all color’s inescapability, we don’t know much about it. There is no comparably salient aspect of daily life that is so complicated and so poorly understood. We are not quite sure what it is. Or maybe it is better to say we are not quite sure where it is. It seems to be “there,” unmistakably a property of the things of the world that are colored. But no scientists believe this, even though they don’t always agree with one another about where (they think) it is.

Chemists tend to locate it in the microphysical properties of colored objects; physicists in the specific frequencies of electromagnetic energy that those objects reflect; physiologists in the photoreceptors of the eye that detect this energy; and neurobiologists in the neural processing of this information by the brain. Their disagreement, or, more accurately, the mismatch of their inquiry, seems to suggest that color inhabits some indistinct borderland between the objective and the subjective, the phenomenal and the psychological. Crudely put, the chemists and physicists operate on one side of the boundary, the physiologists and neurobiologists on the other. Philosophers, at least those who think about the ontological question of color (that is, what is it?), function in all this somewhat like NATO peacekeeping troops patrolling the borders and are successful mainly when they are clearly neutrals, with their own interests of little concern to the disputants.

For artists, the precise scientific nature of color is more or less irrelevant. What matters is what color looks like (and also, and not to be underestimated, how much the paint costs). The artists are, one could say, the indigenous population, largely uninterested in the scholarly debates but who have been successfully cultivating color for millennia in order to survive.

The rest of us, with no professional stake in the matter, are for the most part color tourists. We enjoy what we see, take the occasional color photo, and, happily, are at no risk from the conflicts.

The lack of a coherent and unified understanding of color reflects the fact that all the individual disciplines concerned with color are studying and solving distinct problems. The word “color” functions differently for each of them, and it is defined by each in carefully specified ways that appropriately reflect and clarify the concerns of the particular discipline, even if this only reveals how fractured our understanding of color is.

But this admittedly hasty disciplinary overview should not be taken as a version of “The Blind Men and the Elephant.” Each field of inquiry might possibly be thought to correspond to one of the blind men accurately describing that part of the elephant he has touched but failing to realize how incomplete his experience of the whole has been. That isn’t the case here.

Usually in this familiar children’s story there is a framing narrative of the king and his court, who are watching and much amused by the scene of each blind man confidently describing the elephant in terms of which part he is feeling. One man thinks the elephant is like a snake because he is holding its tail; another, rubbing the elephant’s tusk, believes the elephant is like a spear; and another is certain that the animal must be like a large tree, as he has wrapped his arms around one of the elephant’s legs. In the story, the blind men are all wrong, mistaking what is a mere part for the whole. But the point is not that we need—and it is certainly not that we can provide—some regal perspective that would allow us to see the elephant in this room in its entirety. Our point here is exactly the opposite: that color, unlike an elephant, cannot be understood as a coherent whole.

That is, the scholarly thinking about color doesn’t so much offer us a set of partial perspectives that can be combined to provide a comprehensive understanding of color as much as it reveals a fundamental disunity that defines the subject. There are no blind men in our story, and in fact, there is no elephant. There is only the extraordinary enigma that is color, a topic blind men perhaps should stay away from.

From On Color by David Scott Kastan with Stephen Farthing. Published by Yale University Press in 2018. Reproduced with permission.

David Scott Kastan is the George M. Bodman Professor of English at Yale University. He has written widely on literature and the arts in general. Among his many publications are Shakespeare and the Shapes of Time, Shakespeare after Theory, and A Will to Believe: Shakespeare and Religion. He is also one of the general editors of the Arden Shakespeare.

Stephen Farthing is an artist, an elected member of the Royal Academy of Arts in London, and an Emeritus Fellow of St. Edmund Hall, the University of Oxford. 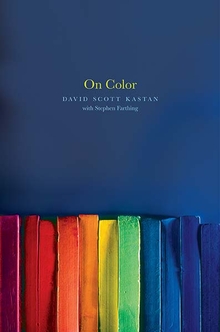