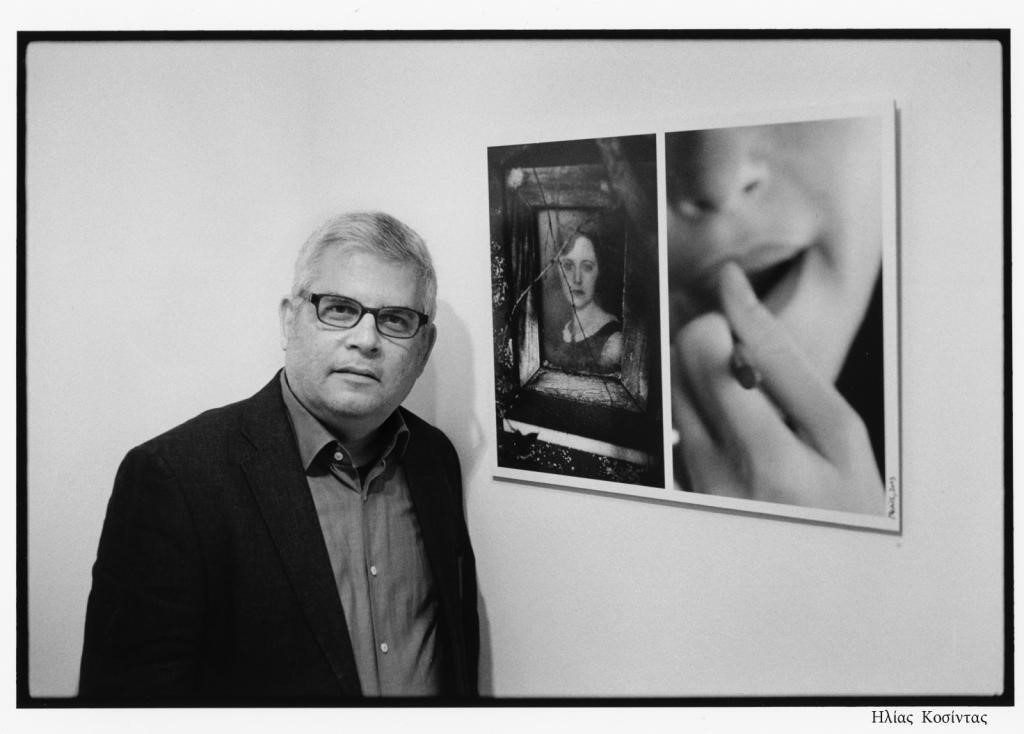 Earlier this month, Yale University Press published Mechanisms of Loss by Michel Faïs, translated from the Greek by David Connolly, a duet of provocative novellas that examine contemporary Greek identity and postmodernity. To mark the occasion, editorial intern Matthew Blake sat down with Michel to discuss the novellas and explore questions of form, plot, biography, and the creative process.

MB: How would you characterize the form of these two novellas? Can you speak to writers or artists who have influenced your relationship with form?

MF: As time goes by, I find myself more and more interested in theatrical prose: in the prose of cinematography, photography, architecture, music, contemplation, poetry, diaries, and letters, the prose of silence. The stylistic coordinates of these two novellas are situated amidst these types of prose. I think that, perhaps, this is how someone might talk, in the most holistic way possible, about the internal and external dismantling of our lives, about all those mechanisms of loss that define us.

Franz Kafka can be found at the core of the narrative of these two texts, along with his great epigones: Beckett, Pinter, Bernhard, and Handke. On their broader cultural horizon the texts intersect vaguely with the films of Michelangelo Antonioni, Robert Bresson, John Cassavetes, and Wim Wenders; the music of Gustav Mahler, Miles Davis, John Cage, and Arvo Pärt; or the bursts of thought of Spinoza, Kierkegaard, Levinas, Bergson, and Hannah Arendt; but also the painterly gaze of Marc Chagall, Alberto Giacometti, Francis Bacon, and Edward Hopper.

Words save us from truth. When we have the words for a thing, when we feel that we describe something exactly, we feel, at the same time, that the thing itself kicks us away, that it expels us from its meaning, that it abandons us in its own empty representation. In a strange sort of way, at the same time, the thing becomes the kick, the expelled meaning, its embalmed image. Even more so when that same thing, the thing you’re called upon to describe, is like resignation in flight, consumption in fear, devotion in panic (25).

MB: The question of words and their ability to capture truth becomes more complicated in the context of translation. Can you speak to your experience of the novel in English? How has your story changed in translation?

MF: Truth, authenticity, the untold may very well lie outside the realm of words. And this is because words—necessary, crucial or untapped words—have actual weight but also bear the weight of absence. As such words are born, they fall in love, they learn or ignore, they get hackneyed, they get sick, they die. At some point they are resurrected or they go on living half-dead in stories, in narration, in books.

As regards the translation, it is by definition a re-creation. Transporting a text, and more precisely, uprooting a text from its biosphere and replanting it in different soil and in a different climate requires a pair of experienced hands. However, if the agriculturist and gardener is David Connolly, the outcome is guaranteed. David and I have known each other for a long time, and once more we have worked very well together. His translation was read by people more proficient than I am; they found that it flows nicely; it is precise and sensitive. To begin with, though, in order for a translation to materialize, a channel of communication is required—especially when one writes in a “minor” language. This channel of communication was generously provided by the Yale University Press’ Margellos World Republic of Letters series, a series with high standards and of substantial value for literature from around the world and for Greek literature translated into English.

Throughout the first novella, there are many references to the protagonist’s Jewish heritage. Can you speak to role of these references to Judaism?

I was born in Komotini, Thrace, a multicultural and multireligious city close to the Greek-Turkish border. Prior to the Shoah, Christians, Turks, Jews, Armenians and Romani lived together there. I grew up in a liberal and religiously tolerant environment (my father was Jewish, my mother Christian). My Jewishness is linked to the closeness I feel towards writers of Jewish descent (Isaac Bashevis Singer and Saul Bellow, for example, both very familiar to American readers). But first and foremost it is linked to the Holocaust trauma, which is part of my collective memory and historical identity. The Faïs family (my father’s side) lost six members to the Holocaust. The closing of the first novella depicts a difficult return to my birthplace, an almost torpid return to my childhood, to the lost Jewish community of Komotini—an elegy for the Jewish people of Greece who perished (87% of all Greek Jews), but also for the unimaginable gloom of existence that ensued in the face of such historical darkness.

…most of them, however, legions of words, want to stuff themselves with silence, to seal their mouths, to no longer signify what they signify, given that for so many frigging centuries they’ve been signifying what they frigging signify, where’s the good in it, where’s the progress? Did it make anyone better? Was anyone saved from himself or from his neighbor? If anyone has ever felt more replete, more self-sufficient, more serene after coming out with precise or pithy words, let him raise his hand. A forest of no hands (65–66).

MB: These lines from Lady Cortisol reflect on the meaning of literary creation in the lives of writers and readers. How do you understand the role of the writer in his/her social context? What does the writing process do for your life? How does language become free of fixed signification?

MF: A writer tests words on himself. He tests them on his skin, on his memory, on his soul. And on the skin, memory, and soul of his characters. Words that are sharp, colloquial, misleading, toxic, unthinkable, dark. The more a writer is immersed in himself, the more he opens up to the world: to reality and to the world of words. Both the private and the public gaze of a writer is—luckily—worked over by the narrative gaze. For me, writing is linked to a half-erased image of tumult. Every time I write, I see my reflection therein. To be more precise, I dive into this old turmoil, like a swimmer diving into a rough sea. Sometimes I get exhausted, sink and drown. Sometimes, though, I reach a kind of shore. I take deep breaths and move on to the next book, to my next swim into the rough sea of fiction, of the self, and of the world.

Something more. There are some days when I feel missing, I feel that I’m a missing person, one who was lost, forgotten, or perhaps one who pretends to be lost or distracted in order to escape from something, to slip away from something that she can’t exactly define, with the result that she wanders aimlessly for a long time in various places, some familiar, some unfamiliar, some neither familiar nor unfamiliar (79).

MB: This quotation from Lady Cortisol offers a potential linkage between the two novellas. In these lines, the female protagonist speaks to a deep sense of alienation from herself and her world. The male protagonist in Aegypius monachus also struggles with an acute feeling of existential lack. How would you describe the connective tissue between these two works? As with two paintings in a diptych, how does bringing these two novellas together in one text reshape the meanings and impact of both stories?

MF: These two novellas, albeit written more than 15 years apart (Aegypius monachus in 2001 and Lady Cortisol in 2016), are linked by that same pressing need that I have had ever since I started writing: how can one speak of things (dysfunctional, cancelled, extreme) and of words (that sometimes refuse to mean what dictionaries say they do, and other times merely echo like unpleasant sounds).

In the first novella, we hear a man’s voice recounting the trauma, the silence, the nightmares from the slaughterhouse of family and love. We see an exhausted flâneur of Athens who grumbles until his last tumble, that is until he finds refuge in the ruins of the synagogue of his birthplace, in the dark root cellar of memory. In the second novella, we see a woman who, via an imaginary interlocutor (someone akin to a psychoanalyst, an interrogator, a lover or her split personality), responds to a whole gamut of questions, until she reaches the point where the one who poses the questions and she who answers them merge, and then their dialogue resembles the score of a piece of atonal music. My writing is drawn equally to narrative adventures and to the adventure of narration. Some of the threads that connect these similar yet disparate texts are the loquacity of silence, the strategies of ecstasy, the game of concealment, the focus on dream fragments, and the farce of existence.

The following conversation has been edited and condensed for clarity. The author would like to thank Argyris Papantonis and Andrea Schroth for their translation assistance.

Michel Faïs is a literary critic and editor of the books section for the influential Greek newspaper Efimerida ton Syntakton.